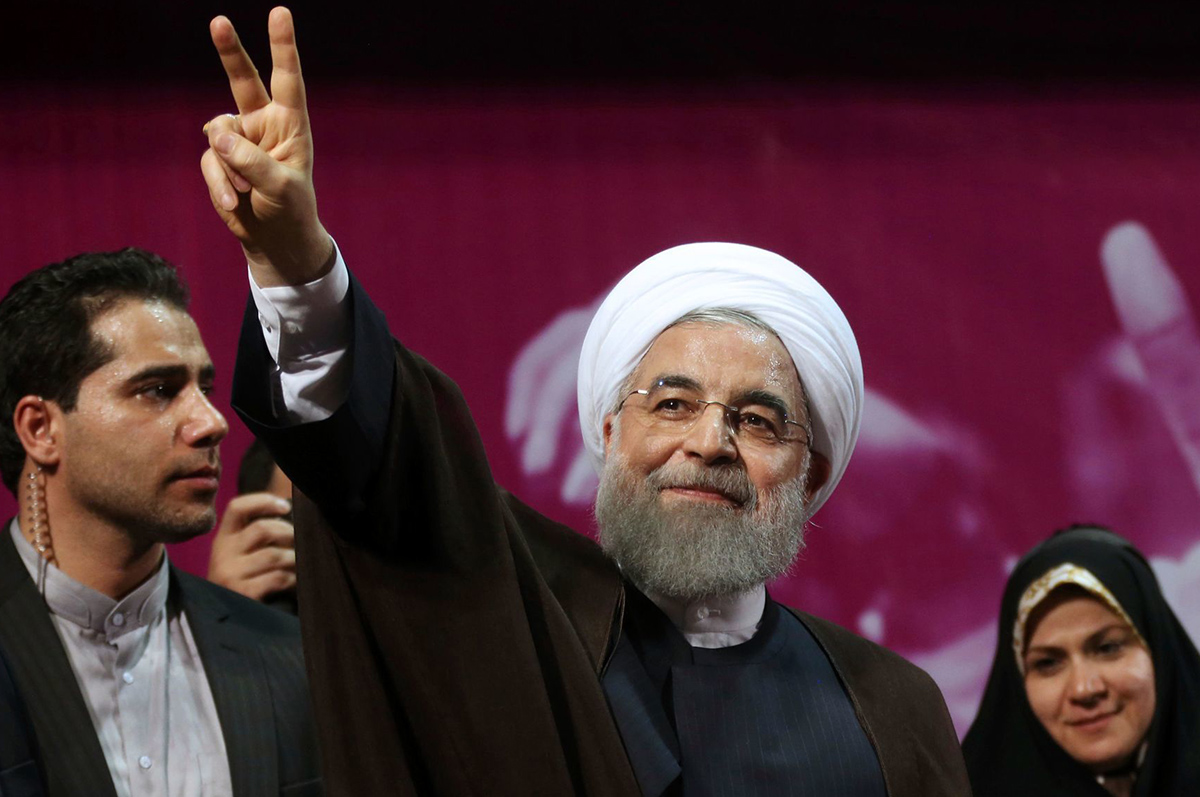 Hassan Rouhani’s victory in the first round of presidential elections in Iran (May 19, 2017), with 57.1 per cent of votes, gives him a strong mandate to continue his work for another four years. The Conservative Ebrahim Raisi (38.3 per cent) also achieved a good result, but with so much support for Rouhani, it was not enough to make it through to the second round. The electorate endorsed the current president’s success in coming to an agreement with the Six Powers regarding the Iran’s nuclear program, and the opening up of the country to the world.

The electoral mobilization of the Iranians and long queues for ballot boxes undoubtedly deserve special attention. 73 per cent of voters took part in the Iranian election, which demonstrates the degree of their commitment. Many people in Tehran, Isfahan and Mashhad (as well as Iranians living outside their homeland) queued for up to three hours in order to cast their vote. Not all of them managed to do so before the polling stations closed. This is a picture both true and cleverly portrayed by the Islamic Republic of Iran (IRI), showing the democratic attitude of the Iranians and their commitment to the state’s affairs. Both victorious Rouhani and the defeated Raisi, as well as the supreme leader Ali Khamenei, defined the nation as the real winner of the election. The involvement of Iranian society can be seen in terms of the chance of survival and the transformation of the IRI, whose political system remains only partially democratic.

Rouhani’s decisive victory seemed unlikely for a long time. The current President had his faithful electorate consisting of people appreciating his (and Foreign Minister Mohammad Javad Zarif’s) efforts to bring about the nuclear deal with the P5 + 1 countries in 2015. As a result of the agreement, it was possible to lift some of the sanctions imposed on Iran. However, after this unquestionable success, the political impetus of Rouhani and his Cabinet has decidedly slowed down. There have also been complications on the international scene which have delayed the introduction of the provisions of the nuclear agreement. The situation became difficult for Rouhani in 2016 as the United States elected Donald Trump, known for his anti-Iranian statements, as president. Speculation emerged immediately that the Iranian people, somewhat in response, should also elect a head of government who would be ready to tighten the course toward Washington. The incumbent president also faced criticism from conservative circles who accused him of ineffectiveness and an inability to manage the economy. Meanwhile, the public was critical about his failure to meet his election promises (including the lack of action to release the so-called Green Movement Leaders of 2009). Rouhani was criticized for his general passivity in internal politics. Nevertheless, on the political scene, no real contender appeared for a long time, whether conservative or independent. Emotions rose a few months before the election as a result of the former president Mahmoud Ahmadinejad’s declaration that he wished to become an independent presidential candidate. The disqualification of his candidature by the Guardians Council of the Constitution a month before the election confirmed that he is currently in political exile. Furthermore, in the last months before the election, the conservative cleric Ebrahim Raisi, the head of the influential Astan-e Quds-e Razavi Foundation from Mashhad, gained a lot of attention. He began to criticize Rouhani’s group quite fiercely. In the media, Raisi quickly gained popularity and thanks to his charisma he began to overwhelm the conservative candidate from 2013, Mohammad Bagher Ghalibaf, who was informally the favorite of the conservative camp.

Why Rouhani? A key move of Teheran’s Mayor

Ghalibaf, the Tehran-based mayor standing in the previous election, with a decent result (16.5 per cent), withdrew from the rally one week before the election, endorsing the conservative cleric. This move, although bringing more votes to Raisi, paradoxically proved decisive in bringing about Rouhani’s victory already in the first round. Only a few weeks earlier Ghalibaf, despite Raisi’s rising popularity, was cited by some polls as the strongest of the conservatives with a backing of up to 37 per cent (a study conducted by ISPA, April 22-23). It is worth pointing out in this context that Raisi is considered to be a much more radical conservative than the secular Ghalibaf, who competently manages the Tehran administration and his support among the relatively liberal Tehran middle class is not that bad. Supposedly, contrary to Ghalibaf’s suggestion of withdrawal, a large part of his potential voters cast their vote for Rouhani, allowing the candidate to cross the threshold of 50 per cent.

Another factor that had a bearing on the results was the fact that no candidate was unambiguously identified by Ali Khamenei, the Supreme Leader of the Islamic Republic. It is worth emphasizing, however, that Raisi was the natural favorite of Khamenei in social perception. According to some observers of the Iranian political scene, Khamenei’s public endorsement could, paradoxically, have lowered the candidate’s chances of being elected. In this context, we should remember Ahmadinejad’s claim that his being endorsed ‘Rahbara’ (leader) in the 2009 election cost him around 10 per cent loss of votes.

The international situation – a shadow for joy

During the electoral campaign opinions emerged in some foreign countries that Raisi’s victory would be a better scenario for the international community. It would “expose the true face of the Iranian regime.” Such a scenario has not materialized, and today, the true face of Iran is seen in the streets where crowds are dancing and chanting the name of Rouhani, but also awaiting effective reforms. The conservative politicians will certainly try to prevent this.

The visit of President Trump in the Kingdom of Saudi Arabia on the day of the election results in Iran was extremely telling. The current administration of the United States supports Iran’s rivals in the Middle East, who have been attempting to prevent the country’s growing influence. Meanwhile, Iran, in post-election euphoria, criticizes Saudi Arabia and its other Arab allies for a complete lack of democracy. “We achieve stability not through ‘coalitions,’ but thanks to our society, which, unlike many other [societies], actually votes”, wrote Minister Zarif on Twitter. Iranian voters seem to genuinely believe in Rouhani’s stated aim to bring about international reconciliation, including with the United States, in his second term.

In the history of the IRI, two consecutive terms of office can already be regarded as a norm and, therefore, Rouhani’s choice should not surprise anyone. However, his victory by a bigger majority than four years ago is very significant. The force of progressive circles, formally loyal to the Islamic Republic and the revolution, has been growing. The expectations of a globalizing society are also growing. In the next few years, almost 40 per cent of support for Raisi should not be underestimated. In the event of Rouhani’s cabinet’s failure, this number may quickly exceed 50 per cent. If Raisi continues to be active, and continues to criticize Rouhani, he certainly has a better chance of attracting the conservative part of the society than Ghalibaf, and even Ahmadinejad (who is no longer a conservative; in addition, he has fallen from the supreme leader’s grace).

The post-revolution Iranian regime remains only partially democratic, although it seems to be more stable and flexible, especially when compared to other countries in the region. This is undoubtedly the effect of the pressure of both an active Iranian society and sound analysis of the situation by the unelected leadership of the IRI.

1. A majority of the Iranian society, irrespective of any social group, views and financial status, participates in the elections, thus displaying relative loyalty to the system, in which people clearly indicate the need for reform.

3. The calls for boycotting the elections by Reza Pahlawi and the Mujahideen People’s Organization (MEK, MKO) do not currently find much social appeal in Iran.

4. Rouhani’s position is stronger than it was four years ago.

5. Iran’s progress in reintegration with the West has been consistently slowed down by factors such as the ideological conflict with the United States, Israel and Saudi Arabia, and the alliance between Tehran and Moscow.

6. In four years it will become apparent whether the reformist movement will be able to maintain an important office in the state (though not the most important in the context of the IRI). If so, it will be Rouhani’s great success.

7. Another charismatic politician, Ebrahim Raisi, has emerged on the Iranian political scene, who, if he can withstand the pressure of failure, may play a very important role in the Iranian government in a few years’ time. Especially in the context of possible failures of Rouhani’s cabinet.

8. An attempt to transform an existing system, rather than a further revolution, seems to be the path Iran should follow to benefit both the state and the international community.

9. Care must be taken to monitor the situation regarding controversial programs in Iran. It is important to continue dialogue with Iran as an important Middle East player.

10. One should not forget that Iran remains one of the key players in the war-torn countries: Iraq, Syria, Yemen, Afghanistan, as well as in the Israeli-Palestinian conflict. This is also important in the process of developing solutions to these conflicts.

11. Iran is a powerful market, significant for the development of trade and investment – mainly for the European Union. Maintaining the direction of Rouhani’s policy points to further progress in trade/investment processes, which can be used in the coming years.

12. A constructive policy for Western states (mainly the EU) towards Iran would be to achieve a conflict-free balance between the U.S.’s particular interests in the region on the one hand and the government in Tehran on the other.

ANALYSIS: The economic intelligence system as a crucial factor in the success of the Responsible Development Plan