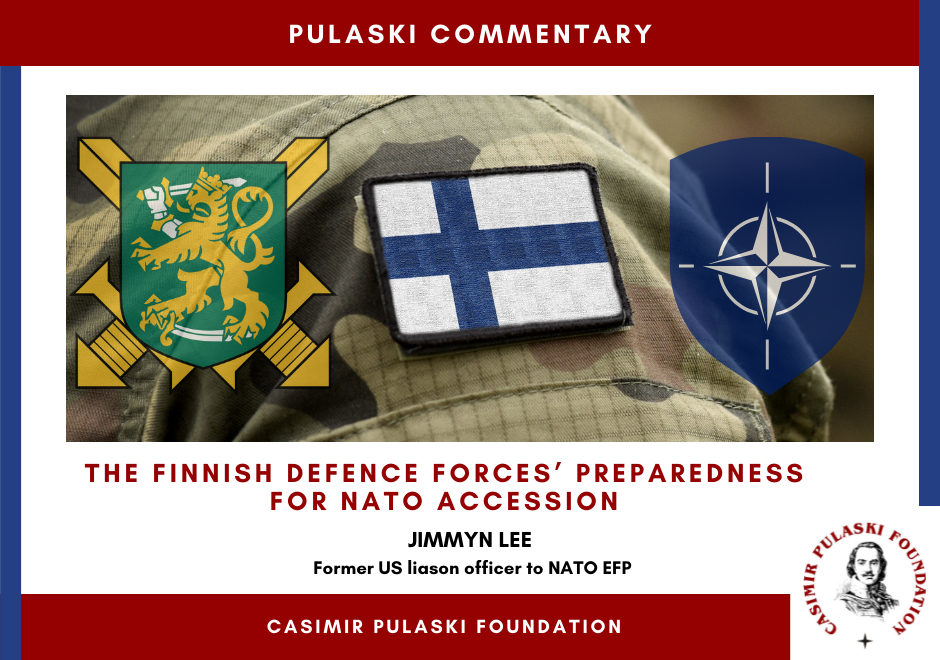 Finland’s bid to gain NATO membership was a direct response to Russia’s February 2022 invasion of Ukraine. This decision was made jointly with Sweden, a fellow militarily non-aligned state, and NATO foreign ministers focused on how to expedite their accession process as much as possible. Finland has participated in NATO’s Partnership for Peace since 1994 and the Enhanced Opportunities Program since 2004. As a result, the Finnish Defence Forces are well-prepared to operate as an Allied military and provide a credible deterrent against Russian aggression in the region.

The Finnish Defence Force’s primary mission has always been the military defence of Finland. As a result, the FDF has remained steadfastly focused on territorial defence unlike many other Western militaries which focused on expeditionary operations. The organizational and institutional implications of this are most exemplified by its system of conscription and retention of reserves. All of the FDF’s elements (the Army, Navy, and Air Force) rely on this conscription system to fill their ranks. Finland’s Border Guard, which falls under the Ministry of the Interior but can be incorporated into the FDF in a crisis, also utilizes conscription.

The FDF is relatively small, with approximately 8,000 servicemembers and 4,000 civilians fully employed in peacetime. However, across the three branches, they train approximately 22,000 conscripts annually. These conscripts are required to serve for 6-12 months, depending on duty and rank, and are then mustered into the reserve until they turn 50 years of age (60 for officers and non-commissioned officers). With such a large part of the population trained, Finland can call upon its reserves to form a fully mobilized force of 280,000 with up to 900,000 more reservists available as fill-in forces. The FDF also invests heavily into keeping reservists trained: 19,000 reservists are to be trained in rehearsal exercises this year with a planned increase in these figures of 9-10,000 for 2023. Additionally, reservists can also be assigned to one of the 28 local defence companies (Territorial Forces) that are tasked to protect strategic targets, conduct area surveillance, and counter-SOF operations. In comparative terms, this system allows Finland to have an operational force, reserves, and local units roughly equal in size to Ukraine’s despite having 1/9th its population (5.5 million to 44 million).

These forces are also equipped on par with NATO members. Since the end of the Cold War, Finland has had agreements with the NATO Standardization Office (NSO) and European Defence Agency to ensure that the FDF and Finnish defence industry manufacturers were modernized to be interoperable with their neighbors. With the purchase of German Leopard 2A4 and Dutch Leopard 2A6 tanks, as well as American F/A-18 combat jets that are due to be replaced by the newer F-35, Janne Kuusela, head of the Finnish Defence Ministry’s Security Policy Department, is correct in saying that “Finland’s military equipment is already more compatible with NATO standards than that of some members.” These acquisitions also make Finland one of the few non-NATO countries that are part of the Link 16 military tactical data link network. Through this NATO standard data link information exchange, Finnish combat jets as well as Hämeenmaa-class minelaying ships can already share their tactical picture in real-time with NATO forces. Similarly, there is already some transparency between the FDF’s airspace management and air defence systems and NATO’s Air Command and Control System (ACCS).

The FDF’s personnel and materiel have also been exercised frequently alongside NATO forces to develop further interoperability. The FDF participates in 60-70 multinational exercises annually with EU and NATO states. This activity is meant to support maintaining, developing, and demonstrating Finland’s defence capability, and as such, most involve regional security in the Baltics and Northern Europe. Some of these exercises are based on NATO Article V scenarios and Finland’s participation has been in the role of a partner country, but the experience and lessons learned simplify the FDF’s transition to operating as an Allied force.

Therefore, there is not much more work to be done to alter the FDF’s organisation or equipment to meet NATO standards the way that former-Soviet states had to in the 1990s. The largest changes to be made involve higher echelon command and control and the integration of Finnish forces into NATO command structures. NATO’s headquarters elements, such as Joint Forces Command-Brunssum in the Netherlands, will require FDF input to evolve the Alliance’s defence plans to incorporate Finland’s entry. A study by the Ministry of Foreign Affairs on the effects of possible NATO membership also mentions an interest in establishing a NATO Force Integration Unit (NFIU) in Finland. NFIUs are small headquarters elements meant to facilitate the rapid deployment of Allied forces to the Eastern part of the Alliance and support collective defence planning. These were a response to Russia’s 2014 actions against Ukraine and have been established in Poland, the Baltic states, Slovakia, Hungary, Romania, and Bulgaria. A NFIU in Finland would not only provide direct communication with other NATO headquarters, but greatly facilitate the deployment of rapid-reaction forces to Finland in the event of a crisis.

Finland’s heavy focus on its territorial defence as a tool for deterrence is the most important direct military asset that it provides to the Alliance and their common defence. It has little need for large flows of foreign aid to develop further interoperability with NATO forces. Its accession to NATO is a low-cost (in both money and effort) endeavor with significant gains to the security of both Finland and the Alliance.

Finland’s system of conscripts and reservists should also not be conflated with the system of Territorial Defence Forces established by Poland and the Baltics. Finland’s reservists train and prepare to form regular FDF units and will be utilised as such by the Defence Command. On the other hand, Polish and Baltic TDFs fall under their own hierarchies and are not meant to integrate with regular forces. Closer cooperation in the future between these states and Finland may yield some lessons for all parties on how these contradictory organisational models can be further improved.