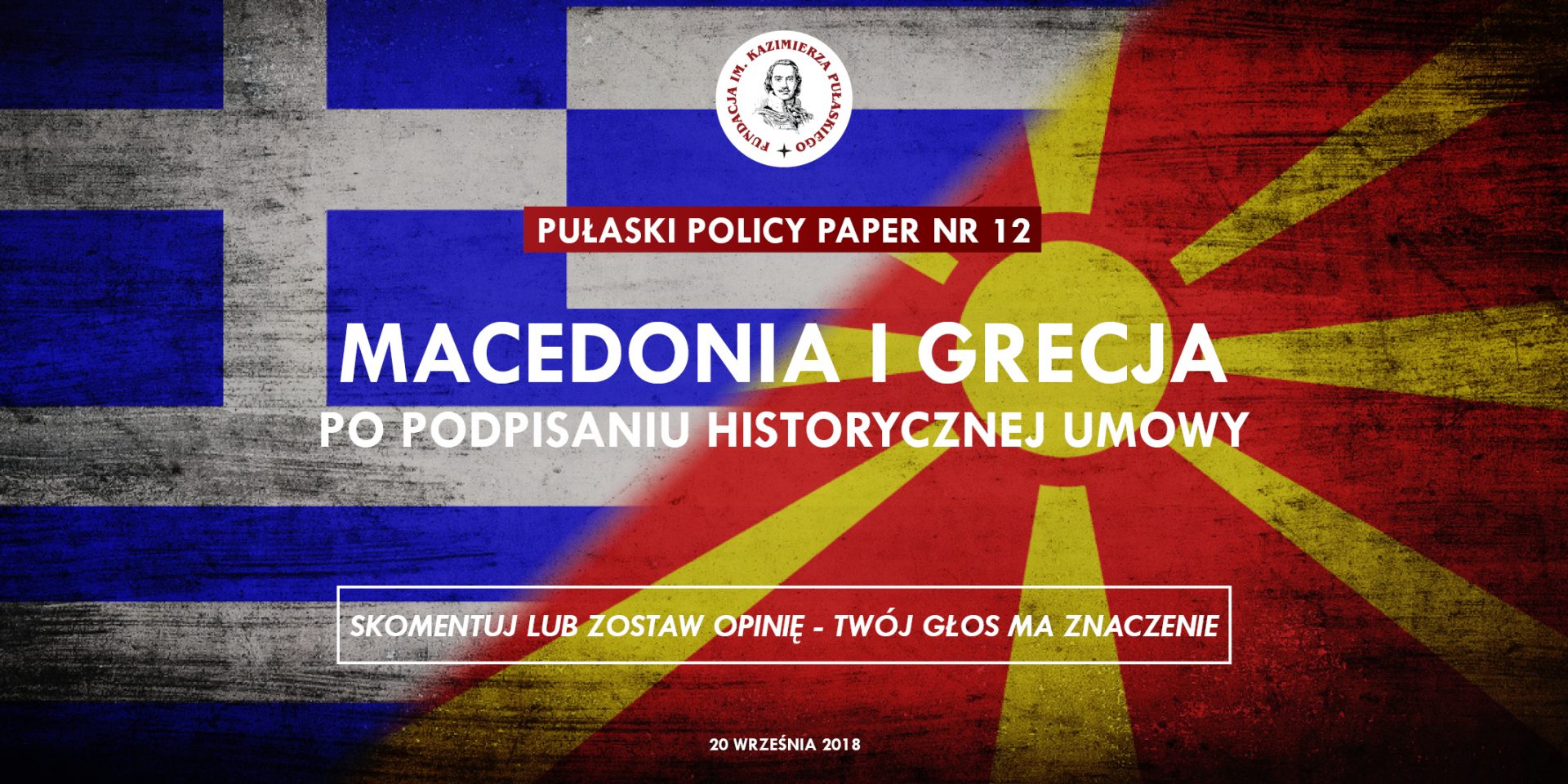 The agreement between Macedonia and Greece puts an end to a long-standing dispute, which impeded Skopje’s international ambitions. Nonetheless, the Macedonians still must overcome several obstacles before they reach their two strategic foreign policy goals – accession to the EU and NATO.

The historic agreement between Greece and Macedonia was signed on June 17th, 2018 by the two foreign ministers – Nikola Dimitrov and Nikos Kotzias, and in the presence of respective Prime Ministers, Zoran Zaev and Alexis Tsipras.  Also present were representatives of the UE – Federica Mogherini (High Representative of the European Union for Foreign Affairs and Security Policy) and Johannes Hans (European Commissioner for European Neighborhood Policy and Enlargement Negotiations) as well as Matthew Nimetz, the UN negotiator. The ceremony took place at Lake Prespa, on the territory of Greece, which borders Macedonia and Albania. As a result, the current international name of the Macedonian state – Former Yugoslav Republic of Macedonia – was replaced with Republic of North Macedonia.  The change ends an international dispute dating to 1991, when Skopje first declared independence.

For the agreement to have a legal effect, it must be ratified by both states. The proposal was approved by the Macedonian parliament on 20th of June 2018, but rejected the following day by president Gjorge Ivanov. The president sided with his political party, the Internal Macedonian Revolutionary Organization – Democratic Party for Macedonian National Unity (VMRO-DPMNE), stating that even the prospective accession to NATO and the UE did not justify signing the agreement, which was against the national interest. Ivanov’s decision was overturned by the Parliament thanks to a constitutional provision, which forces president’s approval if the legislative body votes on an issue for a second time. A re-vote took place at the beginning of July 2018, thanks to the support of PM Zaev’s governing party (Social Democratic Union of Macedonia – SDSM) and ethnic minority parties.

The final decision will be made by a national referendum, scheduled for September 30th, 2018.  The voters will be presented with the following question: “Are you in favor of European Union and NATO membership by accepting the agreement between the Republic of Macedonia and the Republic of Greece?” Prime Minister Zaev repeatedly stressed that while the referendum is non-binding, the will expressed by the nation should be respected by all political parties. Moreover, Zaev said, if the turnout does not reach the required 50%, state institutions will be tasked with making the final decision.

Macedonian parliament already appointed the electoral commission, while the logistic preparations for the referendum are underway. Skopje government also took to social media to garner support for the referendum and the agreement. Moreover, the government reached out to the opposition, hoping it will not boycott the referendum. The ruling party proposed establishing a technical cabinet 100 days before the next parliamentary elections. This would ensure the elections are transparent and fair.

Macedonia’s accession to NATO and the EU

The agreement marks a new phase on Macedonia’s path toward becoming a NATO and EU member state. During the last NATO summit, held on 11th and 12 of July 2018, Macedonia was officially invited to negotiate membership terms in the Alliance. NATO Secretary General Jens Stoltenberg conditioned the accession talks on the decision of Macedonians to embrace the agreement. Without it, membership in the Alliance remains out of question.

Changing country’s name will not the only condition for Skopje to join NATO. Equally as important is the need to overhaul the military, which includes adaptation of force structure to new, hybrid threats. It will be necessary to decommission obsolete equipment and buy modern weapon systems. According to the “Global Firepower” ranking, Macedonia places 118th out of 136 countries in terms of military potential, with 8,000 active-duty servicemen. Moreover, during the 2014 summit NATO countries formally pledged to spend 2% of their gross domestic products on defense. Skopje, whose defense expenditure is currently at around 1%, will have to put considerable effort to reach that goal.

Following the name change, Greece will no longer be blocking Macedonia’s talks with the EU. However, Skopje still needs to meet all the requirements of a potential member state. Last month the EU – under pressure from France and Holland – decided to postpone the start of accession talks with Macedonia and Albania by a year. According to officials in Brussels, this time is necessary for Skopje to overhaul its judicial system and public administration, and to intensify anti-corruption efforts. Provided these changes will be implemented, the accession talks can commence in June 2019. Nonetheless, Johannes Hahn announced during his visit to Macedonia on July 17th 2018, that the screening process has been launched in order to analyze the compliance of local regulations with EU’s acquis communautaire.

Russia seemingly lost much of its former influence in the Balkans. Most of the states in the region are either EU members, or aspiring to join the block. Moreover, most of them are bound to become NATO members, with the notable exception of Serbia. But even Belgrade listed accession to the EU as one of its foreign policy priorities.

Russia’s activities in the Balkans intensified after the Prespa agreement was signed. Both Athens and Skopje accused Russia of interfering in their internal affairs. Macedonia disclosed that local, pro-Russian businessmen funneled 300,000 euro to stir up riots prior to the referendum. According to Skopje, Russia was also conducting intelligence missions and funding propaganda.

The Greeks accused Moscow of inciting opposition resistance toward the agreement, provoking social unrest and attempts to bribe Greek politicians and representatives of the Greek Orthodox Church.  Foreign Minister Nikos Kodzias unequivocally stated that no-one has the right to interfere in internal affairs of the country. Consequently, two Russian diplomats were expelled from Greece, and another two were banned from entry. Moscow reciprocated by expelling Greek diplomats and cancelling the visit of Sergey Lavrov, Russia’s foreign minister.

The bilateral relations between Greece and Russia have a long history, since both are Orthodox Christian countries. Notably, the current government in Athens sided with Moscow following the Ukrainian conflict, and advised against EU sanctions. Moreover, when in March of 2018 NATO states decided to expel Russian diplomats in response to the murder or Sergei Skripal in Great Britain, Athens did not follow suit.

1. The agreement signed by Macedonia and Greece is an event of historical significance. The reconciliation process was very long, and obstructed by social protests in Macedonia and Greece. The agreement proves that even in the Balkans, often described as the powder keg of Europe, conflicts can be resolved peacefully. Implementation of the agreement will stabilize the regional security environment and be a case study for other conflicts, such as the one between Serbia and Kosovo. Moreover, in the long run, the agreement can be a starting point for other stabilization processes in this part of Europe.

2. New protests in Macedonia may start in the fall of 2018, before the planned referendum. Consequently, the government in Skopje should act to garner social support for the agreement. A low referendum turnout or a negative result will be a defeat for Zaev’s government, and may cast country’s international situation into turmoil once again.

3. The agreement with Macedonia will allow Greece to rebuild its position in the EU and the region. The conflict over Macedonia’s name, along with the economic crisis, worked against Athens’s interest. Immediately after the Prespa agreement was signed, eurozone countries agreed to issue the last tranche of financial aid, which kept Greece afloat for the past 8 years. EU agreed to extend the debt repayment period, and swapped some of the older loans with new, more attractive credit lines. However, a partial remittal of debt was not granted, much to Athens’ dismay.

4. Kremlin is likely to continue the past policy of interference in the Balkans. Moscow might be interested in stirring social unrest in Macedonia, inducing chaos in the region and discrediting the Balkans in EU’s eyes. Therefore, the European Union should reinforce current policies in the region and support Balkan states in their path toward membership. Simultaneously, the UE should strive to maintain its positive perception in the region.

5. Poland, as the host of the next Berlin process summit, should carefully prepare for this event. The summit will be a chance to strengthen country’s position in the Balkans and influence EU policy-making in the region. A cohesive EU policy will also enhance economic growth in the Balkans. The decision-makers in Warsaw should prepare a package of proposals on sharing Poland’s experience in relation to economic transformation with the Balkan states.