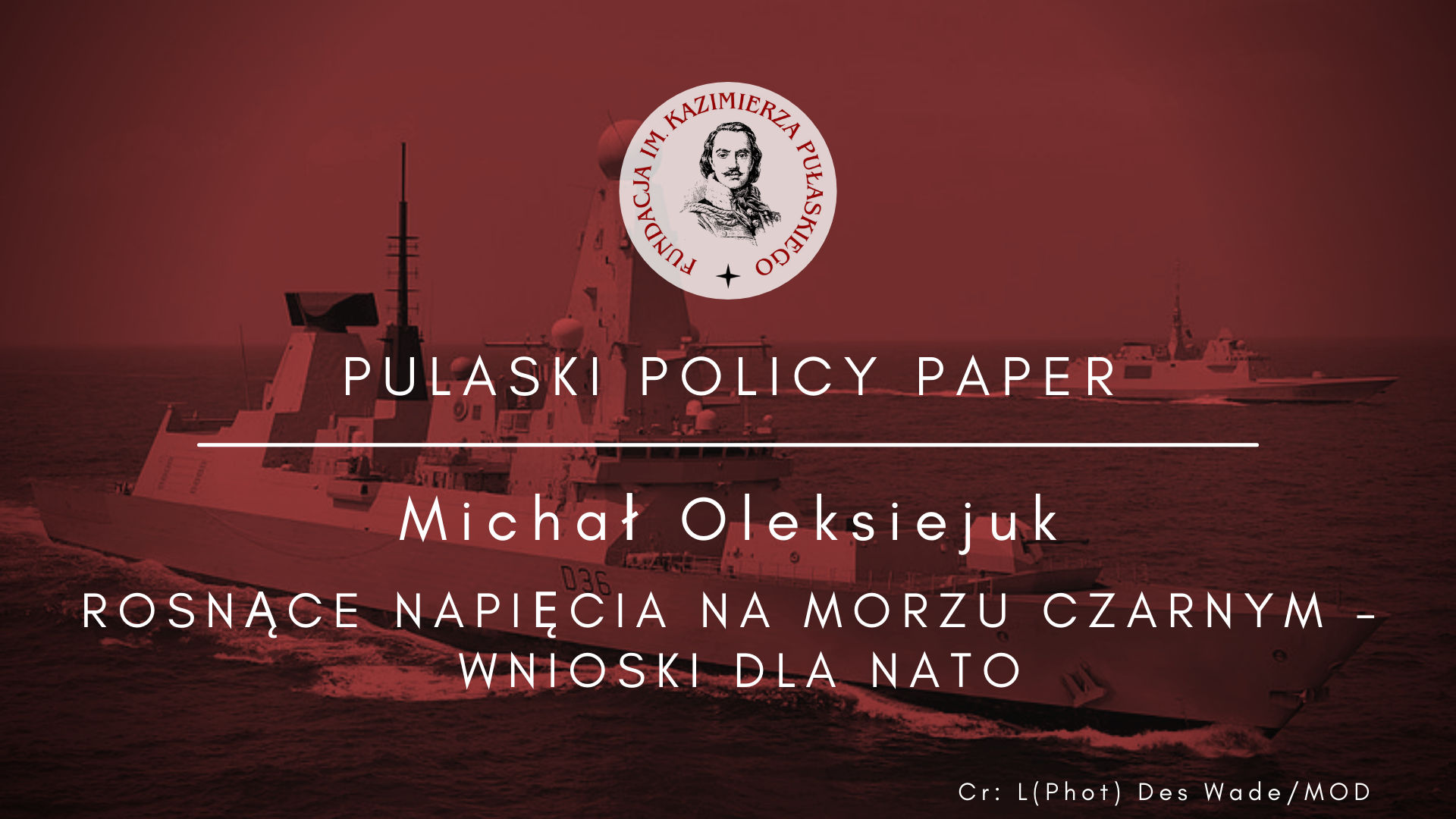 During routine operations in the Black Sea, as part of the British Carrier Strike Group 21 (CSG21), two ships, the British destroyer HMS Defender and the Danish frigate Zr.Ms. Evertsen, encountered aggressive actions by the Russian Federation. Both ships were harassed by aviation and Black Sea Fleet ships. Despite the lack of international recognition in this regard, Russia treats the waters surrounding the annexed Crimean Peninsula as its own territorial waters. Meanwhile, neither the UK nor Denmark recognise the illegal annexation of Crimea to the Russian Federation, hence the decision to demonstrate allied support with the visit of CSG21 ships to ports in Ukraine (as well as Georgia and Romania). The growing presence of NATO ships in the Black Sea is recognised by Russia as a direct harm to its interests and a threat to its own security. The intensification of Moscow’s activities in the region and recent events emphatically demonstrate that the Black Sea will be a field of rivalry between the Russian Federation and NATO states in the coming years.

As part of Operation Fortis, the UK’s Carrier Strike Group 21 departed on an eight-month cruise aimed at demonstrating the UK’s commitment to the security of its closest allies and securing free navigation in international waters. As part of CSG21 operations, the vessels HMS Defender and Zr.Ms. Evertsen entered the waters of the Black Sea before calling at the Ukrainian port of Odessa on June 18. During the transit between Ukraine and Georgia, on June 23 this year, HMS Defender passed through waters near the Crimean Peninsula about 12 nautical miles offshore. Moments later, two Russian coast guard ships established radio communication with the ship and ordered the Briton to leave the territorial waters of the Russian Federation. The captain of HMS Defender did not comply with the orders received, claiming that the waters surrounding Crimea belonged to Ukraine and that his ship was complying with all rules of the international law of the sea. In response, the Russians directed more than 20 fighter jets belonging to the Black Sea Fleet over the ship, which, although unarmed, flew over the vessel in an attempt to force it to change course and leave the waters around Crimea. Following the incident, the Russian Defence Ministry issued a communiqué accusing the British side of violating the United Nations Convention on the Law of the Sea (UNCLOS).

A similar incident had already occurred on June 24 this year, when the Russian air force once again operated dangerously close to the second member of the CSR21, the Danish frigate Zr.Ms. Evertsen. Despite the fact that the ship was in international waters not subject to any territorial disputes, the Russian aviation harassed the ship for more than five hours, including carrying out simulated attacks. In addition, radar equipment and other systems were also disrupted at some point as a result of deliberate jamming. The events of the past few days show a sharpening of Russian rhetoric and actions within the Black Sea against both its neighbours and NATO vessels.

The importance of the Black Sea

Historically, Russia has relied on the Black Sea for centuries as an important centre for importing and exporting goods, especially energy resources. The fact that the basin is rich in as-yet unexploited gas and oil deposits further increases its importance in Russia, for which the commodities trade is an important source of income (the Russian oil and gas market provides 36 percent of the Russian Federation’s budget revenues).[1] From a military perspective, the Black Sea provides an important security buffer between Russia and NATO countries. During the Cold War, the Soviet Union covered virtually the entire basin with its sphere of influence, and the restrictions imposed by the 1936 Montreaux Convention (including those of tonnage and time) on the navies of non-Black Sea states further prevented the US and NATO from operating freely in the area.

The Russian Federation’s influence in the Black Sea began to diminish only after the fall of the “Iron Curtain.” This had to do with both the collapse of the socialist system and Moscow’s shifting geopolitical priorities toward maintaining as much of the former USSR’s territorial integrity as possible. At the same time, the region was undergoing democratic political changes, only to turn almost completely away from its former ally in just three decades. Today, of the six countries with direct access to the Black Sea, two are members of the European Union (Romania and Bulgaria), and three have signed association agreements with Brussels, seeking full membership in the future (Turkey, Georgia, Ukraine). The situation is similar for military alliances. Turkey (1952), Romania (2004) and Bulgaria (2004) are already full members of the North Atlantic Treaty Alliance, and both Ukraine and Georgia have expressed a desire to join the Alliance and are signatories to NATO’s Partnership for Peace. It is therefore no coincidence that it is in both countries expressing interest in both EU and NATO membership that the Russian Federation illegally occupies territory or supports local separatist movements.

As it continues to lose influence in the region, since the beginning of the first decade of the 21st century, Russia has intensified its efforts to rebuild them, while attempting to weaken its neighbours. The prelude to Moscow’s current actions was 2008 and the war in South Ossetia, during which Georgian troops clashed with pro-Russian separatists. The conflict also involved the regular Armed Forces of the Russian Federation, which entered Georgia under the pretext of protecting the Russian minority living in the disputed areas. On the other hand, in 2014, there was a Russian invasion of Ukraine, which also resulted in Russia’s illegal annexation of Ukrainian Crimea. The invasion, as in the case of Georgia, was carried out under the pretext of protecting Russian citizens. Shortly after the annexation of Crimea, the Russian Federation began militarising the peninsula. Modern battlefield isolation (anti access /area denial – A2/AD) systems, such as S-300 and S-400 anti-aircraft systems, Bastion-P coastal defence systems and a Voronezh radar-based early warning system, were redeployed to Sevastopol and other former Ukrainian army bases. The number of fighters and bombers was also increased to 113 including nuclear-capable Tu-22M3 aircraft.[2]

NATO and the Black Sea

With few exceptions, the international community rejects claims that Crimea is full-fledged Russian territory. In order to protest Moscow’s illegal actions and stabilise the situation in the region, NATO and Russia’s closest neighbours have taken steps to better prepare for Moscow’s further offensive actions. The most important arrangements vis-à-vis the situation in the region in this regard were made at the NATO Summit in Warsaw in 2016. It was there that the leaders of the member states pledged to increase the Alliance’s presence in the region through a Tailored Forward Presence (TFP). The TFP provided a rotational presence of Allied troops in Romania as part of an international framework brigade under the Multinational Division Southeast Headquarters (HQ MND-SE), which will command the Alliance’s troops located on its south eastern flank as needed. From the very beginning, Poland has supported Romania in its efforts to strengthen NATO’s presence, as evidenced by the Polish Military Contingent (PKW) Romania, which has been operating since 2017, with Polish soldiers stationed on its territory on a rotating basis. In addition to NATO troops, since 2010, the United States European Command (EUCOM) has decided to establish the Black Sea Rotational Force, with US Marine Corps soldiers deployed to Romania. US fighter jets and reconnaissance unmanned systems were also transferred there in 2021. NATO member states as well as the US also remain actively involved in building the defence capabilities of the armed forces of Georgia and Ukraine.

NATO member states in the Black Sea region (Turkey, Romania, Bulgaria) agree on the seriousness of the threats posed by Russia’s aggressive policies, but each has adopted different tactics of action.

Despite the Ankara-Washington dispute, triggered by, among other things, the purchase of Russia’s S-400 air defence system, Turkey remains aware of the Russian Federation’s expansionist policy and is actively seeking to balance its capabilities together with NATO and other Black Sea states. In response to the Russian challenge, Turkey’s Defence Ministry has developed a concept to significantly strengthen the country’s navy through the MILGEM project, involving the development and subsequent construction of frigates and corvettes capable of reconnaissance and patrol operations, as well as anti-submarine, anti-surface warfare and enemy aviation. At the same time, Turkey is seeking to militarily support other Black Sea states that, like Ankara, fear aggressive actions by the Russian Federation. In the case of Ukraine, Turkey is working closely with its arms industry and supplying a wide range of armaments, from unmanned aerial vehicles to radars. Kiev can also count on Ankara’s political support, which opposes the annexation of Crimea. Turkish military support also goes to Georgia, which with its help is modernising the armaments of its armed forces and improving procedures. Turkey is actively engaged in cooperation with NATO member states, and Turkish ships are engaged in international exercises and patrol missions.

Romania also remains one of the most important points on the military map of the Black Sea region. Bucharest is concerned about Russia’s aggressive policy, which is reflected in an extensive modernisation plan for the country’s armed forces, including purchases of F-16 multirole aircraft or efforts to acquire new ships and air and coastal defence systems. In defensive matters, Romania cooperates closely with both NATO and the United States resulting in the presence of allied troops on its territory. The foreign components include both land units and the aviation and navies of the North Atlantic Alliance countries.

Bulgaria, like Romania, is aware of the threats posed by the current policies of the Russian Federation. Accordingly, Sofia is taking steps to rapidly modernise its armed forces, which currently rely on obsolete Soviet equipment. The purchase of F-16 multirole fighters from the US and the start of the procedure to acquire patrol ships for the country’s navy shows Bulgaria’s commitment to maintaining the balance of power in the region. At the same time, Sofia seeks to maintain correct bilateral relations with Moscow, thereby avoiding explicit statements criticising Russia’s destabilising policies and maintaining extensive economic and political relations with it.

Despite the above-mentioned actions by NATO countries, Russia has not stopped trying to expand its sphere of influence at the expense of destabilising the entire region. An important part of this policy was supposed to be the improvement of Russian-Turkish relations, aiming to push Ankara away from the EU and NATO and include it among Moscow’s allies. This plan has failed due to the numerous points of contention that push the two countries apart from time to time (including Turkey’s cooperation with Ukraine, support for different sides in the conflicts in Libya, Syria and Nagorno-Karabakh).

Nevertheless, Moscow has achieved some successes in undermining allied unity on the southern flank, which include the sale of S-400 air defence systems to Turkey. The increase in sales of Russian oil and gas to Turkey is also worth noting.

The Russian Federation’s confrontational actions against its neighbours and NATO forces in the Black Sea basin will intensify in the coming years. The basin is of strategic importance to Russia, especially in the context of seeking new markets for the sale of its domestic oil and gas, driven by declining demand for conventional energy sources from Europe. The use of the Black Sea ports as a base for Russian intervention in Syria and as a beachhead in Moscow’s search for new allies in the eastern Mediterranean is also of considerable importance. NATO should therefore continue its efforts to strengthen member states and allies in the region, limiting the Russian Federation’s freedom of action. The key to maintaining the stability of the Black Sea is the continued presence of North Atlantic Treaty Organisation forces.