The clash between Russia and the West has increased the importance of Central and Eastern Europe. The role of this region in a new hybrid cold war will depend on further developments and successful implementation of certain conflict scenarios.[i] Currently, Central and Eastern Europe is in the center of the ongoing conflict between the Russian Federation and NATO[ii] despite that neither of them want to admit it.[iii] To understand the position and the role of CEE in the conflict with Moscow, it is necessary to analyze and consider various scenarios regarding the future relations between Russia and the West. In the near future, there are three scenarios that can be identified:

The confrontation between the West and Russia seems the most likely scenario. Russia’s actions have undermined mutual trust and possible cooperation with the West. For example, Kremlin’s approach towards the Partnership for Peace program; its stance in the 2008 Russo-Georgian war regarding a ceasefire; Russia’s policy towards implementation of the Minsk Protocol[iv] and an increased activity in the field of information and cyberwarfare intended to affect elections and internal affairs in the West (e.g. Sergei Skripal’s case etc.). Furthermore, it is worth mentioning Russia’s violation of the Treaty on Conventional Armed Forces in Europe (CFE) or the Intermediate-Range Nuclear Forces Treaty (INF Treaty).[v] Given the aforementioned reasons, it is clear that Russia is no longer interested in building mutual trust and cooperation with the West or has no will to change the current state of affairs.[vi]

Therefore, the current cold war will last as long as Kremlin decides to change its political direction. Otherwise, Russia’s relations with the West will never improve. Unfortunately, the public trust in President V. Putin has decreased recently. In the past, Russian administration used external conflicts to improve president’s approval ratings. It is worth noting that President Putin’s support reached the highest level after the Russo-Georgian war and the annexation of Crimea (Figure 1.). Probably, Kremlin can escalate another external conflict as a political tool to affect Russia’s internal affairs. 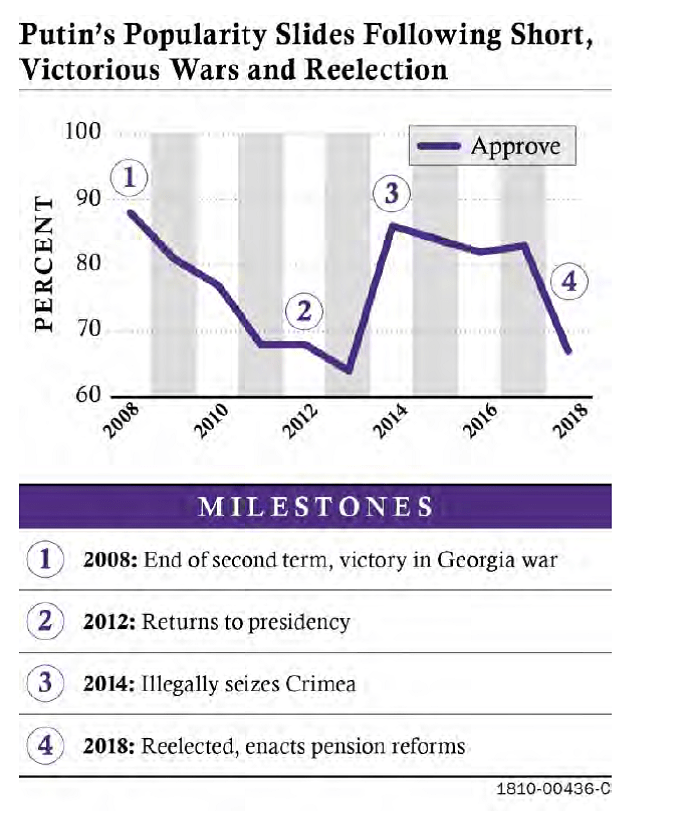 Figure 1. Correlation between Putin’s popularity and escalation of external conflicts. Based on  WORLDWIDE THREAT ASSESSMENT of the US INTELLIGENCE COMMUNITY, Office of the Director of National Intelligence, January 29, 2019, https://www.dni.gov/files/ODNI/documents/2019-ATA-SFR—SSCI.pdf

On the other hand, the characteristics of the new cold war will depend on stance of the West. There are two possible scenarios in this case: 1) stabilization, or 2) destabilization. The only way to stabilize and balance Moscow’s policies is to establish efficient tools of suppression, deterrence and neutralization of Kremlin’s political actions as well as measures of defence against new forms of Russian aggression. The aforementioned factors are indispensable in creating a balanced system between the Russian Federation and the West. Given the first cold war, it is highly unlikely that such a conflict could turn into a war despite that the risk of hybrid conflicts is much higher than in the 20th century. However, a lack of adequate and clear mechanisms to balance Russia’s power could potentially lead to permanent destabilisation in West-Russia relations. The risk of military escalation will increase significantly and lead to the ‘black’ scenario.

According to the second scenario, the new cold war confrontation would end and turn into ‘peaceful and cold coexistence’ based on common sense. The chance of this scenario to succeed seems much lower compared to the first one; nevertheless, there is a chance that such a state of affairs will change in the long run. The success of the second scenario depends on Russia’s stance. The current Russian approach to the relations with the West will not change as long as V. Putin remains in office. Another politician holding the position of Russia’s president could correct Kremlin’s policies or even modify them significantly.[vii] Russia is rather unable to stand a long-term economic confrontation with the West. Its economy is too weak and, therefore, a prolonging conflict could end up like the first cold war that led to the economic collapse of the Soviet Union. Especially, given that the Russian economy does not depend so much on its internal politics but rather on external factors such as gas and oil prices (Figure 2.). 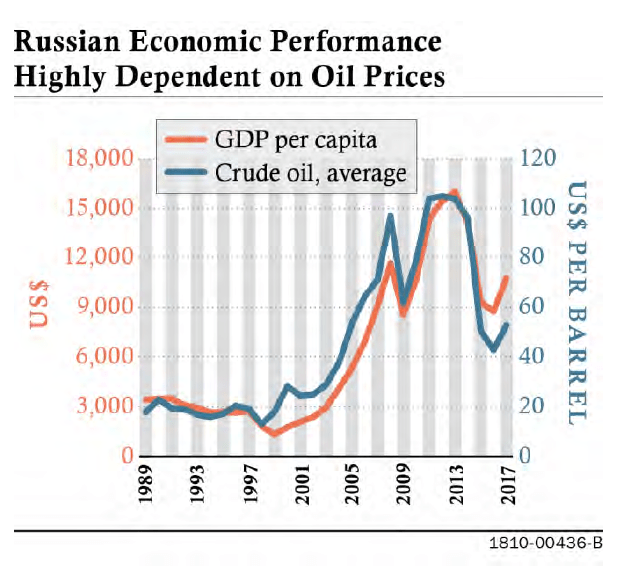 Figure  2. Russian dependence on crude oil prices. Based on WORLDWIDE THREAT ASSESSMENT of the US INTELLIGENCE COMMUNITY, Office of the Director of National Intelligence, January 29, 2019, https://www.dni.gov/files/ODNI/documents/2019-ATA-SFR—SSCI.pdf

Having understood the consequences of the economic confrontation with the West, the ruling Russian elite could repeat the political manoeuvre that shifted power from Boris Yeltsin to Vladimir Putin in the late 1990s. New president could have freedom to change Kremlin’s political direction and initiate deeper cooperation with the West. Such a shift of power could be also caused be revolutionary movements; the nation afraid of economic and political disaster. Thus, the theoretical cooperation between the Russian Federation and the West could be either voluntary or enforced by political circles. The political shift in Russia is more likely to happen by the end of the next decade.

The least desired scenario involves either a limited or a full-scale military conflict. Given the current, hybrid warfare conditions, a direct military conflict between the two sides is more likely than in the second half of the 20th century. Particularly in the context of covert and indirect hybrid warfare that could be seen in Crimea and to certain point in Donbas, East Ukraine.[viii]

An open but limited military confrontation is less likely (but still more likely than during the first cold war). The risk of such a confrontation is based on Russia’s nuclear de-escalation strategy which is intended to put an end to a conventional conflict by using tactical nuclear warheads. A lack of NATO’s response to such a doctrine could increase the risk of a limited war. Therefore, a rapid limited military operation conducted by the Russian Armed Forces could be used for certain political gains presented to NATO as a fait accompli.

A full-scale war between the West and the Russian Federation is the least likely to happen given the nuclear capabilities of the both sides and the mutual assured destruction (MAD) doctrine. Such a war could be only caused by some unpredicted accident or a lack of control over the limited military conflict which suggests that hybrid warfare can increase the probability of a large military conflict compared to the first cold war in the 20th century.

The role of Central and Eastern Europe

Based on the aforementioned analysis of the security environment in the Euro-Atlantic area, there are three major scenarios related to the future role of CEE in the new cold war. Future developments will depend on whether Russia will seek confrontation with the West or a compromise that could warm up the current relations and ease tensions between the two sides of the conflict.[ix]

Growing tension between the West and the Russian Federation would mean that Central and Eastern Europe will serve as a strategic shield of the West against Russian aggression. In this context, it is particularly important to emphasise the position of the Baltic States: Lithuania, Latvia and Estonia. NATO’s deterrence is the key to reduce and neutralise Russia’s pressures and threats towards the Baltic States including ‘non-territorial’ aggression below the threshold of an open military conflict but also as far as a limited territorial aggression is concerned, for example, annexation of their territories or a threat of Russia’s implementation of nuclear de-escalation strategy against those states.

The West should also emphasise the threat of a potential powerful military retaliation against the Kaliningrad Region and uphold the Suwalki Gap which links the Baltic States and other NATO member states through Poland.[x] These two abovementioned factors are an important tool of deterrence against Moscow particularly in the context of a potential Russian aggression against the Baltic States, and consequently, a key determinant of strategic stability in Europe. Therefore, it is necessary to strengthen the entire region by building NATO’s defence infrastructure and extend presence of the allied forces. Consequently, this scenario will lead to deeper militarisation of the entire CEE region.

Another option, which would be detrimental to CEE, is turning the region into a political-strategic ‘bumper’ between the West and the Russian Federation. In this scenario, Central and Eastern Europe would be infiltrated by both Russian and Western interests. A collapse of NATO and the European Union would be a necessary condition making such a scenario possible. The collapse of NATO could be caused by withdrawal of the U.S. forces from Europe. In case of the EU, the fall of the organisation could be provoked by the ‘multi-speed’ EU and its internal division. Consequently, the Central and Eastern European countries could end up in a ‘security grey zone’ and thus remain under heavy Russian influence. Nevertheless, a simultaneous collapse of both organisations is very unlikely and, therefore, the ‘black scenario’ for CEE is very unlikely as well.

The third option is sacrificing the interests of CEE by Western allies and looking for a compromise and détente with the Russian Federation, which is necessary to realise other important ambitions in the Middle East or Asia.[xi] Such an agreement could be perceived as another, softer version of Yalta Conference regarding the division of influence in Europe.[xii] This scenario could lead to demilitarisation of NATO’s Eastern flank by the United States and Western Europe. Such an agreement with Russia would mean that NATO member states accept the existence of the ‘second-class’ NATO member states or ‘peripheries’ of the European Union which remain under certain influence of Russia.

1. Undoubtedly, there is no much prospect that tensions between the West and the Russian Federation will ease for years to come. There is no willingness to solve this issue on both sides. Stabilisation of the new cold war will demand a common, conceptual response of NATO and the European Union[xii] to the conditions imposed by the Russian Federation.

2. A lack of Western response would strengthen Russia’s belief in its risky policies and actions that can permanently destabilize relations between the two sides particularly in Central and Eastern Europe. Nevertheless, both scenarios (including destabilisation and stabilisation) seem equally feasible.[xiii]

3. In all scenarios, the CEE region is very vulnerable to tensions between the West and Russia. The entire region can be either an important factor determining Western defensive approach to Russia but also can be a victim of the most disastrous scenario, which is the fall of Euro-Atlantic structures.

[ii]  Ch. Samuel, A. Demus, J. Shapiro, Getting Out from „In-Between”: Perspectives on the Regional Order in Post-Soviet Europe and Eurasia, RAND Corporation, Santa Monica 2018; https://www.rand.org/content/dam/rand/pubs/conf_proceedings/CF300/CF382/RAND_CF382.pdf