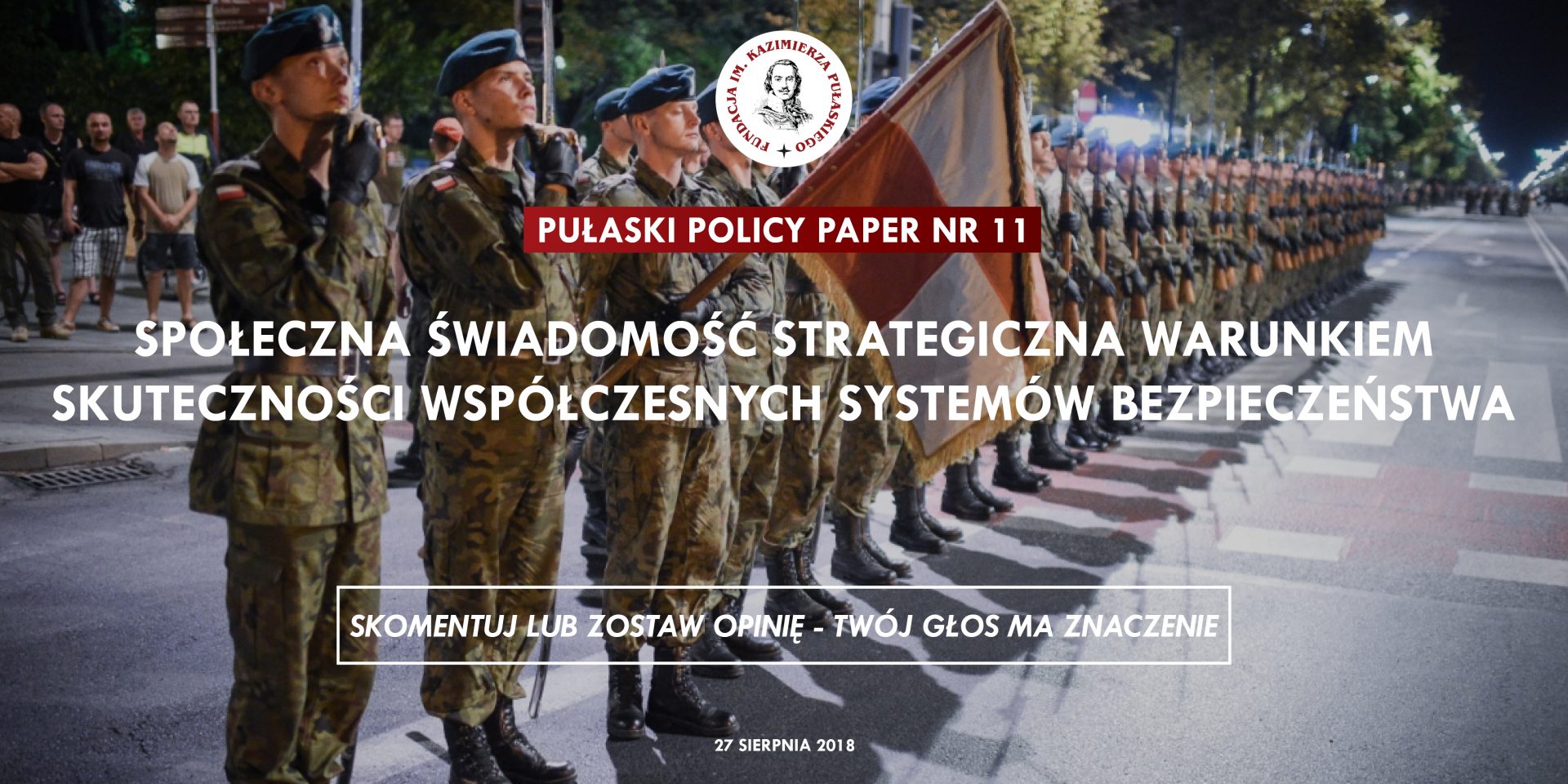 National security, defined as a process of minimising the risks and threats to survival and development of a nation and the state in an uncertain and dangerous environment, becomes increasingly more complex. National security goes beyond military security and is no longer limited to state institutions. The state, its armed forces and “uniform” services no longer hold a monopoly over security. One reason for this is that non-military risks (i.e. disinformation) become ever-more dangerous for the state, various social groups, non-governmental entities and lives of individual citizens. National security cannot be entrusted solely to public administration bodies or specialised operational entities within the national security system (armed forces, police, intelligence, counter-intelligence, other services and protection agencies, etc.), nor just to security experts in various social groups and businesses. Knowledge concerning national security must be commonplace in the society, while individual, group and institutional capabilities outside of operational entities should be continuously perfected.

Features of a modern security environment

The conditions described above stem from the nature of a modern security environment, which affects the means used to achieve it. Generally, on a global level, security environment is determined by at least two large-scale trends of modern civilisation: globalisation and informational revolution. The third trend, visible on a regional level (Euro-Atlantic region), is the political evolution of international order from cold-war to post-cold-war and neo-cold-war.

Globalisation has both positive and negative impacts for security. It creates conditions to overcome certain threats, but also enables other – hitherto local – threats to spread around the world, as well as creating new threats. Globalisation alters the security environment, but does not eliminate threats – disputes, conflicts and crises. It changes the nature of these phenomena.

Another important result of globalisation is a shift of the security’s centre of gravity – from collective security (states and nations) to individual security (persons). Globalisation closes the circle of security evolution. The borders are becoming less important, while the security of an individual bears more significance in relation to global threats.

This phenomenon was first noticed in 1990s, when the concept of security was increasingly defined in the context of human rights. Violations formed a ground for international interventions and interference in internal affairs of states, thus ignoring official borders.[i] A common approach is to formalise this approach by formulating and presenting individual security as a doctrine, and a foundation for a dialogue on modern security in general[ii].

Over the past few decades, the significance of information for security has skyrocketed. Its expansion is visible particularly through information systems. The natural information factor, commonly known and analysed strategically since the times of Sun-Tzu, is now magnified by information technology. Information becomes more technical. This process created the cyberspace. In other words, we live in the informational revolution era, which provides a new dimension of security. Informational security environment requires new strategies and instruments, information-based combat and support security systems

Informational activities may take different forms and be implemented in various security situations – during a regular or subliminal war as well as during peacetime.  Therefore, informational security of a state requires mechanisms to counter all forms of threats, including propaganda, psychological operations, internet wars, strategic communication or social communication created by the enemy. It is also important to build and voice a counter-narrative.

The third important factor, which affects the security environment in the Euro-Atlantic area nowadays is a political and strategical evolution – from cold-war to post-cold-war and the “new cold-war.” During the cold war, the security environment was clear and easy to predict. The world was dominated by conflicts between two blocks – communism and liberal democracy. These quarrels affected all spheres of lives for individuals and nations (ideologies, politics, economies, militaries, cultures, etc.). They could easily escalate into a large-scale military conflict, including a global nuclear war. This was virtually the only, substantial threat, which conditioned the security environment back then.

The distinguishing feature of the post-cold-war period was a transition from confrontation to cooperation. The West, including NATO as shown in the 1990 Rome concept, offered Russia and other Eastern Bloc states a role in building a cooperative security environment in the Euro-Atlantic area. Initially Russia, led by B. Yelchin, was cautiously open to the idea. This situation changed after W. Putin took power. The first practical evidence of a change of course was an armed intervention in Georgia in 2008, while illegal annexation of Crimea and hybrid intervention in Eastern Ukraine showed the new concept in full swing. These events marked an end of the post-cold-war area, and the beginning of a new cold war between Russia and the West.

The new cold war is naturally different than the one we experienced in the XX century. It may be described as a “hybrid cold war.” The are many differences between the two, but the essence is the same: a political confrontation with indirect, potential references to military solutions, including nuclear weapons. Today we see Russia exerting pressure on NATO states, particularly those which she shares borders with, but also those in the West and South of Europe, which are susceptible to Kremlin’s „arguments”. This pressure is the reason behind a crisis in Russia-West (particularly NATO and USA) relations.

The political and military pressure may turn into a hidden, subliminal aggression, that is a covert, limited military action. A full-scale, open war is not an option for Russia, since military balance clearly speaks to NATO’s advantage. Nonetheless military action below the threshold of war may be a tempting alternative. Such tactics may be used to internally weaken the opponent, disorganise the functioning of a state, cause internal political turmoil and a policy shift favouring Russia. Kremlin would have to avoid provoking a collective response from NATO and/or EU, while trying to undermine the credibility of armed forces of states bordering Russia.

The risk of an open, but limited aggression will be the prevailing topic in the new, hybrid cold war. Russia would decide to pursue this course only under specific political and strategic conditions. While a subliminal aggression would aim to weaken the opponent, gain political influence and undermine NATO’s credibility, an open an intentionally limited conflict would be used for more grave reasons. The third risk of war in the hybrid cold war, that is a full-scale, unlimited war, has most devastating consequences but is also the least likely (just like during the classic cold war).

The features of the modern security environment – globalised, underpinned by information and dominated by hybrid threats – presented above affect the ways in which security actors may operate on all levels: international, national/state and individual/citizen. Effective functioning in this environment requires adequate operational assets and implementation of international and national security systems. A “strategic resilience” of states and societies, adapted to new threats, is one of the important and widely discussed tasks in this regard. It is noteworthy that all the threats to the Euro-Atlantic security environment during the neo-cold-war era have a common denominator: intimidating, blackmailing and influencing opponent’s social opinion in order to achieve political goals. Therefore, a strategic resilience must be underpinned by an effective “blackmailing resilience.”

The question is how to build this kind of resilience. The answer seems straightforward – it is the understanding of the threats and the ways to rationally address them. If the members of a society know the methods in which terrorists operate and the logic of neo-cold-war confrontation, they will not fear these risks as much. Also, their actions will be more rational, less risky and more effective. The society as a whole will thus be more resilient to modern threats. Therefore, it is fundamental to educate the society on the security architecture and shape the strategic awareness of the society.

In order to effectively operate in the modern security environment, governments must popularise and socialise the knowledge concerning threats. The society, including its individual members, are no longer the objects of security policy, but are increasingly becoming the subject in this environment. This is particularly true for democratic societies, where citizens and social organisation play their role in managing security mainly through the control of elected officials.

This control goes beyond going to the poll booths, and into the everyday life – participating in debates, media discussions and – increasingly – through social media. All this is reflected in public opinion polls, ad hoc questionnaires and systemic voting.

Engagement of the public and social mobilisation for security implicates both opportunities and risks to security. On the up side, the society which controls a government enables correction of security policy course, if it veers off track.  These corrections may be necessary for a number of reasons, including: a lack of professionalism in elected authorities tasked with forming security policy, false doctrinal presumptions, executional weaknesses, etc. Therefore, a public debate on this topic might be a chance for the government to rethink its policies and correct the course – even if the change is covert in order to avoid admitting to a mistake. The more the society is prepared and the more substantive the public debate, the greater the chances that state-wide security policies will be adequate. This is particularly relevant when making difficult, strategic decisions, which bear long-term consequences and require financial resources to be pulled from other social programs. This is only possible for a society with a well-founded, strategic awareness.

It is important to point out here a major threat associated with familiarising the societies with security challenges, that is the risk of populism. This problem is most common in societies with low strategic awareness level. Usually the so-called “public opinion” is voiced through polls and reflects only a running take of all outstanding issues, with a short-term perspective and a very personal context – applicable only to the interest of a given individual and his/her immediate surroundings. There is no strategic perspective to the polls, and no larger take on general, society and country wide problems. If the governing elite is focused on holding on to power, and not on long-term national interest, it risks falling to populism and making popular decisions which do not match the actual security needs. This leads the policy to become “a-strategic” and is particularly dangerous in security matters, where most fundamental decisions are long-term in nature, with costs payable immediately, but the results due in the distant future. If two factors happen to coincide: a low level of strategic awareness of citizens, and a populist bend among the ruling elites, the risk of trivialising the security discussion increases. This tendency, which has a direct impact on the national interest, is prevalent in Poland.

Therefore, Poland faces the need to popularise knowledge concerning security matters, broadly educate the society and build a strategic awareness among Poles. An important role must be played by the public education system, a focused approach by competent public administration bodies and – foremost – by non-governmental organiz\sations. This way, the society will be able to provide effective support to the government in making rational, strategic choices on security policy, or event exert pressure in favour of making these decisions. This is the key aspect in increasing the effectiveness of modern national and international security systems.