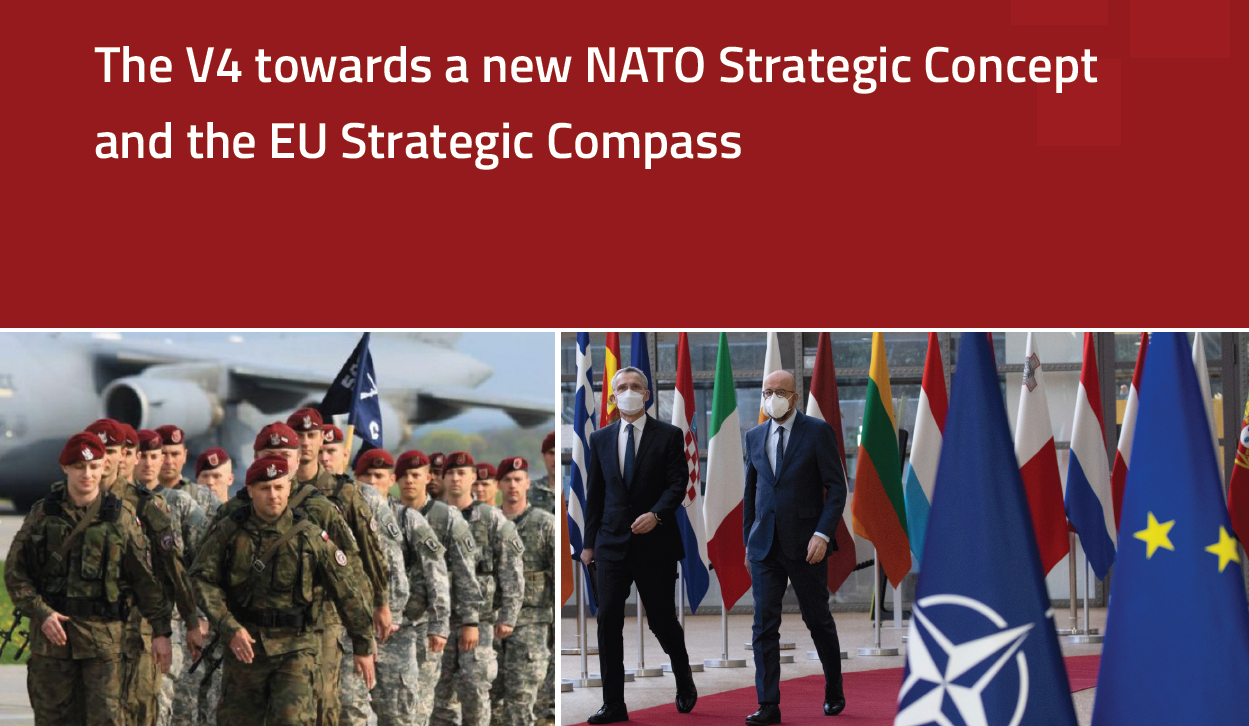 We, the representatives of the Casimir Pulaski Foundation, the Antall József Knowledge Centre, EUROPEUM Institute for European Policy and  the Slovak Security Policy Institute; have the privilege of presenting to you a special report, wtitten by sixteen   senior defence experts and entitled “The V4 towards a new NATO Strategic Concept and the EU Strategic Compass”. The document is a summaryof  a broader project entitled: “Returning to the roots of the Visegrad cooperation – coordinating V4 strategy towards NATO Strategic Concept and European defence autonomy” that is supported by the International Visegrad Fund.

The project is aimed at supporting the coordination of the V4 group’s stance on works over a new NATO Strategic Concept (recommended by the “NATO 2030: United for a New Era” report by NATO Secretary General) as well as on the idea of the EU strategic autonomy (proposed by some European leaders as a core concept of EU Strategic Compass). As the V4 group was established in order to coordinate the policies of four CEE states towards NATO and the EU, we believe that this is the right format to discuss their future.

As the NATO 2030 report indicated: “NATO must adapt to meet the needs of a more demanding strategic environment marked by the return of systemic rivalry, persistently aggressive Russia, the rise of China, and elevated transnational threats” and “the starting point must be to update the 2010 Strategic Concept”. It is hard to disagree with this assessment, however, some of the report’s recommendations, being a starting point for the new Strategic Concept, may be considered as more ambiguous, especially from the perspective  of NATO Eastern Flank states, including the Visegrad Group. Points such as the dual-track approach to Russia, the devotion of more political resources to the security challenges posed by China, integration of the fight against terrorism into NATO core tasks, or limitation of veto power in the Alliance decision-making process at first glance sound reasonable, but as always, the devil is in the details. To exemplify, a greater focus on China can result in the weakening of NATO’s core tasks nd the weakening of the ability to defend all Members against various military threats. It can also reinvigorate the vision of NATO as a “toolbox” for operations against challenges emerging “Out Of Area”, as indicated in the Treaty. While unanimity prolongs the decision-making processes, it also ensures that the decisions, once taken, are indeed implemented. In turn, the concept of EU strategic autonomy, although reasonable, if implemented without necessary care, can and will weaken the trust between the EU and the US. All of these issues are of vital importance for the V4 countries, as their security is based on both NATO and the EU.

The report was coined during as many as four discussions, that altogether included around 200 participants from all V4 states (The Czech Republic, Hungary, Poland and Slovakia), gathering diplomats, state officials, military officers as well as representatives of V4 think-tank community, academia and young leaders. The 16 senior defence experts (fmr. ministers, ambassadors, generals, think-tank representatives) that contributed most to the below report, worked in four separate working groups thatconsisted of one expert from each V4 state, in order to assure common stance is found with regards to on each and every of the discussed matters.

We hope that our report will be taken into consideration during the process of drafting both the  new NATO Strategic Concept and UE Strategic Compact. It is of upmost importance, that these documents are created as a result of wide consultations both within the respective Member States as well as with senior experts from across Europe.

With the highest respect,