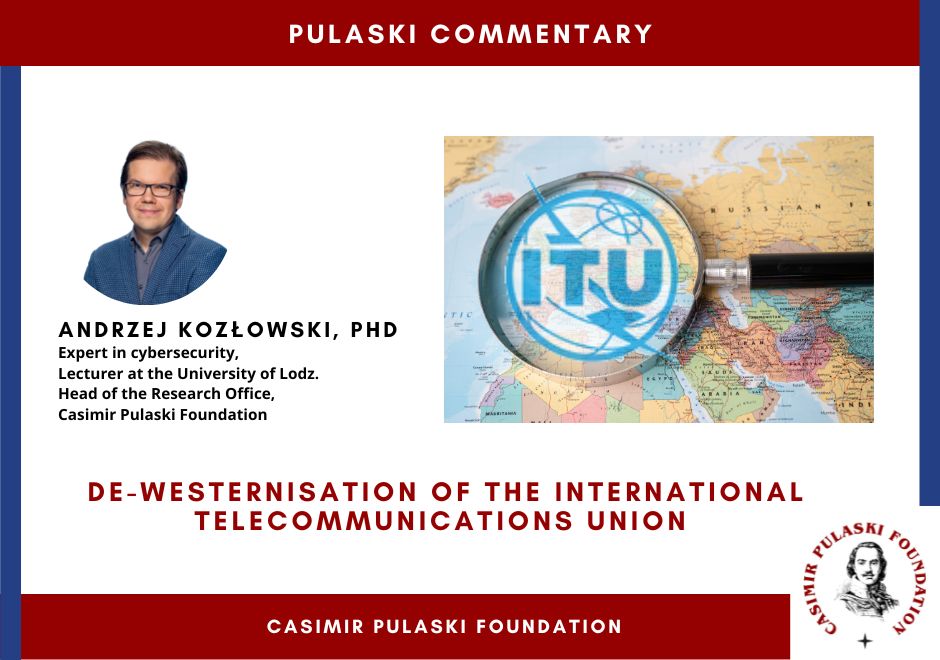 The International Telecommunication Union (ITU) is again a place of clash over the vision of the Internet as the elections to choose the next head of the organisation are approaching. After 8 years of Chinese leadership, the one of the frontrunner in the elections is a Russian candidate. Does the ITU become a centre of promoting non-western vision of the Internet and therefore will contribute to limit the free flow of information worldwide?

What are we fighting  for?

International Telecommunication Union is the specialised agency of the United Nations, which is responsible for information and communication technologies area. It was established originally in 1865 as the International Telegraph Union. The ITU coordinates worldwide technical standards and works to improve telecommunication infrastructure in the developing countries. It may seem that work of ITU is not very relevant to the ordinary Internet user but it is a wrong approach. The work of ITU affects daily life of Internet users by recommending standards and practices for communication and digital technologies from cellular phones to satellite orbits. It is important especially in developing standards in the case of technologies such as 5G or 6G and artificial intelligence.  Despite the fact that the standards are not binding , in reality they have a great sway over the standards adopted around the world.

In ITU the two general visions of the Internet have clashed. First one supported generally by the Western countries favours the current model of the Internet dominated by private enterprises and civil society groups with the small involvement of government, when on the opposite side there is a model promoted by China, Russia and a bunch of non-Western countries. This model is based on the idea of internet sovereignty, which in practice means the bigger control of governments over Internet users and widespread censorship.

Since 2014 Houlin Zhao has been a Secretary-General for two terms. The 8 years of Chinese leadership brought up undermining multistakeholder governance  system of the Internet based on entities such as International Corporation for Assigned Names and Numbers (ICANN) and promoted the expansion of the ITU’s mandate to set Internet standards. He additionally deepened and institutionalised ties between the organisation and China, endorsed the Chinese Belt and Road Initiative and increased Chinese employment in the organisation. China also sends the largest delegations to ITU study groups and proposed many specifications and initiatives in order to make Chinese standards a global ones.

US vs Russia or it is time for a candidate from Europe?

There are two main candidates in the race for leading ITU, the Doreen Bogdan-Martin from the United States and Russian Rashid Ismailov. Considering the ongoing brutal Russian invasion on Ukraine, one may think that there is no chance for Russian candidate to win, but the race is close and both of them may win. One needs to remember that many countries in Africa, Asia and South America shared the Russian narrative regarding the war in Ukraine.

Russian candidate Rashid Ismailov in the past worked for Nokia, Ericsson in Russia to become a Vice-President for Service, Procurement and Deliveries in Huawei Technologies, covering Russia, Ukraine, Belarus and Armenia. Later, from 2014 to 2018, he became a Deputy Minister at the Ministry of Digital Development, Communications, and Mass Media. It was time of introducing the new tools and measures of censorship in Russia. Since 2020 he has been a president of Russia’s third largest mobile operator Vimpelcom. Although the main brochure of his programme is entitled a humanisation of ICTs, after the war in Ukraine no-one should trust Russian words and promises, especially from the man who actively participated in cracking down freedom of the Internet in Russia.

His rival will be a Director of the ITU’s Development Bureau American Doreen Bogdan-Martin, who may be the first woman ever to hold a top level ITU post. She has had almost 30 years of experience working on global connectivity during which she promoted collaboration, inclusivity and partnership in ICUT world. She has much bigger international experience than her Russian opponent.

China will probably do everything to support Ismaiov’s candidacy – by, for example, bribing other states with lucrative jobs – as both countries signed a joint statement in February 2022 declaring that “any attempts to limit their sovereign right to regulate national segments of the Internet and ensure their security are unacceptable.” In this declaration both countries also called for a greater participation of the ITU in addressing these issues.

Despite the Russian brutal invasion on Ukraine, Russian officials have still  chances to get an international position. The Russian candidate is a favourite to take a seat in UN’s Economic and Social Council and also has chances for ITU. To be elected, each candidate must secure a necessary majority. In accordance with the ITU Rules of Procedure, the required majority consists of more than half the delegations present and eligible to vote.

The fight over ITU is also a fight for the  Internet future. The naive and very optimistic belief that the Internet and technology will join people and countries is currently outdated and the fragmented Internet is actually a fact. Both the United States and the EU should forget for a while  about the difference in their policy on data protections and regulations on American companies and focus on taking ITU back for Western world. It seems that it is happening as a head of EU diplomacy Joseph Borrel officially on Twitter supported a candidacy of Doreen Bogdan.  However, some African, Asian and South American countries may support a Russian candidate not because they like him but to oppose American one, which may remind them about American hegemony and colonialism. They may also be tempted by possible Chinese investments and therefore the West needs to react and fight for votes. There is also a task for Polish Minister of Foreign Affairs to engage in this discussion and seek support for non-Russian candidate among various countries. The cyber dimension is a next important element of foreign and security policy and should be taken seriously. If the Russian candidate wins, there will be a continuation of a Chinese approach – as China and Russia strengthen cooperation after the war in Ukraine – and further de-westernisation of ITU. In case of that the authoritarian regimes also will get a more effective control over the flow of information and breaking censorship will be even more difficult.

Author: Andrzej Kozłowski, Head of the Research Office at the Casimir Pulaski Foundation

PULASKI REPORT: Establishment of the Tribunal on the Aggression of Russia Against Ukraine: Supreme Level of Responsibility to Prevent New Conflicts in Europe