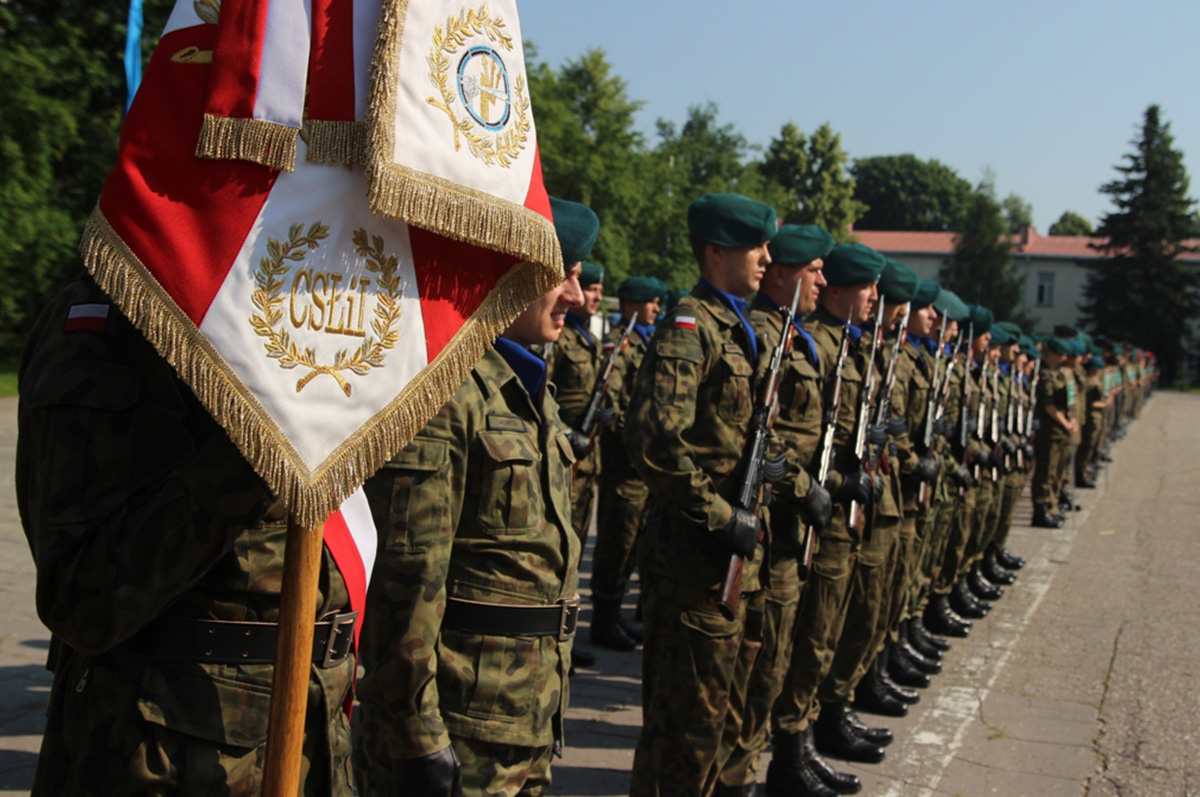 The year 2013 marked the beginning of the largest modernization program in the history of the Polish Armed Forces. Over the following 10 years, a massive overhaul of equipment and armament acquisition programmes was to be completed, allowing for qualitative and quantitative improvement in the Armed Forces capabilities. The assumptions behind the program and its scope were nothing short of impressive. Their success however, would only be possible if all factors, stakeholders and institutions involved in shaping the defence capabilities worked together in unison, regardless of the political faction they represented. Among a number of key programs are also those focused on improving the combat capabilities of the Land Forces (Wojska Lądowe – WL).

The capabilities of the Land Forces have deteriorated over time in virtually all aspects, particularly in the areas where the Soviet era equipment was fielded, which often times was over 30 years old, with no potential for further modification or modernisation and inevitably nearing the end of its service life.

The challenge facing the Land Forces in their current state is maximising their potential, thus increasing their operational capabilities. The number of divisions left in the aftermath of their restructuring, inevitably implicates that their previous functions must be taken over by brigades and the capabilities of the latter, analogously, should now be fulfilled by battalions. In this context, the only viable way to strengthen the potential of the Armed Forces is to improve its capabilities at the battalion level, which should be capable of participating in operations typical for conventional and asymmetric warfare, as a standalone unit.

Even at the present time, mechanised battalions, equipped with KTO Rosomak wheeled armoured personnel carrier (APC), as well as tank battalions are a significant force in their own right. The relative increase in their combat potential was achieved by increasing the number of companies from three to four. Unfortunately, this has not been complemented by a matching enhancement of the combat support units – this becomes particularly acute, when the demands of the modern battlespace are taken into account. Consequently, it can be assumed that the potential of support subunits is  insufficient, especially in relation to the size of the area of responsibility.

There can be little doubt, that gaps and distances between areas of responsibility of individual companies are going to increase. There is therefore a need for a new perspective on the fire manoeuvring capabilities, as far as range and direction is concerned, as well as on special properties subunits on directions that are not secured by regular units. One cannot avoid a critical review of mechanised and motorised battalion structures if this context is to be taken into account.

Battalions fielding wheeled APC’s are normally referred to as motorised, while those equipped with Infantry Fighting Vehicles (IFV’s) are defined as mechanised.  They are also referred to as light and heavy respectively – even though the KTO Rosomak APC is heavier than the IFV by nearly 10 metric tonnes (the distinction in this case refers to designating the wheeled drive train as light, and tracked drive train as heavy – at the same time it is assumed, that wheeled drive train is more universal, even though new technologies used in tracked vehicles make them comparable with their wheeled counterparts).

The present day force structure of motorised and mechanised companies, with each one consisting of three platoons, and each platoon consisting of four teams, or squads in US terminology, (including one support team), is larger and equipped in better weapon’s systems than their 70’s counterparts. On average, battalions have nearly doubled their combat capabilities, by increasing the number of companies to four, and adding an additional team to each platoon (giving a total of an extra company and 12 teams/squads).

Effectively, this means that an equivalent of two companies has been added, which in theory should  allow the battalion to increase its area of operations. It is important to remember however, that the size of those areas, expressed in tactical standards, is dependent on both operational requirements and structural capabilities of battalions themselves.

At the present time, however, battalion composition does not provide a number of capabilities. Those include the following:

Mechanised and motorised companies should possess the ability to operate independently within the battalion defence zone, and be able to engage the enemy throughout the entire depth of the adversary’s battalion combat group. This implies engaging targets located at a depth of 3-5 kilometres and further, an increase from the current 1-2 kilometres.

This in turn dictates the need to provide field of fire at a distance of at least 7-8 kilometres. The question then arises, whether at the battalion defence zone of 5 and more kilometres all the subunits could receive sufficient fire support from a standard company supported by two M120 platoons. Up until now, the support force was composed of six M120 mortars, and that was a sufficient amount of force according to the 70’s doctrine, and enough to provide fire support for three companies.

Currently, it is doubtful whether the support company in the existing structure and equipment is sufficient for the demands of the present day battlespace. This issue should be solved by creating conditions for fire support throughout the battalions whole defence zone, reaching the entire depth of the enemy advancing group – that is, to a field of fire depth of at least 10 kilometres.

Experiences drawn from the recent conventional conflicts (e.g. Russian-Georgian War of 2008) strongly indicate the need for a comprehensive fire support capabilities for sub-units that would be available on separate, independent directions, with each of those directions given the same priority.

The experience from Iraq and Afghanistan has also shown the growing need for the ability to commence independent action at the level of platoon and company. Therefore, the complex combat autonomy has become a necessity. First and foremost this can be achieved by saturating battalion level forces with numerous indirect and direct fire ordnance, and UAS’ capable of conducting of reconnaissance and target acquisition missions.

A mechanized, or motorized battalion composed of four companies should be able to effectively defend the area of anywhere between 5 and 10 kilometres, depending on the terrain characteristics of the hypothetical battlefield.

Consequently, in order to ensure effective operation on all approaches, motorised battalions ought to include a combat support company composed of four platoons fielding three to four M120 mortars each. Depending on a specific scenario, the width of the defended area, either an entire support company can be used (seldom),  or only its part of forces (e.g. without two platoons – more often) or simply by assigning fire platoons to the motorized company (most frequently).

Charts 1,2,3 and 4 present the battalion battle group variants including utilizing companies in their new structure. 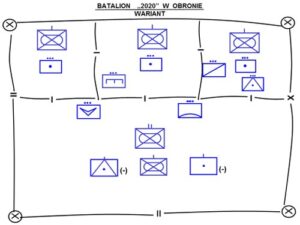 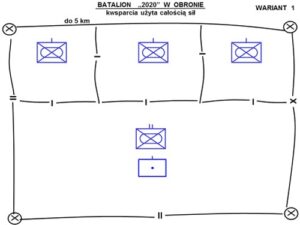 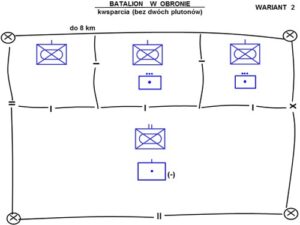 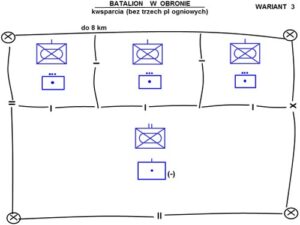 What should be changed? 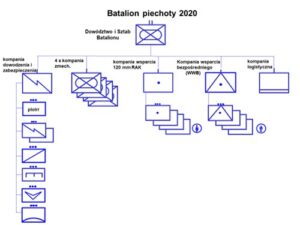 Modernization plan and the proposed alterations.

The 2013-2022 Army Modernization Plan assumes acquisition of 120 mm self-propelled mortars for the Land Forces, with eight such vehicles per combat support unit. This number however is a result of applying an outdated doctrine developed in the 1970’s. As the analysis above has shown, the core assumptions behind the Plan should be updated, both as far as the battalion organisation is concerned, and the equipment it will field, with the primary goal being the increase of their combat capability.

As the recent conflicts in Eastern Ukraine and Crimea have proven, the assumptions behind the original Army Modernization Plan are inadequate, and need to be updated. A number of Land Forces procurement and organizational plans need to be accelerated (this applies in particular to the reorganization of battalions, and acquisition of next generation equipment). Consequently, the proposed changes should significantly increase the battalion combat capability, and most importantly transform them into standalone tactical-level units.

Those changes would also allow brigades to nearly double their strength, and consequently, for a two-fold increase in their area of responsibility.

1. The number of divisions remaining in the aftermath of the restructuring, inevitably dictates the need for the brigades to assume some of their responsibilities, and consequently for the battalions to assume the responsibilities previously ascribed to brigades. In this context, the only viable way of increasing the Land Forces potential is to strengthen the battalion level units, which would be able to effectively conduct operations typical of conventional and asymmetric conflicts, acting as a separate, stand-alone unit.

2. The increase in combat capability at a battalion level will allow for conducting multi-faceted, complex operations. Furthermore, boosting anti-armour and anti-air capabilities would allow for flexible and highly manoeuvrable operations, which are the essence of the modern battlespace. Multiplying the size and combat capability of battalions will transform those units into a modern, autonomous part of a larger military organizational structure.

Author: Lt. Gen. Wlademar Skrzypczak, Senior Fellow of the Security and Defence Program at the  Casimir Pulaski Foundation, Undersecretary of the State at the Defence Ministry of the Republic of Poland (2012 – 2013).

ANALYSIS: Macedonia With a New Government - The End of the Crisis

ANALYSIS: The conditions of stabilizing Iraq after defeating the so-called ‘Islamic State’