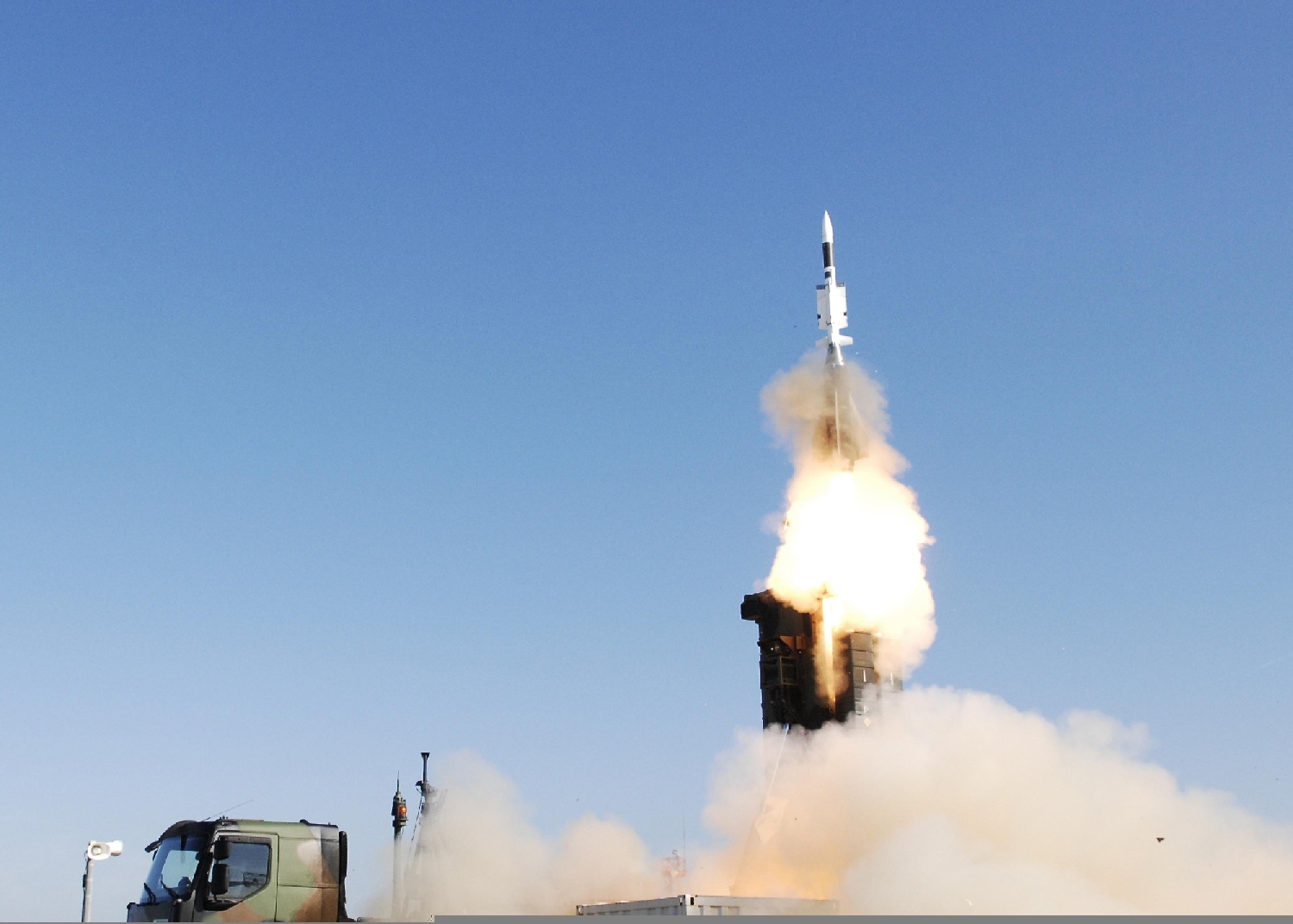 France has had no need to possess a typical ballistic missile defence system thus far. The country is not threatened with a ballistic missile strike, in contrast to states like the United States or Israel. However, it does not mean that France does not require specific capabilities against these threats. The French response is the SAMP/T (Sol-Air Moyenne Portée Terrestre or Surface-to-Air Missile Platform/Terrain), the medium range air defence system that is able to intercept ballistic missiles.

The Aster missile family consists of the following constructions: the short-range missile Aster-15 (an operational range over 30 km), and the Aster-30 missile with the operational range of over 100 km. These missiles have been developed by the Italian-French consortium Eurosam, its main shareholders are Thales as well as national structures of the MBDA company from both states. The development phase of this project started in the late 1980s and 1990s. Its main goal was to develop both land and maritime systems that would be based on the Aster missile family. Consequently, the consortium has developed two maritime systems: SAAM (Surface-to-Air-Anti-Missile) and PAAMS (Principal Anti-Air Missile System) systems. The SAAM system has been integrated only with the Aster-15 missiles and it constitutes the armament of ‘Charles de Gaulle’ and ‘Conte di Cavour’ aircraft carriers. On the other hand, the PAAMS has been integrated with Aster-15 as well as Aster-30 missiles and installed in the Type 45 destroyers of the Royal Navy as well Italian-French Horizon/Orizzonte-class frigates and FREMM (Frégates européennes multi-missions) vessels, including the exported units. Therefore, it seems important to emphasise that French Navy is able to provide air and limited missile defence for its units operating in the littoral zone of another country.

Nevertheless, the development phase of the land version of the system has lasted much longer. The SAAM system was installed at the deck of ‘Charles de Gaulle’ in 2001, whereas the first French battery of the SAMP/T system, which is also referred to as ‘Mamba’, has become operational in October 2011, a year after introduction to the army.. Furthermore, it is worth noting the fact that it took 21 years to make the system operational since the beginning of the programme.

According to the initial plans the air force as well as land forces were expected to become users of the system. Each of these two branches of the French Armed Forces should receive 6 batteries of the system, however in 2012 the procurement was limited to 10 batteries. Moreover, the French policy-makers decided to introduce the system only to the Air Force. The French approach was different than Italian one, in the latter case all the SAMP/T batteries were introduced to the land forces. The French batteries of the SAMP/T system are dedicated to defend ground targets such as air bases. The system is capable to protect military formations of the land forces and air force, also during the missions overseas. However, the batteries are not designed to accompany the formations of the armed forces during manoeuvres, which is a common feature in all systems of this class.

According to the producer, the Aster-30 missiles are capable of intercepting various air threats, which are as follows: aircraft and unmanned aerial vehicles, helicopters, ballistic and cruise missiles, as well as aircraft munitions with the radar cross-section exceeding 0,006 m2. However, it is necessary to emphasise that its primary targets are aerodynamic objects (mostly aircraft). System’s capabilities in terms of intercepting ballistic missiles are currently limited due to the specification of the present version of the missiles used in the system (Block 1). Therefore, the system is capable to destroy only short-range ballistic missiles with an operational range up to 600 km. The system’s limitations result from the threat assessment of the weaponry that could be used against France and the priorities of the French Armed Forces.

Because of its geographical location, France is not threatened with a short-range ballistic missile strike. Furthermore, owing to the Intermediate-Range Nuclear Forces Treaty (INF Treaty) from 1987, the land ballistic missile systems with an effective range of 500-5500 km completely disappeared from the European theatre. Under these circumstances the ballistic threat only concerns the units operating overseas, e.g. in the North Africa or Middle East, where the SCUD missile and its variants (an effective range less than 600 km) are still the most common type of ballistic missiles. Furthermore, it is worth emphasising the ballistic threats for NATO Border States, such as Turkey. Therefore, the primary goal of the French air defence system is to protect the country’s territory from aerodynamic targets. Nevertheless, it seems necessary to underline that the new version of the Aster-30 missiles (Block 1NT) is supposed to increase the system’s capabilities in terms of destroying ballistic missiles, which results from two reasons. France wants to strengthen its participation in the construction of NATO Active Layered Theatre Ballistic Missile Defence System, and furthermore, this class of missiles seems to have a high export potential.

A single SAMP/T battery consists of:

The vertical missile launch system is mounted on a truck chassis and is able to intercept targets in 360-degree. According to the producer’s data, a single battery is armed with 32-48 missiles, which are ready to launch, as well as further 16 missiles on reloader vehicles. The system’s radar is capable to track up to 100 targets and to guide 16 missiles simultaneously, including 10 missiles in the phase of a direct attack. The targets can be intercepted at the altitude from 50 m to 20 km, and the maximum range of the system is 120 km, however in terms of destroying ballistic missiles, it is limited to 35 km. The launch of 8 missiles takes 10 s in combat mode. The battery can be operated by just 14 soldiers, it is also worth emphasising that the launchers can be located in a distance of 10 km from each other if the radio data transmission is applied (in case of the optical fiber this distance is limited to 1 km). The system can be transported by the aircraft such as C-130. According to the tests (such as one that took place on March 6, 2013), the SAMP/T system seems to be compatible with the architecture of NATO missile defence. The data transmission can be based on Link-11 and Link-16 data exchange networks, therefore the decision concerning the use of the battery can be made in the Ballistic Missile Defence Operations Center in Ramstein and then directly transmitted to the battery. Consequently, the SAMP/T is nowadays the only NATO missile defence system that has been developed without the involvement of the United States.

The SAMP/T system has not been used in combat thus far, however, the Italian launchers have been deployed on Turkish-Syrian border in June 2016 in order to replace American and German batteries of the Patriot system. The mission in Turkey is the first combat test for the system, apart from the previous operations of the Italian frigate equipped with the PAAMS, which was deployed in the Libyan littoral zone.

Nowadays, there are two operational versions of the Aster-30 missiles: Block 0, which is dedicated to naval vessels; and Block 1, integrated with the SAMP/T batteries. Nevertheless, it seems important to point out the plans concerning the introduction of further two variants, Block 1NT and Block 2. On January 14, the French Ministry of Defence announced that 3 weeks before the Direction générale de l’armement (DGA) signed the contract with the Eurosam consortium regarding the procurement of Block 1NT missiles. Within few months Italy is expected to join this agreement. Another country that could be interested in the acquisition of these missiles is the United Kingdom. The significant differences of the new variant in comparison with the previous versions of the Aster-30 missiles are its capabilities against ballistic missiles. These capabilities should increase significantly with the introduction of the Block 1NT missile in order to provide protection against missiles with the effective range from 1000 to 1300 km. The missile-mounted Ku band radar (2-18 GHz) will be probably replaced by the new radar operating in the K band (26,5-40 GHz). Furthermore, the Arabel radar is expected to be replaced by the new product of Thales. The Ground Smarter 1000 radar is able to detect and follow ballistic missiles in the range of 1000 km. The first delivery for the French Air Force is expected in 2023.

The development phase of the Block 2 missiles has not formally started, however according to the available data the new construction is supposed to be equipped with a new kinetic warhead (the so-called ‘hit-to-kill’), dedicated to intercept ballistic missiles. Moreover, the Aster-30 Block 2 missile will be capable to destroy medium-range ballistic missiles (an effective range up to 3000 km). Consequently, the missile seems to be a counterpart of the American SM-3 Block 1B.

Both Aster-30 and the SAMP/T system are relatively new solutions, with a significant potential for further modernisation. There is no doubt that the technology will be the base for the air defence systems both in France and Italy. Furthermore it is going to one of the crucial elements of the NATO missile defence system for the next 30 years. Among the European states interested in the procurement of this system it is worth mentioning Sweden, which perceives the acquisition of this system as a chance for SAAB company to strengthen the cooperation with Eurosam. Nevertheless, it is necessary to point out that the system was also acquired by Singapore that became its first foreign user.

The SAMP/T system is not only a result of the successful cooperation between France and Italy as the system’s producers, but it is also an effect of reasonable assessment of potential air and missile threats, as well as precise expectations of the Armed Forces of these two countries.