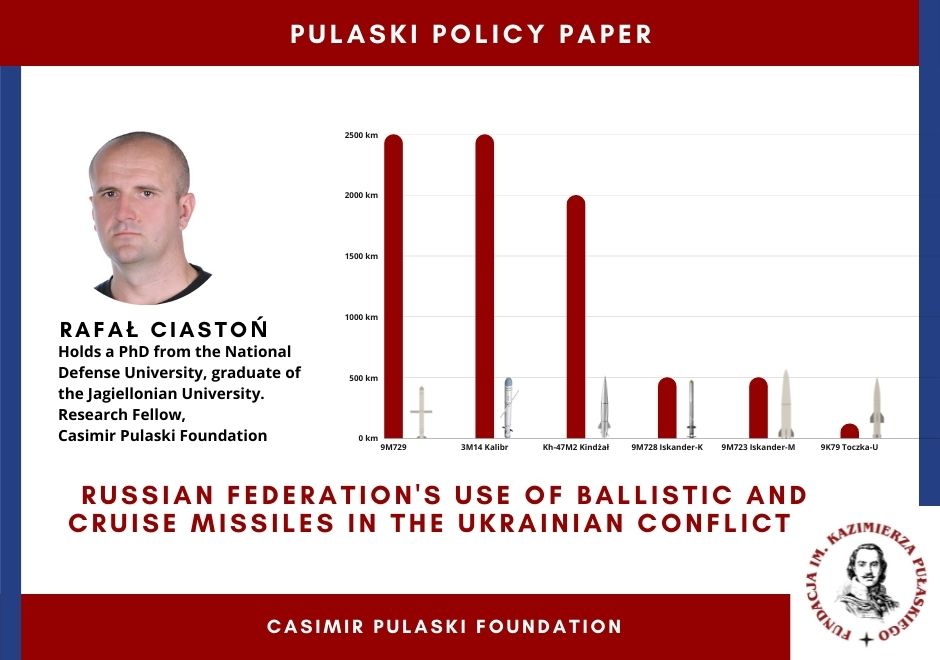 On March 19, the Russian Federation attacked a Ukrainian aerial ammunition depot, located in the Ivano-Frankivsk region, using aeroballistic KINZHAL missiles. Since the beginning of the conflict in Ukraine, Russia has also used ballistic and cruise missile systems. These missiles were mainly used in the initial phase of hostilities against Ukraine’s military infrastructure, although it seems that their sheer scale of use was far from sufficient from a military point of view. It is therefore worth asking what conclusions can be drawn from the use of such systems in the first three weeks of the conflict.

The Russian Federation has a sizeable arsenal of short-range ballistic missiles. In 2022, the ground forces possessed more than 150 Iskander-M (SS-26) missile launchers, with another 12 launchers in the Navy’s (Marines’) inventory[1]. From these launchers, in addition to the 9K723 ballistic missiles[2], the 9M728 cruise missiles (SSC-7) can also be fired. Moreover, Russia has a number of launchers for 9M729 (SSC-8) cruise missiles. While the standard launcher of the Iskander-M system carries two 9K723 or 9M728 missiles, the upgraded version of this system carries four 9M729 missiles. According to The Military Balance, there are 12 brigades equipped with launchers of the first of the above-mentioned types (an additional brigade, i.e. the 13th, operates as part of the Marines) and at least 3 with launchers of the second of the aforementioned types. Missiles of the Iskander system are considered particularly difficult to intercept. In their ballistic version, they are capable of manoeuvring in the terminal phase of flight, which, combined with their speed, poses an extremely difficult challenge to defensive systems. Cruise missiles, on the other hand, are capable of profiling flight depending on the terrain, which also makes their interception difficult. In addition, it should be stressed that the latest version of the missile (9M729) is based on the maritime Kalibr system and has a range of well beyond 500 km, as is the case of its predecessors. It should also be added that Russia has a considerable stockpile of Tochka (SS-21) missiles, for which it kept about 200 launchers in the front line until a about a decade ago[3]. Their number has been gradually decreasing to about 24 in 2019[4], before being completely phased out sometime from now. However, knowing the Russian practice, it should have been assumed that significant stocks of these launchers and missiles are in reserve, which seems to explain why these missiles are being used in the current conflict.

In addition to land-launched missiles, air-to-air missiles are still used in the operation against Ukraine. These were not long-range cruise missiles such as Ch-101 and Ch-555, but air-to-ground missiles Ch-29, Ch-38 and Ch-59. Moreover, sea-launched Kalibr system missiles are also used in attacks on land targets.

The first attacks carried out on February 24, targeted military infrastructure facilities – air bases, arms depots or air defense system sites (so-called SEAD missions), etc. On that day, attacks were carried out against 33 targets in total, using 63 Iskander and 12 Kalibr system missiles. On subsequent days, the number of attacks was significantly smaller: on February 25, 9 targets were attacked and 16 missiles were used (9 Iskander, 7 Kalibr). February 26, saw attacks on 5 targets using 8 missiles (5 Iskander, 3 Kalibr), February 27, saw 7 targets attacked with 10 missiles (1 Iskander, 7 Kalibr, 2 unknown types), February 28, saw 2 targets attacked with 4 missiles (Kalibr). This gave a total of 56 targets attacked and 113 missiles used[5]. The list does not include attacks carried out with the use of air systems. On the basis of the above data, it should be stressed that the scale of the attacks carried out with the use of these systems was in fact grossly low in relation to the potential number of targets. The Ukrainian Air Force has 6 brigades and 4 autonomous air defense regiments, and they are equipped with over 322 anti-aircraft missile launchers (including 250 long-range S-300 and 72 medium-range 9K37M1 Buk). In addition, the ground forces have at least another 81 anti-aircraft missile launchers (including long-range S-300W and medium-range 9K330 Tor missiles)[6]. Of course, it should be assumed that a certain and perhaps even a considerable part of these systems is not operationally available, but they were still important targets which needed to be neutralised in the initial phase of the conflict. On the other hand, it seems that Russia had and still has the capabilities/resources to intensify its air campaign against Ukraine in the short term, although it is difficult to say unequivocally for how long it could conduct such an intensive operation. It is worth making a comparison here with the United States’ use of Tomahawk cruise missiles in the wars against Iraq in 1991 and 2003; and Yugoslavia in 1999, where it deployed 290, 800, and 220 missiles, respectively[7]. Air power was also used in each of these conflicts, with Operation Desert Storm beginning on January 17, 1991, while the ground-based Operation Desert Sabre did not begin until February 24, after more than a month of intensive air campaigning. Operation Allied Force against the relatively small state of Yugoslavia lasted from March 24 to June 10, 1999. It seems that at the moment two main reasons can be identified. First, a quick resolution of the conflict was expected at both the political and military levels. It was probably assumed that the Ukrainian army would not be able to put up organised resistance and would at least partly fall into disarray or adopt a hesitant attitude, as was the case with the occupation of Crimea. In addition, it was most likely expected that the Ukrainian leadership would abandon the threatened Kiev and evacuate either to some city in western Ukraine or even leave the country, which would further undermine the morale of the defenders. At the same time, the limitation of airstrikes was intended to limit civilian casualties and thus relatively less antagonize public opinion in Western countries.

It should be noted that the figures for Russian attacks with ballistic and cruise missiles that we can find in available studies differ. On March 4 this year, the Center for Eastern Studies, citing U.S. studies, reported that 480 missiles had been launched, and as many as 160 of them were to be launched from Russian territory, 70 from Belarus, only 10 from ships operating in the Black Sea, and 230 from Ukrainian territory, where the launchers were relocated[8]. Meanwhile, on March 12 this year, the Ukrainian side reported that 328 operational-tactical missiles had been used by that day, including 154 Iskander, 97 Kalibr, 21 Tochka-U and 56 of unknown types[9]. The differences are therefore significant, and it is also interesting to note how many attacks were conducted from Ukrainian territory. Given that at least half of the missiles launched were Iskander system missiles, the need to deploy them on Ukrainian territory leads us to assume that the 9K723 ballistic missiles and 9M728 cruise missiles are unlikely to have ranges exceeding the officially specified 480 km. A longer range can only be achieved by the newly-deployed 9M729 missiles, which are most likely modelled on the sea-based Kalibr system.

Attacks using the above-mentioned systems are continuing, although their scale remains low. Military targets, including airfields, are being shelled, although there are also cases of (probably) mistaken shelling of civilian targets. On March 14, a training ground in the Lviv region, in the town of Yavoriv, where the Ukrainian Foreign Legion was to be formed, was also attacked. It seems that the scale of attacks in the current stage of the conflict is influenced by two main factors: the lack of a clearly defined further way of conducting military operations, including a list of targets which need to be neutralised, and a kind of economising in the use of the most technically advanced, and at the same time most expensive, means of air attack. It will be a truism to quote Claus von Clausewitz’s thought that war is a continuation of politics. From the Kremlin’s perspective, the war in Ukraine was probably meant to be a “special operation” lasting only mere days, which would result in a change of the ruling team, and the military actions were subordinated to this goal. The use of precision missile systems was intended, on the one hand, to deprive that country of part of its military capabilities and, on the other, to demonstrate Russia’s ability to conduct a modern joint operation. These goals were not achieved, and the Russian military was forced to reorient its campaign with respect to the new political conditions. However, there was the problem of defining the latter and ending the conflict in a way that could be presented to domestic public opinion as a success. This made the war all the more difficult by the fact that if reports of Russian losses are even half true, then we must speak of a total military defeat and personnel and equipment losses that are difficult to compensate for. In this situation, attacks conducted with the use of ballistic and manoeuvring systems have only a reactive and ad hoc character; e.g. the attack on the airport and repair facility in Lutsk, carried out on March 11, should be regarded as such. Individual targets are neutralized, but it is difficult to speak of the implementation of a predetermined scenario.

1. The scale of Russia’s use of ballistic and cruise missiles is militarily far from sufficient. This is a result of unrealistic political assumptions about the expected duration of the conflict made at the planning stage.

2. It appears that attacks with ballistic and cruise missiles are currently ad hoc. Their purpose is to prevent the Ukrainian air force from conducting air operations and to destroy selected elements of military infrastructure and living forces. In the case of attacks on non-military targets, they may also be of psychological nature, i.e. intimidating the civilian population.

3. According to Ukrainian reports, air defences have managed to intercept at least some Iskander system missiles, but it is not clear whether these have been ballistic or cruise missiles.

4. The introduction of Iskander launchers into Ukrainian territory partly demonstrates the limited range of these missiles, which does not exceed the declared value of some 480 km. On the other hand, the use of the Tochka-U system, which was withdrawn from the line-up several years ago, indicates the limited resources of missiles of newer types.

[2] As per the Military Balance, these are actually the 9K720 missiles, however in a export variant, with the range reduced to 280km (as per the MTCR agreement).