The Syria peace process - a chance to end the conflict? 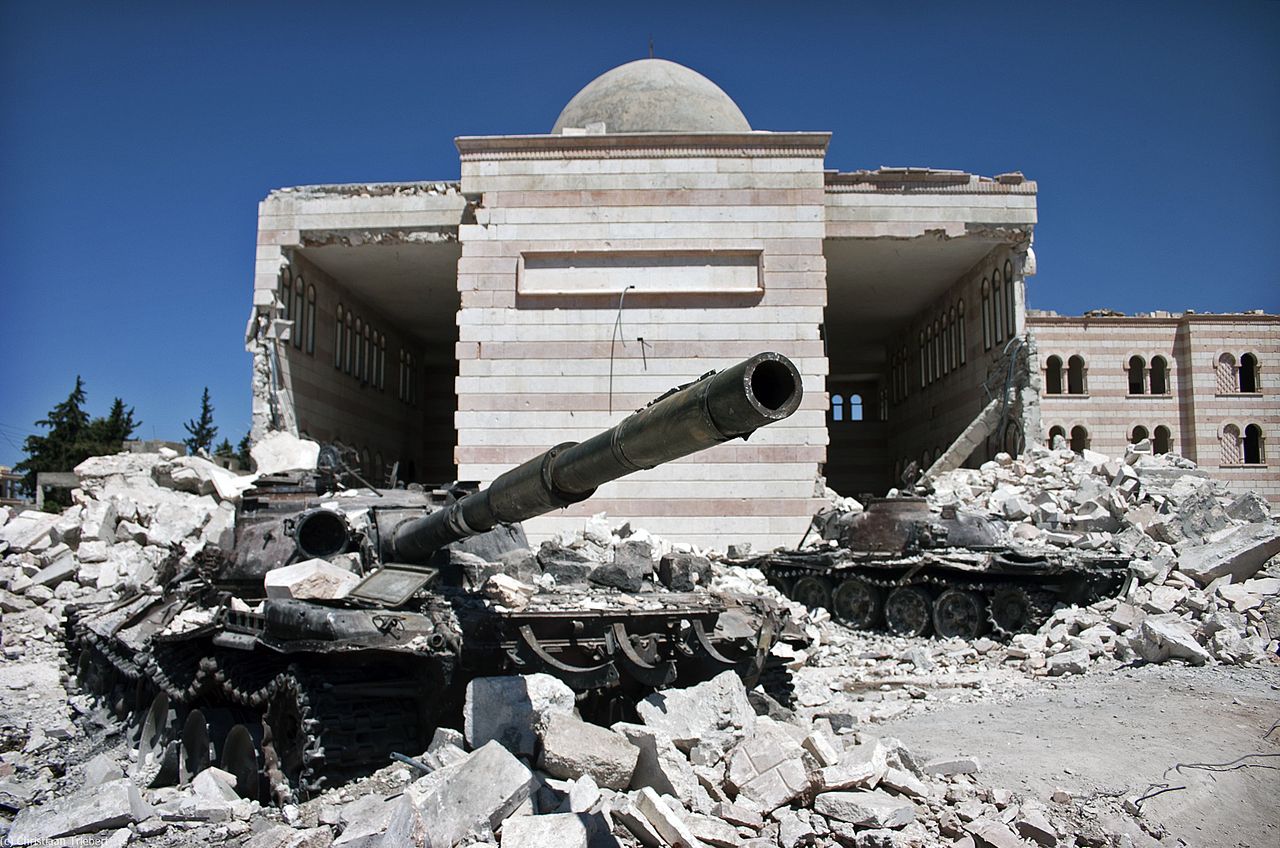 According to the Syrian Observatory for Human Rights (SOHR), the Syrian civil war is responsible for the deaths of nearly 250,000 people since it began in 2011. More than four million Syrians have been registered in refugee camps, and almost eight million people can be described as Internally Displaced Persons (IDP). Despite all efforts, including those made by the Group of Friends of the Nation of Syria, the Geneva meetings, UN resolutions and the ‘Inherent Resolve’ military operation led by the United States and its allies, the situation in Syria has not been stabilized.

The situation has been further complicated by Russia and Iran, who have joined in the conflict in support of the regime of Bashar al-Assad. The meetings initiated in Vienna aim to restore peace in Syria.

The first meeting in Vienna took place on October 23, 2015. The talks were led by U.S. Secretary of State John Kerry, Russian Foreign Minister Sergei Lavrov and the Foreign Ministers of Saudi Arabia Adil al-Dżubeir and Turkey Feridun Sinirlioglu. A solution was not found during the talks, but Secretary Kerry acknowledged that the meeting had been constructive and useful. Future discussions might be joined by Iran and Egypt, something encouraged by minister Lavrov.

Further meetings took place on October 29 and 30, 2015. Russian diplomacy succeeded in extending the composition of participants to Iran, an ally of President al-Assad and an enemy of Saudi Arabia. Meanwhile, Russia blocked US allies Australia and Japan from joining the talks (Australia is actively participating in air operations in Syria and Iraq). Ultimately, 17 countries attended the talks (Turkey, Italy, United Kingdom, Lebanon, Iran, Jordan, Russia, Saudi Arabia, Iraq, Egypt, Germany, Qatar, France, United Arab Emirates, Oman, USA and China) as well as representatives of the UN and the EU.

In the final declaration [annex I] a nine-point statement was announced, which was to become more concrete at the next meeting. The statement stressed the consent regarding the need to quickly find a diplomatic solution to the conflict in the course of a peace process under the supervision of the UN. It was stressed that the foundation of the future Syria is the unity, independence, territorial integrity and secular character of the state. It was also confirmed that humanitarian aid for victims of the conflict would be provided. One of the goals is also to hold an international meeting with representatives of the government of Bashar al-Assad and the opposition. The result of negotiations would be the formation of a transitional government that will lead the country until the next elections. The next step should be adopting a new constitution.

The sixth point highlighted the efforts aiming at defeating the so-called Islamic State, terrorist organizations listed by the UN Security Council, and other organizations recognized by the members of the meeting as terrorist. This point might be considered as tacit approval for Turkey to conduct further air-raids on positions of the PKK (Kurdistan Workers Party) in Iraq or YPG / YPJ (People’s Defense Units) in Syria, which is considered terrorist by the authorities in Ankara. Russia’s creative solution was submitting a list of 38 opposition organizations that could participate in peace talks. The U.S. promised to present their own list. It is very important because the US criticizes Russia for conducting air raids against groups fighting against Bashar al-Assad, and which it considers as allies and calls ‘moderate opposition.’

3rd and 4th meeting of the International Syria Support Group – a breakthrough in the conflict in Syria?

On November 14, 2015 the third meeting took place in Vienna. The Secretary General of the League of Arab States joined the group of participants. The preliminary agreement assumed the establishment of the 18-month transition period, a ceasefire plan was agreed (the permanent members of the UN Security Council agreed to adopt an appropriate resolution), ultimately starting from January 1, 2016. Then talks would be held between the government and the opposition, creating a new constitution, followed by elections. The national unity government would be built in 6 months. The entire peace process is to be supervised by the UN. The rules of ceasefire and negotiations would not apply to the so-called Islamic State and associated with Al-Qaeda an-Nusra Front. The conference participants agreed that Jordan would coordinate the development of a list of terrorist groups in Syria. The future of President Bashar al-Assad was not established. Representatives of the United States, of other Western countries and the Arab countries are in favour of his removal from power. On the other hand, Russia, Iran and China believe that the future of the Syrian president must be decided in the course of elections.

The fourth meeting was held in New York on December 18, 2015. Outside the current participants, the talks were also attended by UN Secretary General Ban Ki-Moon. A UN Security Council resolution on Syria was drafted. It has taken a form of a road map for the peace process in Syria, where earlier points from Vienna were repeated, i.e. the ceasefire plan, the creation of the transitional government within 6 months, holding elections, the adoption of a new constitution within 18 months. However, the future role of Bashar al-Assad in Syria was not decided. The agreement was adopted unanimously by members of the Council.

The composition of opposition groups, which were planned to participate in future talks, was initially not clear. On November 6, 2015 the Syrian National Coalition with its chairman Khaled Khoja met in Geneva with the Special Envoy of League of Arab States to Syria Staffan de Mistura, and also took part in the meeting in a smaller group in Vienna on November 15, 2015 with representatives of Turkey, Qatar and Saudi Arabia. Two days later, chairman Khoja phoned US Secretary of State John Kerry.

According to media reports in November 2015, four countries submitted their own lists of opposition groups. These were Russia, Egypt, the United States and Saudi Arabia (however, the latter did not disclose the names of the groups, but the names of opposition activists, who should participate in the talks, and then create a new government). It was not disclosed who was on those lists.

The meeting of Syrian opposition groups on December 9, 2015 in the Saudi Arabian capital Riyadh was particularly significant. It was attended by over 100 representatives. Within two days a 34-member committee was appointed to oversee the peace talks (High Negotiations Committee). In the committee there were 11 representatives of the rebel armed units, 9 representatives of the Syrian National Coalition (including Khoja), 6 from the National Coordination Committee and 8 independent members. The group chose their main coordinator from its members. It was a former Prime Minister of Syria (from June to August 2012) and longtime Agriculture Minister Riad Hijab (he earlier belonged to a group of faithful supporters of Bashar al-Assad, but later he fled to Jordan, then to Qatar, and supported Syrian rebels). The next step would be a choice of 15 members who will represent the opposition in Geneva.

The invitation and participation (with the permission and the pressures of Saudi Arabia, Qatar and Turkey) of Ahrar ash-Sham group was particularly controversial. It is an organization founded in 2011 and linked to Al-Qaeda, and one of the numerous militias fighting in Syria (approximately 10-15 thousand members). One of its goals is to introduce a Sunni Islamic state in Syria, and it refers to Salafism in its ideology. Representatives of the Ahrar ash-Sham left the conference saying that their role was minimized. Finally, a representative of the organization signed a final document (presumably under the pressure of the group being put on the list of terrorist organizations), although some part of its members did not acknowledge this fact.

One of the main problems is the fate of the Syrian president. Before taking part in the Geneva talks planned in 2016, the opposition had demanded his departure from office at the start of the transition process and establishing a schedule of this process.

Syrian Kurds led by the Democratic Union Party (PYD), were not invited to Riyadh. The reason was their apparent passivity in the fight against Bashar al-Assad, and focusing on the fight only against the so-called Islamic State. The pressure exerted by Turkey was the decisive reason. However, one of the Kurds was elected to the High Negotiating Committee (Abdelhakim Bashar, closely associated with the Democratic Party of Kurdistan in Iraq, which has good relations with Ankara).

The Kurds and their allies in Rojava organized their own conference (December 9-10, 2015) in Al-Malikijja (Kurd. Derik). The establishment of the Syrian Democratic Assembly was agreed, which would be the political arm of the Syrian Democratic Forces (SDF), created in October 2015. The SDF includes YPG units and Arab and Christian militias. The Assembly would consist of 42 members. Importantly, the members of the conference believe that President Bashar al-Assad was responsible for the civil war in the country, but he is also the key to solving the conflict. For this reason, they would not rule out the possibility of peace talks with the regime.

Annex I – Final declaration on the results of the meeting held on October 30, 2015

COMMENTARY: The diplomatic conflict between Russia and Turkey: a challenge to energy security