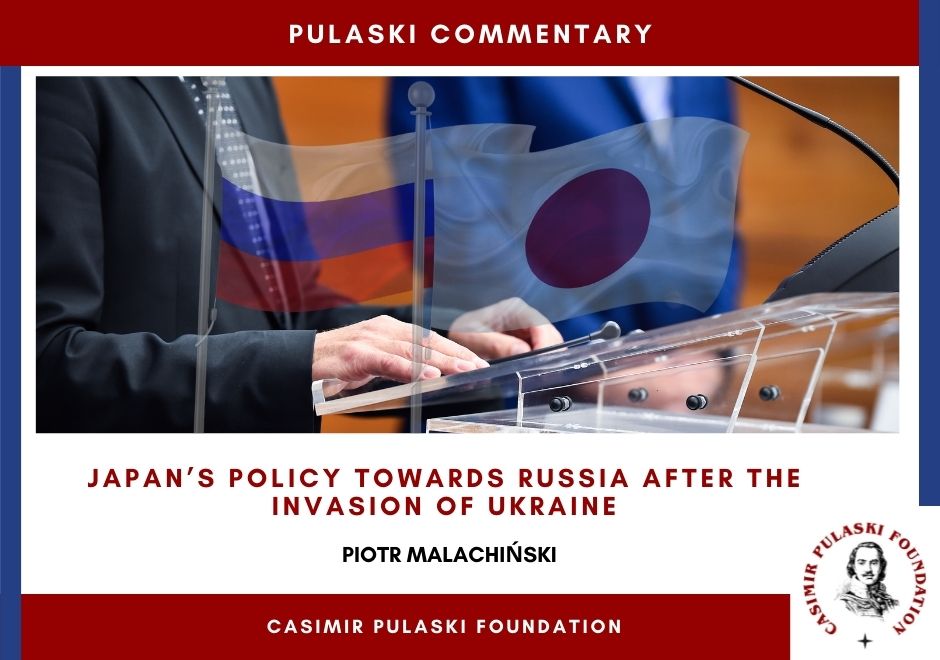 Russia’s recent invasion of Ukraine, which started on February 24, 2022, has forced Japan to rethink its strategy towards Vladimir Putin’s regime. The previous administration of Shinzo Abe sought a closer cooperation with Russia and engaged with it on both economic and political level, including in the matters of security. However, the new prime minister Fumio Kishida’s clear and open stance against the Russian aggression marks a turning point in the two countries’ relations. This change of attitude is seen in the verbal criticism, extensive sanctions, but also plans to change Russia’s status in Japan’s National Security Strategy, which suggests a long-term perception shift.

Under Shinzo Abe’s premiership, Japan made efforts to appeal to the Russian Federation and extend the level of cooperation between the two countries. This included strengthening economic and energy ties, negotiations on the long-overdue peace treaty, as well as different security initiatives. Notably, Japan and Russia held numerous security meetings in the “two plus two” format since 2013. Joint military drills were organised, including the 2019 Search and Rescue Exercises and the 2020 anti-piracy drills in the Arabian Sea.[1] Numerous energy-related projects were proposed (though never executed) even before the Abe era, notably the Angarsk-Nakhodka oil pipeline and the Sakhalin-Hokkaido LNG pipeline. Despite the failed plans, Russia is still Japan’s major supplier of energy resources – roughly 11% of Japan’s coal imports, 8% of LNG imports, and 5% of crude oil imports come from there.[2]

Besides concerns over its energy security, Japan’s motivations to strengthen the bilateral relations were twofold. First, Abe believed that economic cooperation with Russia could curb the latter’s further rapprochement with China, considered Japan’s main security threat and regional rival. This is reflected in Japan’s National Security Strategy drafted under Abe in 2013, which states that “under the increasingly severe security environment in East Asia, it is critical for Japan to advance cooperation with Russia in all areas, including security and energy, thereby enhancing bilateral relations as a whole, in order to ensure its security.”[3] Besides, since 2012, Shinzo Abe vowed to resolve all the territorial disputes from the WWII period, including with Russia. Abe’s foreign policy of “total settlement of post-war diplomacy” assumed the return to Japan of the south Kuril Islands (known in Japan as the Northern Territories), under Soviet control since 1945.[4] Proper relations with Putin were seen as a prerequisite to achieving it.

This policy certainly boosted Russia’s image as Abe was the only G7 leader to resume such cooperation with Putin after several months of solidarily freezing it and sanctioning the regime in light of the annexation of Crimea.[5] However, by October 2020, when Abe stepped down as prime minister, it wielded few results for Japan itself. Abe failed to convince his Russian counterparts to support Japan in any major security disputes in East Asia, and Russia-China relations flourished despite his efforts. Moreover, after initially supporting a compromise with Japan, Vladimir Putin and Sergey Lavrov quickly tightened their grip on the Kuril Islands and worked to militarise it, deploying infantry brigades on the islands and setting up coastal and air defence missile systems.[6]

Fumio Kishida’s firm response to the war in Ukraine

These shortcomings, coupled with the preoccupation with the Covid-19 pandemic, would explain why Abe’s successor, Yoshihide Suga, cooled down on his pro-Russian efforts.[7] But it is only under the current prime minister Fumio Kishida, who served as Abe’s foreign minister, that we observe a clear break from Abe’s policy. The turning point was Russia’s military build-up next to the border with Ukraine, which started in October 2021 and culminated in a full-scale invasion of Ukraine.

Fumio Kishida became vocal about the Russian concentration of troops by the Ukrainian border as early as in late January 2022. Yet, before the actual invasion, the diplomatic reaction was rather cautious, advocating for a diplomatic resolution of the crisis while highlighting the importance of Japan-Russia relations. The invasion of February 24th meant a complete break from that – since then Kishida would condemn Russia’s invasion of Ukraine on multiple public occasions. The reaction only hardened after Putin ordered the nuclear deterrence forces on high alert, as Kishida is especially engaged in promoting nuclear non-proliferation.[8]

On February 17, Kishida warned: “If we allow any change in the status quo by force, it will send a wrong message, not only to Europe but to Asia and the rest of the world.”[9] This language suggests a major security threat the invasion poses to Japan – it could serve as a precedent or an excuse for other states like China to act on their expansionist ambitions, for example in the Taiwan Strait. This explains the announcements of Japanese officials that Russia’s status in the revised 2022 National Security Strategy will change from a “partner” that could help ensure peace in East Asia to a security “challenge,” placing it alongside China and North Korea.[10] Consequently, Kishida deemed any talks about the peace treaty and the territorial dispute resolution unthinkable in the near future.[11] At the same time, he started using more confrontational language to describe the South Kuril Islands, referring to them publicly as Japan’s “integral territory” under Russia’s “occupation”.[12]

Japan’s response did not stop on words. The government provided direct aid to Ukraine in forms of loans and humanitarian aid (100 million USD each), while also accepting Ukrainian refugees. Defence minister Nobuo Koshi announced in turn delivery of non-lethal equipment like bulletproof vests to Ukraine. Japan also banned military-related exports to Russia and sanctioned dozens of Russian and Belarusian individuals, including Putin and Lukashenko, and encouraged other Asian states to follow suit. The government also froze assets of Russian banks and committed itself to cutting their access to the SWIFT system.[13] These actions did not go unnoticed in Russia, as the Russian Ambassador to Japan threatened retaliation for Japan’s measures, deemed “counterproductive” to their friendly relationship.[14] The peace treaty talks between the two have been officially suspended by the Russian side.[15]

The relations between Japan and Russia have not been worse in years if not decades. While the war in Ukraine is the main reason for the current estrangement, the end of the crisis is unlikely to bring back Japan’s pro-Russian enthusiasm. It is safe to assume that the failures of the previous administrations have discouraged the new prime minister from seeking friendly relations with Putin and balancing between Russia and the US – Japan’s main security ally. The unusually firm reaction to the ongoing crisis suggests that Japan will no longer stand out as the most indulgent G7 state towards Vladimir Putin’s regime. We may expect Japan to act in better accordance with the Western bloc regarding not only security threats in Asia but also in Europe. This would be an important asset for countries of the NATO eastern flank like Poland, the most threatened by Russia’s expansionism. In terms of energy security, Japan’s pro-Ukraine position may help the EU reduce its dependency on Russian energy – Japan already vowed to offer emergency deliveries of LNG to its European allies.

[8] Press Conference by the Prime Minister regarding a Summit Conference Call on the Situation in Ukraine, Prime Minister of Japan and His Cabinet (March 1, 2022),  https://japan.kantei.go.jp/101_kishida/statement/202203/_00002.html

[11] “Press Conference by the Prime Minister regarding Japan’s Response to the Situation in Ukraine,” Prime Minister of Japan and His Cabinet, last modified February 27, 2022, https://japan.kantei.go.jp/101_kishida/statement/202202/_00014.html.