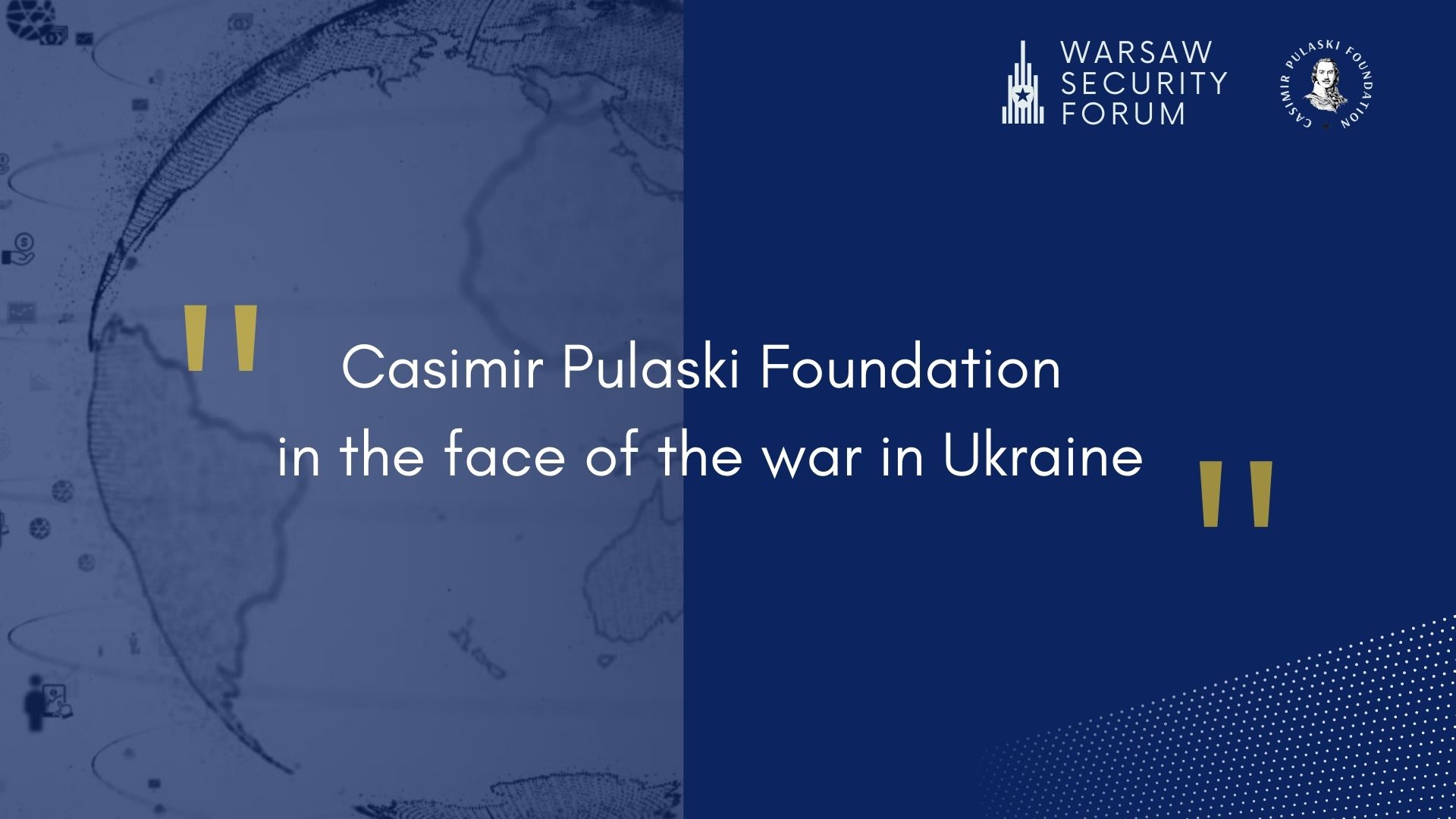 Providing assistance to activists from Ukrainian non-governmental organizations, supporting the activities of the newly established International Center for Ukrainian Victory and the organization of 2022 edition of the Warsaw Security Forum… those are the three most important priorities of the Casimir Pulaski Foundation after the outbreak of the war in Ukraine. Since February 24th the Foundation uses its experience to support Ukrainian NGOs while simultaneously planning this year’s edition of the Warsaw Security Forum.

Since Russia’s illegal aggression against Ukraine, the eyes of the whole world have been focused on the tragedy we are witnessing. Within a month, 10 million Ukrainians had to leave their homes, with almost three million fleeing to Poland in search of a safe haven. With the Russian aggression, the Ukrainians’ immediate plans changed rapidly and affected not only individuals but also non-governmental organizations.

Foundation in the face of war

From the first day of the war, the Foundation focused on helping activists from the Ukrainian third sector. In addition to providing accommodation and care for their families, it was necessary to ensure that activists could restart their mission in Poland and assure as many advocacy oppurtinies as possible. Since the first days of their presence in Poland Ukrainian activists constantly sought international support for Ukraine in meetings with politicians from around the world – among others with British Prime Minister Boris Johnson, US Secretary of State Antony Blinken, representatives of the German Bundestag, the U.S Congress and Polish and European ministers and parliamentarians.

In addition to the advocacy assistance offered to specific organizations, the Foundation also decided to organize transports of the most needed aid for Ukrainians fighting the Russian invasion in the first days of the war. The Foundation’s employees invested their funds, time and determination to organize medications and non- lethal military equipment. Until other organizations were able to coordinate large-scale aid, the materials purchased by the Foundation were sent to Kyiv and helped save the lives of many soldiers fighting for Ukraine’s independence.

On the seventh day of Russia’s aggression – on March 4th – the International Center for Ukrainian Victory inaugurated its activity in Warsaw. Its purpose is to advocate for more military assistance to Ukraine, to expand sanctions against Russia and Putin’s inner oligarchs, to document Russian war crimes and to advocate for solving humanitarian issues caused by the Russian invasion of Ukraine. The Center is also focusing its work on creating a plan (known as the “Marshall Plan” for Ukraine) for the post-war reconstruction, transformation and Ukraine’s accession to the EU (more information – http://ukrainianvictory.org/).

A unique edition of the Warsaw Security Forum

Currently – after ensuring the conditions for the functioning of the International Center for Ukrainian Victory – the Casimir Pulaski Foundation focuses on the organization of the 2022 Warsaw Security Forum. A priority in the context of the Russian aggression against Ukraine is to adjust the topics of discussion and to ensure the presence of representatives of the international diplomatic environment. The Foundation’s ambition for this year’s Warsaw Security Forum is to bring concrete results and clear answers to questions about the reasons for Russia’s unprovoked aggression against sovereign Ukraine, and about how to end the war and ensure peace and prosperity in Europe in the near future.

This year’s – ninth – edition of the Warsaw Security Forum will be held on October 4-5.

We invite you to follow the Casimir Pulaski Foundation:

The Casimir Pulaski Foundation is an independent Polish-think tank specializing in foreign policy and international security in the Transatlantic space.

The Foundation publishes analysis describing and explaining international events, identifying trends in the international environment and recommending solutions for government decision-makers and the private sector.

The Casimir Pulaski Foundation is the initiator and main organizer of the annual Warsaw Security Forum conference (https://warsawsecurityforum.org/), which has become a permanent feature of the European landscape of conferences devoted to transatlantic cooperation and focusing on elaborating shared responses to common transatlantic security challenges. Organized since 2014, the Warsaw Security Forum is a platform for the exchange of views between the highest representatives of governmentes, international institutions, industry, think tanks and experts in the field of politics and defence.

Each year the Foundation presents the “Knight of Freedom” award to outstanding figures who contribute to the promotion of the values ​​of General Kazimierz Pulaski, i.e. freedom, justice and democracy. It is also the home to the Women in Internation Security Poland network.

The Casimir Pulaski Foundation ranks first among Polish Think Tanks dealing with defence and national security according to the ‘Global Go To Think Tank Index’ report in 2018, 2019 and 2020.

The Foundation also has the status of a partner organization of the Council of Europe.