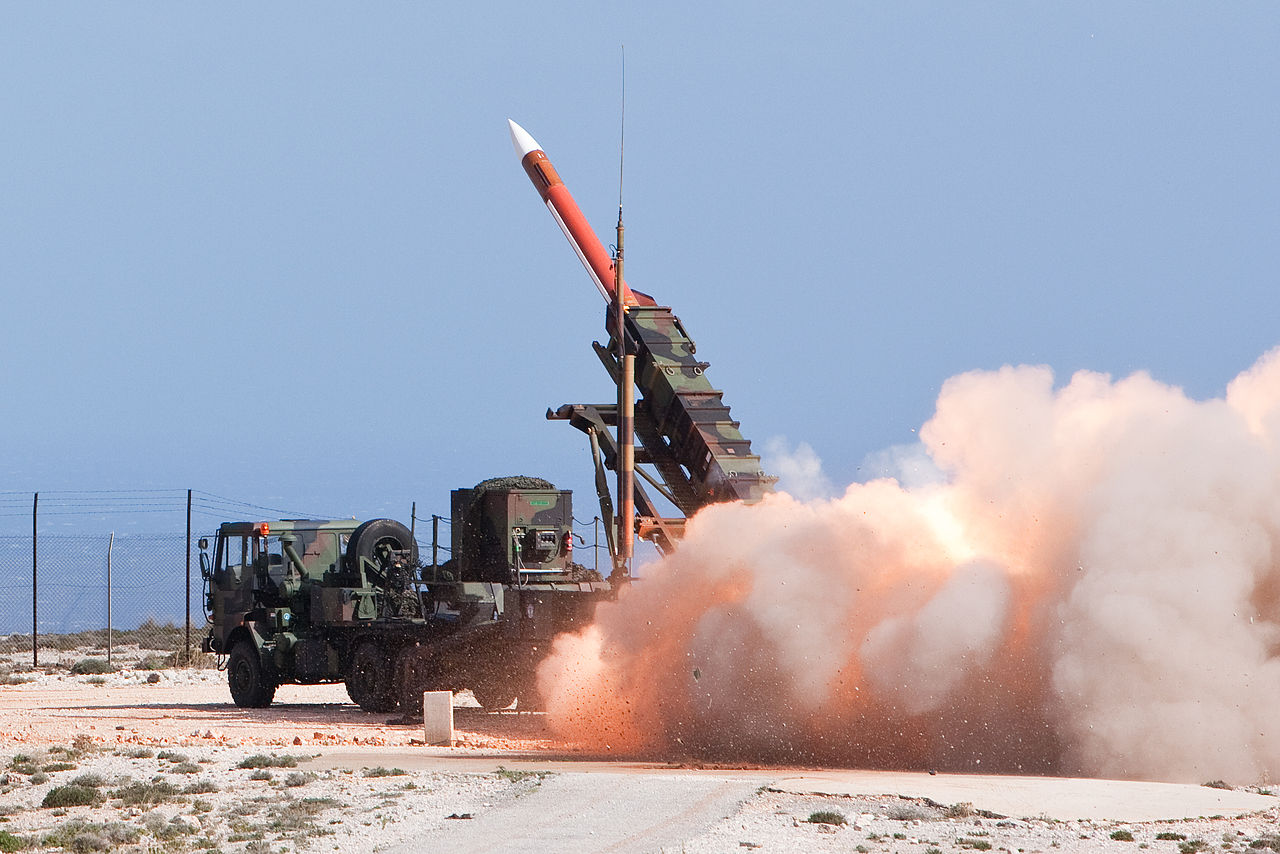 In early days of March 2016, Polish experts, including representatives of the Pulaski Foundation, have visited Raytheon’s manufacturing plant in Andover, MA. The facility specializes in production of the PATRIOT air defence system components, including the GaN-based, 360° AESA radar prototype. The radar is offered to the Polish Armed Forces as principal fire control sensor for the medium-range air and missile defence (MRAD) system “Wisła”. The radar is currently in the R&D phase and the pace of development is dependent, among other factors, on Raytheon winning the “Wisła” tender. These circumstances should strengthen the position of Poland in negotiations with Raytheon, particularly in relation to the desired technology transfer to the Polish industry.

The history of development

The directional AN/MPQ-65 radar with a single, passive, phased array antenna is the primary sensor of the currently available Patriot PAC 3+ configuration.  This radar does not meet the technical requirements of the Polish Ministry of Defence for the “Wisła” system, particularly in terms of providing 360-degree coverage. Consequently, Raytheon has offered to develop an evolutionary version of the MPQ-65 radar, using Active Electronically Scanned Array (AESA) technology and gallium nitride (GaN) semiconductors. The 360-degree coverage would be provided by adding two rear panel antennas, each with an area 1/4 the size of the main antenna.

The construction of the prototype started in 2014. First, a single rear panel antenna (pilot array) was constructed and tested. Antenna is using both AESA and GaN and was integrated with the track-via-missile (TVM) guidance module used in GEM-T interceptors. Then, in 2015, Raytheon conducted interoperability tests of the rear AESA antenna and the standard passive phased array front antenna from PAC 3+ configuration. After software integration, both antennas were placed at a 45° angle against each other in order to observe commercial aircrafts taking off from the Boston Logan International Airport (distance of 40km). The image was seamlessly integrated when observing aircrafts as they moved from one antenna’s coverage area to the other. This proved the interoperability of the new antenna with the components used in the current PAC-3 configuration. However, the angle between the antennas (45°) combined with horizontal ranges for GaN AESA antenna (150°) and MPQ-65 antenna (120°) could not have demonstrated a 360° coverage capability.

Successful tests of the rear antenna enabled construction of the main antenna in late 2015. The March 2016 media visit in Andover was the first presentation of the new GaN AESA main array mounted on a shelter and chassis. During operational engagements, this fire control antenna would be guarding the area designated as the main threat sector.

The new antenna was mounted on a chassis used in the older generation of the PATRIOT system (probably a former AN/MPQ-53 of the German Armed Forces). The evolutionary approach to the radar’s development foresees modernisation by replacement of the internal components of radar’s shelter, while maintaining compatibility of the entire system (“bolt-on replacement”). The presented prototype was upgraded with a power supply and cooling systems for all three antennas as well as a hydraulic actuators for lifting the front panel.

The transmit/receive modules on the main array form a rectangular shape and are capable of integrating both the main and auxiliary arrays. The AESA modules are built using very efficient gallium nitride (GaN) semiconductor. This technology can significantly improve all of radar’s characteristics, such as detecting and tracking capabilities (number of tracked objects), as well as range and accuracy of the system. Similarly to its predecessors (MPQ-53 and MPQ-65) the GaN-based AESA is a starring-array radar. However, the shelter is mounted on a 360-degree rotary platform that allows it to reorient if the main threat sector shifts.

The new antenna covers a surface comparable to the MPQ-65, leaving approximately 40% of the front panel’s surface unused. Furthermore, in contrast to the rear array, the TVM guidance module has not yet been integrated in the main array. Therefore, depending on customer needs, significantly more T/R modules could be placed on the front panel. Such a change could further increase radar’s capabilities; however it would also increase the cost of production. Therefore, the design of the front panel won’t be finalized until after a contract with the first client is signed. This exemplifies decisions – and risks – associated with purchasing newly designed equipment.

The AESA technology makes certain elements of MPQ-65, such as the comparator and the shroud, redundant. Furthermore, use of gallium nitride technology reduces the weight and space needed for cooling and power systems, while providing superior physical properties than the gallium arsenide used in MPQ-53/65. Therefore the total weight of the new 360° GaN-based AESA radar, including the two pilot arrays, is expected to be only 40kg heavier than the sector PAC-3 radar. The rear antennas are expected to be mounted on the prototype by the end of 2016.

Discussions on industrial and technological cooperation associated with MRAD “Wisła” procurement were key elements of the visit in Andover. Prior to 2016, Raytheon presented a number of proposals regarding to the technology transfer and placing production of PATRIOT batteries in Poland. In 2014 Raytheon signed an agreement with Bumar Elektronika (today: the PGZ group) regarding the production of the IFF antenna. During the visit, Raytheon officials stressed that this cooperation would continue regardless of Poland’s final decision concerning
“Wisła”. Also in 2014, Raytheon signed an agreement with Teldat S.A., for development of next generation military routers. In December 2015 the companies established details concerning delivery of the first batch of devices, which will be installed in batteries manufactured for PATRIOT users worldwide.

Other opportunities for the Polish defence industry are related to the modernisation of the older generation of MPQ-53/65 radars to the GaN-based AESA standard. According to Raytheon the replacement of the main array as well as the installation of rear antennas is possible “in a few weeks’ time, any place [in the world, which is] equipped with a crane.” Polish industry could be involved in the modernisation process of over 220 fire units, used by 13 international PATRIOT users. Poland could also take part in development of the new S-Band Oscillator, integration of the system with the Polish command and control system, modernisation of AESA cooling system and other changes in the radar’s architecture. However, no offers regarding the transfer of the most innovative technologies to the Polish defence industry, such as gallium nitride or AESA, were discussed in Andover.

In the near future the prototype will be field tested and then sent back to the manufacturing plant in Andover to have the pilot arrays mounted. The R&D pace depends on orders and financing from customers. Raytheon has already started negotiations with other PATRIOT operators, however the negotiations with the Polish Armed Forces seem to be most advanced. According to Raytheon representatives, the radar’s development phase would be completed within 65 months from signing the contract with the Polish Armed Forces.

A contract for “Wisla” would constitute a significant order in terms of Raytheon’s capabilities. The manufacturing plant in Andover is currently the only place where AN/MPQ-65 radars are manufactured and modernized. During the Polish visit, only 10 radars of this kind could be spotted on the assembly and repair floor. Presumably, they belong to Saudi Arabia and Qatar and were undergoing modernization only. By comparison, Poland plans to acquire 2 radars for each battery, which translates into 16 brand-new radars. Therefore, the Polish order would have a significant impact on the production line in Andover as well as the PATRIOT program in general. Moreover, it would potentially encourage other PATRIOT users to modernise their radars at Raytheon’s facility. This constitutes leverage and a valuable argument for Poland as it proceeds with negotiations for the “Wisła” system.

Raytheon continues the development of the 360 ° GaN-based AESA radar. When fully developed, it would become a world-class, cutting edge sensor. In particular, the radar incorporates gallium nitride semiconductors, the most promising material in radar technologies today. The new PATRIOT AESA radar would be one of the first military cases of using this technology, just after the programs such as the Next Generation Jammer (used in EF-18G Growler aircraft and probably in F-35 in future), or the new U.S. NAVY AN/SPY-6 radar.

However, a number of crucial components still need to be developed. The second rear panel has to be constructed, both rear panels mounted on the chassis and integrated with the front panel to form a 360° system. Completion of this process will require considerable financial and organizational resources and is inherently tied to R&D risk of failure. Moreover, no sale contracts have been signed so far, so in the coming months R&D burden will be carried solely by Raytheon.

From the Polish perspective, investing in a developmental project entails technical (compatibility of radar elements) and financial (unknown serial production costs) risks. On the upside Poland would become the first and thus pivotal purchaser of the GaN-based AESA radar. This presents an important asset in negotiations with Raytheon, which could increase involvement of the Polish defence industry as well as the transfer of military technologies to Poland.

Maintenance of F-16 through Foreign Military Sales – a dangerous shortcut