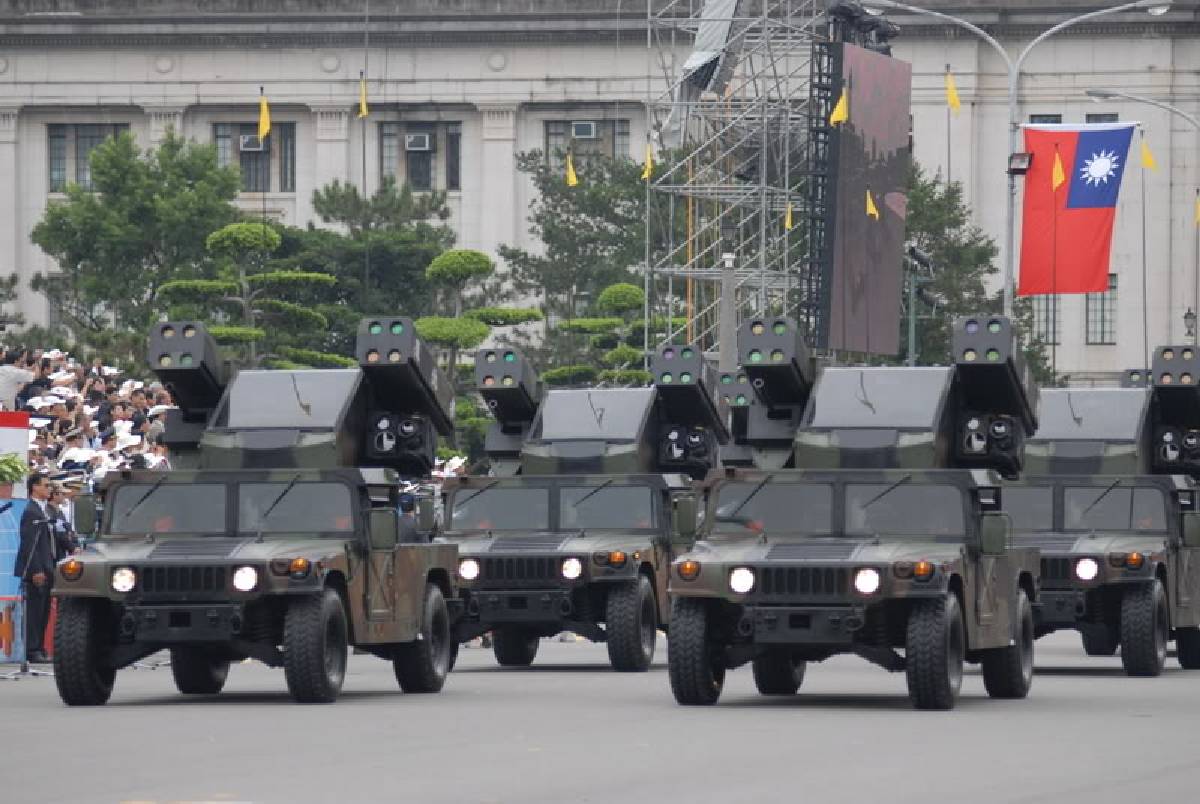 Taiwan (officially the Republic of China, ROC) is a country paying close attention to its security as well as the efficiency of its armed forces. Since the victory of Chinese communists in 1949, Taiwan and the People’s Republic of China formally remain in a state of conflict, despite détente in recent years (China perceives Taiwan as a rebellious province, therefore, Beijing has never renounced the possibility of using force to take control over the island). Thus, Taiwan maintains the armed forces with a strength of 215,000 soldiers (and 1,6 mln of reserve personnel) and spends approximately 2% of its GDP on defence (Taiwan’s military spending is continuously decreasing and according to experts’ opinions its current budget is not sufficient). The island, which is located less than 200 km from the coast of China, is extraordinarily vulnerable to a potential ballistic missile strike of the Chinese People’s Liberation Army. Achieving and sustaining air superiority is absolutely crucial to defend the island against massive landing operation from the continent, and therefore, Taiwan ought to possess advanced capabilities in terms of air and missile defence.

Nike Hercules was the first anti-aircraft missile system acquired by Taiwan. The United States deployed batteries of this system during the Second Taiwan Strait Crisis in 1958, and afterwards the armed forces of Taiwan acquired systems of this type (Nike Hercules was officially decommissioned in 1996). Taiwan is a user of the US medium-range (range of approximately 40 km) surface-to-air Improved Hawk missiles (I-Hawk) to date.

In 1997, Taiwan acquired Patriot PAC-2 system with 200 missiles, which is more advanced air defence system capable to intercept hostile missiles. In the 1980s, Taiwan commenced developing its own air defence systems  of Sky Bow (Tien Kung) family. Taiwan has acquired further 7 batteries of the Patriot PAC-3 system and upgraded its previously received Patriot systems during a series of military equipment purchases from the United States. A powerful early warning AN/FKPS-115 Pave Paws radar in Leshan has become an addition to Taiwan’s air defence system. The construction of the Pave Paws radar began in 2009. The radar was launched for the first time in December 2012I.

Taiwan is one of the most threatened countries in the world by a ballistic missile strike. A potential full-scale conflict between People’s Republic of China and Taiwan would probably begin with massive missile strikes or combined aerial and missile attack in order to destroy Taiwan’s air defence systems. The scope of possible targets in Taiwan include command and control centres, early warning radars as well as air bases with intent to destroy as large part of relatively strong air force on the ground (before its redeployment) as possible. ROC Air Force is based on: 144 F-16A/B fighters, which are currently being upgraded to F-16V variant; 56 Mirage 2000 aircraft; and 100 F-CK-1 Ching-kuo indigenous fighters. A primary task of Taiwan’s anti-aircraft and missile defence system is to detect potential threats as soon as possible and ensure the armed forces’ capability to survive massive aerial and missile attack.

The Taiwan’s anti-aircraft and missile defence system consists of the early warning radar network and dozens of missile batteries of various types and ranges, which are as follows:

The Patriot system batteries are still the most important element of Taiwan’s anti-aircraft and missile defence. In 1997, Taiwan acquired from the United States three batteries of the Patriot PAC-2 Plus system equipped with GEM missiles (Guidance Enhanced Missiles), and deployed them around Taipei, the capital city of Taiwan. According to the Congressional notifications of arms sales to Taiwan in 2008 and 2009, Taiwan acquired further seven Patriot missile batteries in a PAC-3 variant and upgraded previously received systems. Nowadays, the Patriot system is the most common lower-tier, surface-to-air guided air and missile system capable to destroy aerodynamic targets (combat aircraft and helicopters) as well as short-range ballistic missiles. The Patriot PAC-3 system battery consists of the ANM-PQ-65 radar, AN/MSQ-104 engagement control station, battery command station, antenna mast group and M902 launchers. A single Patriot battery is capable to intercept ballistic missiles in a range of 15-20 km. In July 2016, Taiwan conducted a test of PAC-3 missiles at White Sands Missile Range in the United States.

The Tien Kung system was designed and developed by the National Chung-Shan Institute of Science and Technology in the 1980s. In 1996, the Tien Kung system officially replaced the Nike Hercules system batteries. Tien Kung is based on previous variants of the Patriot system and it was developed in two variants: Tien Kung-I and more advanced Tien Kung-II. The Tien Kung-I missile is a single-stage, solid-fuel rocket with a range of approximately 100 km, it can be launched from both underground missile silo and mobile launchers. Tien Kung-II is a two-stage missile with a range of 200 km (length: 9.1m; weight: 1,100 kg; warhead: 90 kg).

According to the initial information regarding the system’s specification, Tien Kung should be able to intercept and destroy ballistic missiles, however, its capabilities against this type of targets are probably quite limitedIII.

Taiwan acquired the first Hawk systems in the 1960s and there are still several batteries in service to date, which are deployed along the west coast of the island. The system is designed to intercept aerodynamic targets, however, it can also be used against cruise missiles. The lowest tier of anti-aircraft defence involves systems such as Chaparral equipped with AIM-9 Sidewinder, Avenger with Stinger missiles, as well as the Skyguard system with RIM-7M Sparrow missiles.

The United States approved the sale of the early warning radar system to Taiwan in 2000. In 2005, the American Raytheon company obtained the contract worth $800 million to build the AN/FPS-115 Pave Paws radar in Leshan. Despite significant cost overruns, the radar was launched in December 2012. According to the available data, the ultra high frequency (UHF) radar is able to track simultaneously up to 1000 targets, such as ballistic and cruise missiles, unmanned aerial vehicles, as well as the aircraft. The radar is supported by the C4 (Command, Control, Communications, and Computers) Po Sheng system, which was built in cooperation with the United States.

Taiwan continues developing its national anti-aircraft defence systems with the Tien Kung-III programme. The new system is supposed to replace the I-Hawk system and be integrated with the Pave Paws early warning radar and batteries of the Patriot system. The armed forces of Taiwan designate the Tien Kung-III system as ‘an advanced, long-range air defence system’ capable to intercept targets at different altitudes. The missile has an estimated range of approximately 20 km against ballistic missiles and 200 km against aerodynamic targets. The missile carries continuous-rod warhead, therefore, it does not destroy a target through kinetic energy (hit-to-kill). In comparison to the previous version of the system, Tien Kung-III has advanced capabilities of intercepting targets with a low radar cross-section (RCS), such as tactical ballistic missiles. The Chang Shan radar has been significantly improved in order to detect and track ballistic and cruise missiles with a low RCSIV.

It is worth emphasising that security of Taiwan is based on both defensive and offensive capabilities. The Armed Forces of Taiwan are developing modern deterrent systems, e.g. Hsiung Feng II-E (HF-2-E) cruise missile (range of 1000 km), Hsiung Feng III (HF-3) supersonic missile and Yun Feng (YF) ballistic missile with an effective range of 1200-2000 km. These weapon systems could be used to launch a retaliatory attack on economic centres located on the coast of China (including Shanghai), which certainly increase costs of a potential attack from Beijing’s perspectiveV.

Battle for Mosul – what is next for Iraq and the Islamic State?