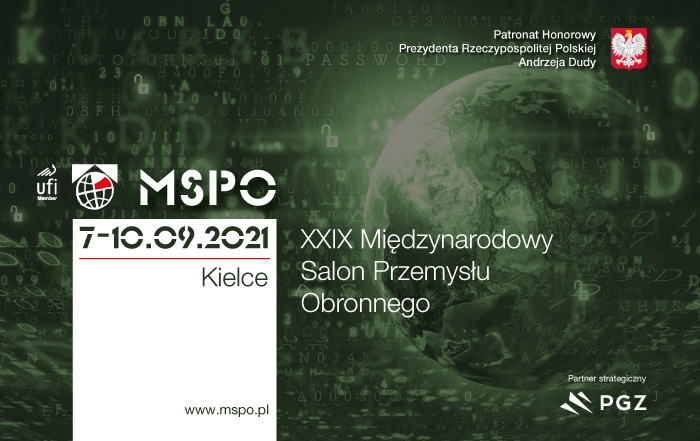 For 29 years, the September International Defence Industry Exhibition has been the presentation arena for defence industry companies from all corners of the world.    The 2020’s expo was held during the COVID-19 pandemic, which serves as further proof that Targi Kielce – the business meeting place plays an invaluable role. Such a platform is in great demand even in times of crisis.

Not only is MSPO a comprehensive presentation of military equipment, but it also abounds with business meetings and contracts concluded between manufacturers from different continents and the defence sector bodies. MSPO is ranked third among all Europe’s exhibition, after the Paris and London trade shows. The upcoming MSPO is held from 7 to 10 September 2021.  The Polish Armaments Group is MSPO’s Strategic Partner. MSPO  has been granted the Honorary Patronage of the President of the Republic of Poland Andrzej Duda.

It is worth recalling the undoubted success of MSPO 2020;  the trade show was organised with strict observance of sanitary rules and regulations and brought together 185 companies from 15 countries. 2020 MSPO was the showcase for the elite of rocket weapons manufacturers – from US Raytheon and Lockheed Martin to the British MBDA European Missile House. The three days’ exhibition attracted several thousand visitors.  HE Jeremy Quin, the UK Minister for Defence Procurement, UK, the head of the British delegation and MSPO 2020 Lead Nation Exhibition best recapitulated the trade show. This is how the guests of honour referred to the expo facts and figures in his speech at the commencement ceremony: “Can I say what a real privilege is speaking today.    In the UK, we are always impressed by the resilience and the determination of the Polish people.   Examples of that resilience and determination occur again and again in the long history of the nation.   It is, therefore, no surprise, even with all the challenges that the world is currently facing, Poland has laid on a first-rate trade show today.   We may be lower on numbers we would normally expect,  but looking around the halls earlier today, and hearing through the mikes – with all of you in the seats.   We may be lower on numbers, we are certainly high on quality.”

The International Defence Industry Exhibition 2020 was complemented and enhanced with problem-focused and knowledge-dissemination meetings – the nationwide scientific conference on “The defence industry activities which benefit the state’s critical and defence infrastructure” organised by the academic milieus as well as the Lead Nation seminar “”The United Kingdom & Poland – Let’s Build Together: Strengthening Industrial Cooperation to Develop World-class Capabilities”.

The International Defence Industry Exhibition’s long tradition is to witness agreements conclusions, contracts signing ceremonies. 2020’s expo was not different.  The expo stand of the Polish Armaments Group was the stage for the official agreement signing between  Huta Stalowa Wola [Steelworks] SA and the Czech company Tatra Export. The ceremony was held on the first expo day.  The contract stipulates the design and delivery of a 4×4 vehicle with complete technical documentation which makes it possible to produce the vehicle in Poland. The agreement concerns the 4×4 vehicle version.  This vehicle will be offered for the Polish Armed Forces’ programs and projects the Polish Armaments Group is a part of.  Ultimately, the vehicle has been acquired in order to expand the range of chassis for command vehicles and other specialised bodies requiring the use of an advanced 4×4 chassis such as the Rocket and Artillery Forces.

Seminar: International programs in the aviation sector as a source of innovation and economic development