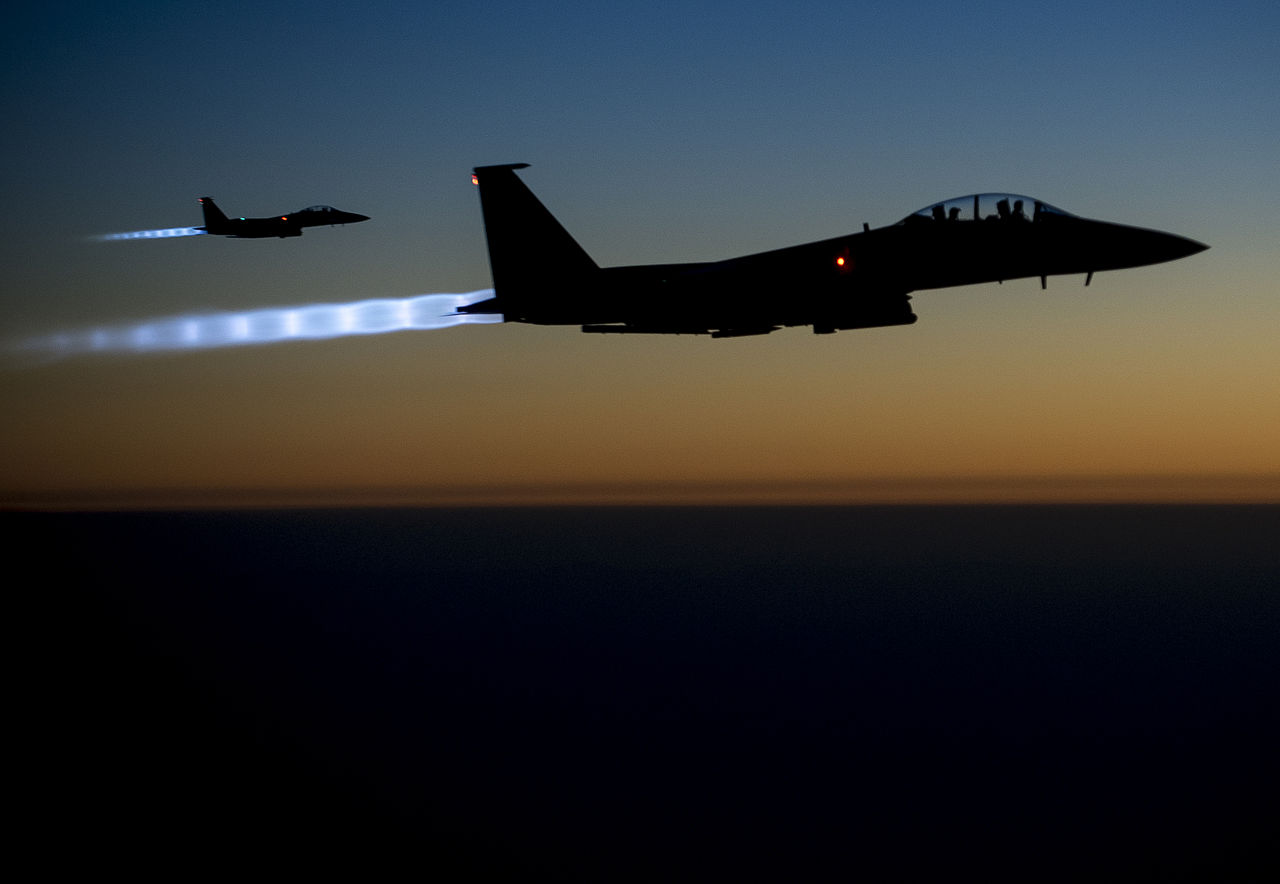 New strategy in the fight against ISIS – What role for Poland?

On January 12 2016, U.S. President Barack Obama, in his final State of the Union address, outlined a more aggressive plan to combat the so-called Islamic State (ISIS). A few days earlier (6 January 2016), President Obama introduced the long-awaited strategy for the fight against ISIS. Meanwhile the Pentagon unveiled its plans for the operations: American soldiers would not be limited officially only to Iraq. U.S. involvement would continue to involve Special Forces and the training of Iraqi troops. However, President Obama urged Congress in his address to agree to the use of regular troops. In addition, sources at the Pentagon admitted that U.S. Special Forces would carry out the most difficult combat operations.

The new strategy in the fight against ISIS

The Pentagon’s plans consist primarily in taking control over ISIS’s key centres of power, including coordinated attacks on Mosul (the capital of ISIS in Iraq) and in the longer term, Al-Raqqah (the capital of the Islamic State). This is a fundamental change in U.S. policy since Washington has thus far ruled out any involvement of U.S. troops in Syria, and yet is now allowing for the possibility of moving its main military effort there. This offensive intends to include the U.S. special forces, Iraqi government forces, and the Kurdish Peshmerga in the north. On the Syrian side, American troops are to be assisting in the attack on Al-Raqqah by the so-called ‘moderate’ Syrian forces. At the same time, Turkey would seal the border with Syria and Iraq. At the end of February 2016 Americans would support the current forces with an additional 500 soldiers from the 101st Airborne Brigade, and a further 1,300 troops will be sent in late spring to form the so-called BCT (Brigade Combat Team). When presenting the strategy against ISIS, the U.S. president also urged NATO allies to participate in the offensive, at first mentioning France, Germany and Britain, but also calling for a wider response from other members of the Alliance. Obama also clearly stated that the countries of the region must work together with the West, if the Middle East is to be stabilized. A day after Obama’s address, U.S. Secretary of Defense Ash Carter stressed that the U.S. did not want to ‘Americanize’ the conflict to avoid possible accusations that the West is occupying Iraq or Syria.

In his strategic concept of the fight against ISIS, Obama did not consider the Kremlin’s role as a partner (instead he stated that the coalition’s actions would enable ‘countries like Russia’ to focus on the fight against ISIS). In other words, the U.S. president expressed his disapproval of the actions of the Kremlin directed against the Free Syrian Army. At the same time, it is a signal that there will be no official coalition with Russia on the Syrian issue and the fight against ISIS. Obama and Ash did not address the role of the president of Syria in any of the points of their strategies. Although they abandoned any rhetoric concerning the necessary departure of Bashar al-Assad, nor was cooperation with him in combatting ISIS officially accepted. What was meaningful, though, was the statement made by the Secretary of Defense that the U.S. would support the Iraqi and Syrian forces in the fight against ISIS. This may signify a readiness to cooperate informally with the forces of al-Assad. This all goes to show that the so-called Islamic State has become the main target of the operation supported by the West. This strategic change of Obama’s administration may result from the election calendar in the U.S. The U.S. president will want an essential part of the operation against the IS to finish before the elections, which would contribute to improving the assessment of his presidency, and would serve as a powerful driving factor for the Democrats. So if a major effort is scheduled for the summer period, then the end of the military part of the operation might be planned for the end of 2016. In such a scenario, however, a question arises about the fate of the Sunni population in that region, which is the real issue of stabilizing the situation and not only propaganda activities aimed to bring about temporary results.

Poland’s participation so far in the missions in Afghanistan and Iraq has resulted from political calculations of Polish authorities (Poland as a new member of NATO wanted to ensure its reputation as a reliable ally). However, while intervention in Afghanistan after the attacks of September 11, 2001 was initiated on the basis of a UN mandate, the Iraqi conflict had no such international legitimacy, and the evidence on which Washington convinced allies to join the operation turned out to be fabricated. This situation has raised understandable reluctance of Polish society to re-engage militarily, not only in Iraq, but in general in the Middle East. The question then arises about the sense of Poland’s joining in the international coalition against the IS.

Considering the participation of Poland in the coalition against ISIS, the character of the current plan of operations is different now from the operations in 2003 in Iraq (at present even the idea of overthrowing the dictator in Syria has, at least officially, been taken off the agenda). Unlike the Polish involvement in the Iraqi conflict in 2003, this time the main European players are members of the coalition, so Poland’s participation in this conflict would not have negative consequences for its relations with key countries of the EU. Whereas for Russia Poland’s involvement would pose a certain impediment in Russia’s ability to further meddle in the European Union. Poland as a respected ally of the U.S. and Western countries would gain a much more important position internationally not only with respect to the issues directly concerning its own neighbourhood, but as a partner in solving global problems. This should not contribute to the growing threat from Russia, because there would be no direct threat to its interests. At the same time Poland’s participation in the anti-terrorist operation would give it better opportunities to negotiate issues related to further strengthening of the eastern flank of NATO, which is now a priority for Polish diplomacy.

It is worth remembering that Poland cannot isolate itself from the problems of its NATO allies, while waiting for support against the threat from Russia. Less than half a year before the NATO Summit in Warsaw (8-9 July 2016) Poland needs to develop a position on all key issues of the Alliance. The NATO summit in Poland, the growing importance in the global economy and international politics are the determinants indicating that Poland’s voice should not be limited only to the issue of internal security and the war in Ukraine. Contrary to the opinions of some commentators, Poland’s voice is also listened to in the U.S. If Poland still wants to aspire to the role of a regional leader, it should be more involved in resolving key international problems. Poland as a member of the two major military operations in Afghanistan and Iraq, but also a participant of the UN mission, including Syria, Lebanon and the Sinai, with its unique and rich historical experience, could become an important player and part of the solution to the crisis in the Middle East. In such a situation, Poland joining the operation, even with small resources, and publicizing its participation as a coalition partner in the fight against terrorism, may significantly strengthen its role and importance in the Alliance. Moreover, the situation that takes place in Syria and Iraq is also a threat for Poland. This is reflected in the growing threat of terrorism in Europe, and new immigration crises. Both these issues, without a solution to the crisis in the Middle East, would increasingly affect Poland. If Poland decided to join the operation against ISIS, it would be good if its participation were not limited to the use of, for instance, GROM on the battlefield, but Polish officers could also take part in planning and strategic tasks. Also, a contingent training Iraqi forces would be of great importance in the context of strengthening Poland’s military relations with the U.S. and its role in NATO. It would also constitute a valuable experience for our officers. An example of such commitment in the fight against terrorism does not have to be operations with great participation of the Polish Armed Forces, but e.g. operations in Mali and the Central African Republic, where the Polish contingent supporting the French army was limited to one aircraft C-130 Hercules with support (CAR) and 20 soldiers to train local military forces (Mali). Of course, in the case of operations in Iraq and Syria, the number of means of transport, as well as the number of instructors would have to be multiplied. There is also the opportunity to engage in missions of observation and reconnaissance with the use of F-16 aircraft. Although Germany has already signed up for this task, certainly the scope of operations requires the participation of a greater number of aircraft. Cooperation with the Luftwaffe would also give a whole new meaning to Poland’s commitment to working with NATO, showing the modern face of the Polish Armed Forces.

An important argument against involvement in the fight against terrorism in the Middle East is the lack of public support for Polish participation in such operations. A number of surveys were conducted regarding Poland’s possible involvement in the conflict in Libya in 2011, Syria in 2013 and about the presence of Polish troops in Iraq until 2011 or Afghanistan[1]. The conclusions are clear and prove the lack of public support for the Polish operations abroad. Without a broad and substantive information campaign this issue for certain would not change.

The most obvious threat coming from involvement in such an operation are possible attempts of retaliation by ISIS in Poland. Although the organization does not have as complex structures or logistics capabilities in Poland as in Western countries, it is still capable of carrying out an operation. Such a threat, however, would be greatly increased in the event of failure of the operation against ISIS – such a failure would cause further chaos in the Middle East, increasing anti-western, and anti-Polish, attitudes of the local population, and significantly intensifying the migration crisis.

The situation would also deteriorate if the operation were to be limited only to military activities. Limitation of action to a military strike could have negative consequences for Poland, because it is unlikely that it would solve the conflict, but rather complicate the situation in the region, and expose Poland to retaliatory actions from ISIS. The action plan against ISIS cannot be only temporary, calculated on the basis of such factors as what impact it might have on the U.S. president’s image or how it would improve the presidential chances of Democratic candidates. Such a situation would be a strong argument against engaging in this operation.