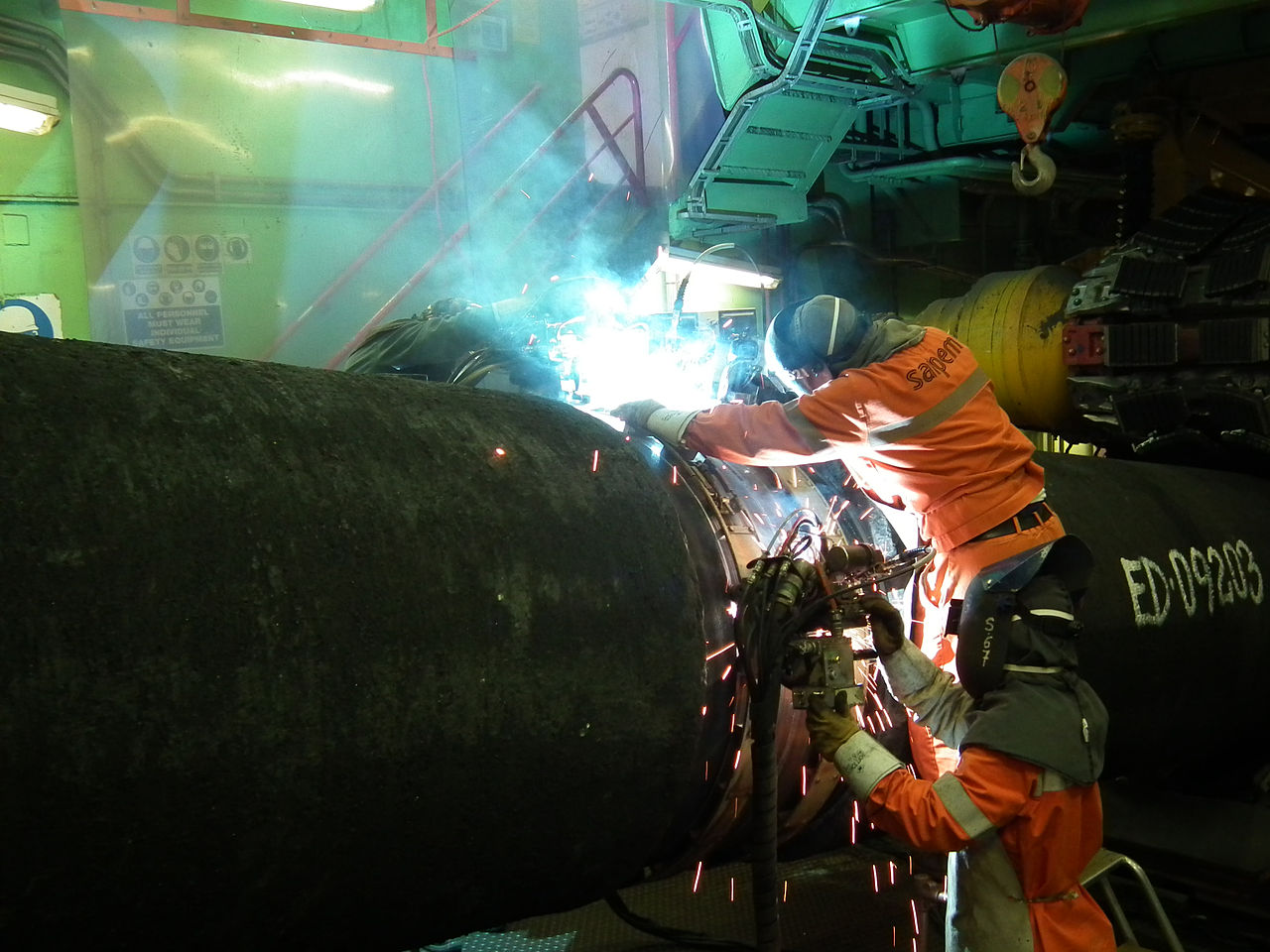 In September 2015, during the Eastern Economic Forum in Vladivostok, representatives of Russia’s Gazprom, along with Western companies E.ON, BASF-Wintershall, Royal Dutch Shell, OMV and Engi, signed an agreement to build a gas pipeline: Nord Stream II. The pipeline would consist of two lines, each with a transport capacity of 27.5 billion cubic meters per year. [1] The planned pipeline will transport Russian gas through the Baltic Sea to the European Union. The project aims to strengthen Russia’s position as a major supplier of energy to EU countries, and brings with it a great deal of economic and geopolitical consequences for Europe.

In Berlin in 2005, representatives of the governments of Germany and Russia signed an agreement on the construction of a gas pipeline linking the two countries. Nord Stream was to run through the Baltic Sea, and consist of two lines with a total capacity of 55 billion cubic meters (each line 27.5 billion cubic meters). In 2006, the Russian state-owned Gazprom and the German companies BASF SE and E.ON signed a final agreement for the construction of the pipeline and the establishment of the Nord Stream consortium. In the following years Nederlandse Gasunie and the French company GDF Suez (now Engi) joined the project. [2]

Nord Stream raised many objections and controversies, both in Poland and in the European Union. Another pipeline exporting natural gas from Russia stood in opposition to the main objectives and directions of the energy policy of the EU. In the Green Paper Towards a European Strategy for the Security of Energy Supply from November 2000 the European Commission described the growing energy dependence on external suppliers as disturbing. It should be borne in mind that the concept of security of energy supplies is not always understood equally by each member state. For the countries of Western Europe, Nord Stream pipeline meant diversification of supply routes of Russian raw materials, and reduced their dependence on transit countries. In contrast, for the countries of Central and Eastern Europe the construction of the pipeline not only stood in opposition to the strategy of diversification of supplies, but actually increased energy dependence from one source, in this case Russia. The need to ensure sustainable development of the energy sector and an increase in competitiveness and security of energy supplies are both important requirements in the EU energy policy. Thus the question arose, whether in the face of the energy crises of 2006 and 2008/2009 Russia should continue to be recognized as a reliable supplier of energy to Europe.

The current energy strategy for the European Union is based on the Third Energy Package, which was adopted in 2009. It is a set of directives and regulations aiming to develop existing activities which will liberalize the energy and gas market in the European Union. The so-called principle of unbundling was introduced, i.e. the separation of transmission networks from generation and sale operations. Additionally, the package provides a clause (the so-called Gazprom clause) aiming to prevent the selling of the strategic network assets of EU companies. The national regulator of the energy market has the right to refuse to issue a license transmission to a company from a third country if it fails to meet the criteria of separation of network activities from trading, and if the entry of such an entity to the market would endanger the security of supply of EU member states. In the case of the Nord Stream pipeline, Gazprom obtained consent to be exempted from TPA provision (Third Party Access) for 50 per cent of its capacity.

Reactions of the member states to Nord Stream II

The European Union is facing a number of challenges in the field of energy policy. The ongoing changes taking place in the market of energy resources (price fluctuations, increased competition for access to strategic raw materials), the decrease in energy production within the EU and simultaneous need to boost economic growth, affect the basic principles of the EU’s energy strategy. It is natural, therefore, that the main objectives of this policy include the security of energy supplies, increase in competitiveness and sustainable development of the energy sector. A significant element is the diversification of sources and directions of energy supplies within the European Union. Paradoxically, this last requirement, in particular, highlights the conflict between individual national interests and the interests of the European community, and is subject to tensions within the EU.

Expansion of the Nord Stream has met with considerable opposition from some EU member states. Poland is one of the signatories of a letter sent to the European Commission in which the states of Central and Eastern Europe (except for Poland) – Lithuania, Latvia, Estonia, Slovakia, Hungary and Romania – presented the adverse effects resulting from the project. They included further isolation of Ukraine by limiting its role as a transit country, and consequently limiting the role of Poland and Slovakia in the EU gas sector.

The Nord Stream II project is a serious blow to the concept of the creation of the Energy Union, supported by Poland. The framework of the project was developed at the summit of the European Council on 19 March 2015. It was agreed that the EU Energy Union would be based on five overlapping dimensions, namely solidarity and trust, energy security, a fully integrated European energy market, de-carbonization of the economy and research, competitiveness and innovation. The need to intensify work on infrastructure projects in electricity and natural gas was underlined, taking into account connecting gas pipeline systems. Moreover, it is necessary to fully implement and enforce the existing legislation in the area of energy, and to make contracts with external suppliers for the purchase of gas in accordance with the EU laws.

It is worth mentioning that the European Commission in its Communication to the European Parliament and the Council of the European Union from July 2014 recommended that ‘new infrastructure investments backed by dominant suppliers must comply with all rules of the internal market and competition. In particular, the South Stream project should be suspended until full compliance with EU law and re-evaluation in the context of EU priorities in the field of energy security has been ensured’. The project was incompatible with the principle of unbundling, i.e. the separation of supply from transmission activities. Meanwhile, Gazprom was to be both a supplier and a co-owner of the pipeline. The same document indicated that the decision to support strategic infrastructure projects must be consulted at the European and/or regional level. In this way, decisions taken by one member state would not endanger security of supply to other countries.

After the European Commission suspended the project to build the South Stream pipeline in 2014, Italy joined the group of countries who opposed the new pipeline, accusing the EC of double standards. Recently, there were reports saying that Italy would take part in the construction of the Nord Stream II. The country currently faces problems with unstable supplies from North African countries, e.g. war-torn Libya, which meets around 10 per cent of Italian demand for natural gas. In addition, the unstable situation in Ukraine and the consequent uncertainty regarding the security of supply through this country might result in making the prospect of building connections to the Nord Stream become profitable. Another country that had vested interests in the South Stream was Bulgaria. However, it does not intend to take actions against the Nord Stream II. In addition, the Bulgarian Prime Minister Boyko Borisova announced Bulgaria’s intention to create a center of gas distribution, which does not exclude integration with Nord Stream II. Finland, Sweden and Denmark, whose territorial waters will be areas where the next leg of the pipeline will run, have not expressed objections to the expansion of Nord Stream. The countries of southern Europe and the Balkan states also have not expressed any formal objections to the project, but the failure of the South Stream and the interruption of negotiations on the Turkish Stream gas pipeline make these countries more and more interested in the expansion of cross-border connections.

[1] The newly established company New European Pipeline AG will be responsible for the implementation of the project. Pursuant to the provisions of the document, Gazprom will own a controlling stake (51 per cent), BASF-Wintershall, E.ON, Shell and OMV will receive 10 per cent of stakes in the company, while Engi 9 per cent.

[2] Gazprom holds the controlling stake in Nord Stream (51 per cent stake). Two German companies BASF SE / Wintershall Holding GmbH and E.ON Ruhrgas AG hold quite a strong position, each with 15.5 per cent. Other shareholders Nederlandse Gasunie and GDF Suez have a 9 per cent stake each.

Author: Monika Zborowska, analyst of the ‘Economy and Energy’ program of the Casimir Pulaski Foundation