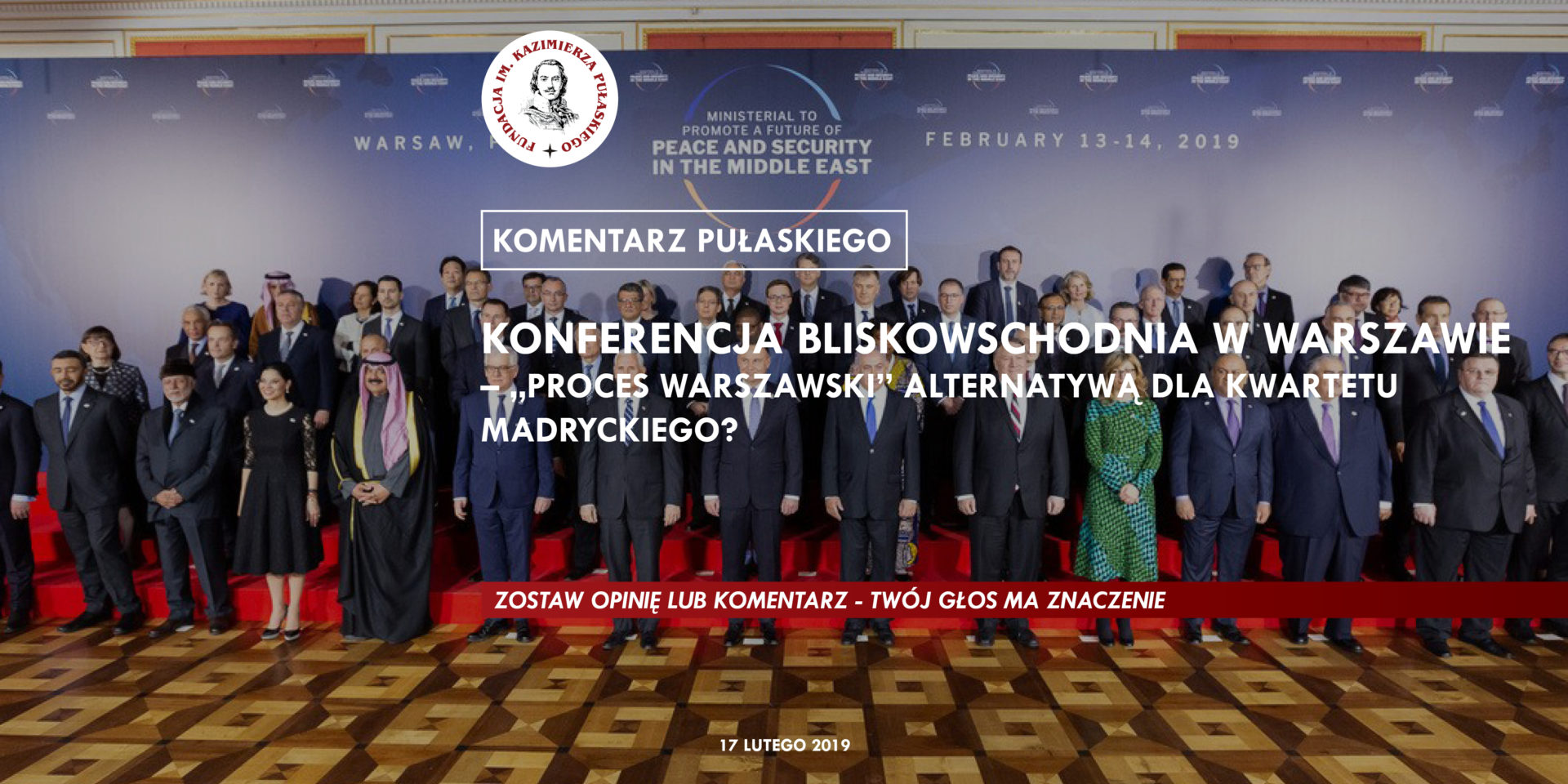 This year, between February 13th and 14th, delegations of sixty-two countries met in Warsaw to debate on the subject of security in the Middle East. This ministerial conference ended with arousing various emotions and left the most important questions about the situation in the Middle East unanswered.

According to the post-conference statement of its co-organisers – that is the Minister of Foreign Affairs of the Republic of Poland, Jacek Czaputowicz and the US Secretary of State, Mike Pompeo – the conference was devoted to building peace and security in the Middle East. They have also emphasised the broad and active participation of many delegates. According to the organizers, this confirmed the involvement of the international community in combating instability in the region of the Persian Gulf. Officially, Warsaw conference resulted in creation of a new, international initiative to build a better future for the Middle East. International community – according to declarations – wants to intensify efforts for peace and security through the establishment of seven working groups in order to work on development of specific solutions. At the same time, Poland and the United States stated that the participants of this conference should meet again in the future, to discuss progress made by the working groups. Thus, the organizers of the conference expressed their desire to formulate a new format for discussion about the Middle East (called the “Warsaw process”). It seems to be an attempt to change the current format of international discussion, called the Madrid Quartet (including the UN, USA, EU and Russia), which – due to the conflicting interests of its members – actually ceased to exist.

Except for an attempt to create a new formula for discussing the security and stability of the Middle East, the ministerial conference in Warsaw has not resulted in any concrete ideas for solving the difficult situation in the region. Unfortunately, the conference did not specify a coherent policy of resolving the conflicts between Israel and Palestine; official government in Yemen and opposing Houthi forces; Saudi Arabia and Qatar; or the war in Syria. Due to the lack of representatives of Palestine and the Houthi Movement, the distance in Saudi-Qatar relations as well as the absence of the Russian delegation all talks on these conflicts were very one-sided and fruitless.

An Israeli-Arab rapprochement was also one of the indirect aims of the conference. It was supposed to be driven by the threat of an aggressive policy of Tehran. However, despite handshakes and diplomatic formulas, full agreement of these parties is not possible due to the Palestine case – which is still the main element conflicting  these parties. American side upheld the announcement of withdrawal from Syria, without addressing the subject of the planned Turkish aggression on (mostly Kurdish) Syrian Democratic Forces (SDF). In addition, Tehran’s predictions proved to be a fact. Despite attempts – made by Polish diplomats – to alleviate the aggressive rhetoric of the US and Israel, the conference adopted a distinctly anti-Iranian character. Iran’s regional activity aimed at expanding its sphere of influence in the region of Middle East, causes concerns of the US and its allies. Currently, Tehran has a strong influence on Iraq and Syria, as well as “proxy” groups operating in Yemen, Lebanon and Gaza. In recent months Tehran has also been making efforts to bring Azerbaijan into its sphere of influence.

Official statements of the Polish Ministry of Foreign Affairs, unambiguously consider the conference as a success. As an organiser, Poland provided security, convenient conditions and a meeting place for over sixty delegations from around the world. This is worth considering as a success. However – in the political context – it should be clearly stated that the role of Poland as a co-organizer of the Warsaw conference has been overshadowed by the Israeli Prime Minister – Benjamin Netanyahu – who tried to dominate the conference through extremely aggressive rhetoric against Iran (which was also followed by the US delegation). It is possible that he was implementing his own policy aimed at gaining support for the upcoming parliamentary elections, In terms of Polish-American or Polish-Israeli relations, one can certainly observe the continuation of pro-American policy and the attempt to bring Warsaw and Tel Aviv closer together. The conference also confirms strong Atlantic orientation of Polish foreign policy. Unfortunately, the plan of Polish Ministry of Foreign Affairs ­­­– according to which Poland was to become a mediator between the EU and the US – failed. It was not possible to bring political concepts of the US and EU diplomats to a one common point. Lack of high-level delegates from France and Germany confirms the continuing dispute between the EU and the US caused by the US withdrawal from the nuclear deal with Iran (JCPOA).

Foreign Ministry of Iran defines the Warsaw conference and its final statement as a fiasco of the US diplomacy. While recognising it as an attempt to create an anti-Iranian coalition, spokesman of the Iranian Ministry of Foreign Affairs, Bahram Ghassemi underlined the small number and low rank of diplomas visiting Warsaw. Thus, he noticed the absence of representatives of Iraq, Lebanon, Turkey, Syria, Palestine and Iran, without whom one cannot decide on the future of the Middle East. The final statement itself, has been considered by Tehran as a document with no real meaning or value. It is also worth noting, that the Iranian Foreign Ministry does not perceive Warsaw as an independent entity deciding on the organisation of the Middle East conference. This is evidenced by the lack of direct reference to Poland in the Iranian Foreign Ministry’s statements. It seems that despite the obvious cooling of relations between Warsaw and Tehran, Iranian pragmatism will win and there will be no break in economic ties. Iran, in the face of sanctions and complicated economic situation cannot afford any additional economic losses.

In the context of the Warsaw conference, the Sochi summit organised by Russia also must be mentioned. Meeting of heads of states such as Turkey, Russia and Iran is being perceived as a clear signal symbolising opposition to the US policy in the Middle East. Turkey’s participation in a clearly anti-American undertaking – which is an another act that deepens the differences between these countries – is very significant and interesting.

Warsaw ministerial conference on the Middle East should be analysed and evaluated in a tier-wise manner. For the American administration it was an attempt to build a new format of discussion on the future of the Middle East. This initiative (named the Warsaw process) will be able to be evaluated only after some time – based on its development and possible effects. The Iranian government known for its fierce rhetoric, responded to the Polish-American initiative in a typical tone. In addition, the tensions between the US and the Iran has been respectively increased by: the terrorist attack that occurred in the Iranian province of Sistan and Baluchistan (as a result of which 41 people died), a region bordering with Afghanistan and Pakistan (for which the west was blamed),  and the accusation – made by the US government – of a former US counterintelligence agent (Monica Witt) of spying for Iran. However, it seems that the conference will not bring specific actions of Tehran aimed directly at Poland. For the Polish government, from an organisational perspective, the conference can be considered as a success. However, the controversy associated with it might negatively affect its perception by public opinion in Poland.