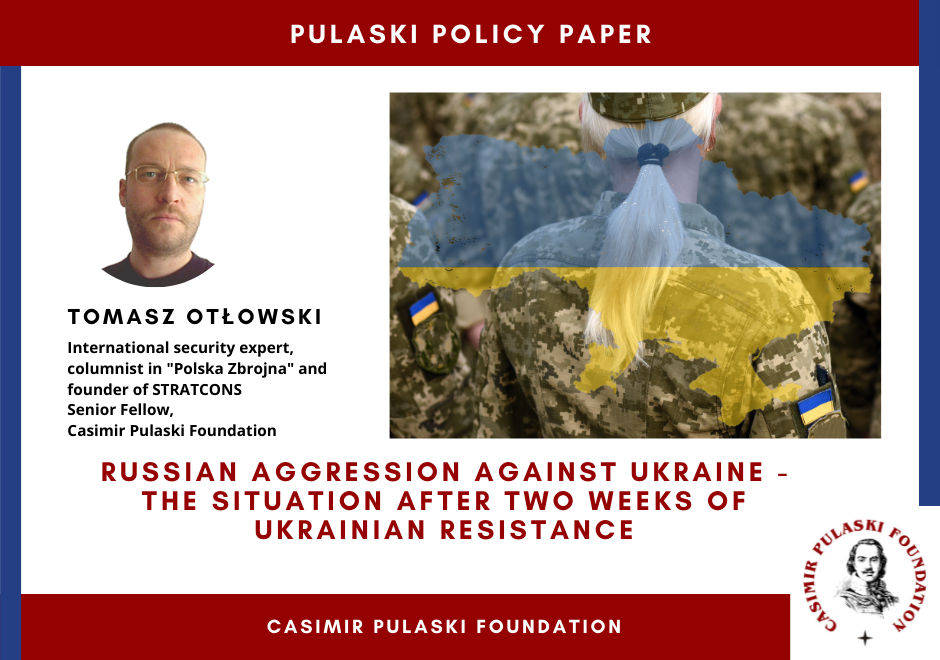 The “Special Operation” of the Armed Forces of the Russian Federation in Ukraine was to be (according to the original assumptions of the Russian political and military authorities), a short and rapid military campaign, carried out without major problems and significant resistance on the part of the Ukrainians. The main objectives of this operation – i.e. the phased occupation of Ukrainian territory, the disruption/disarmament of Ukraine’s armed forces, and the dissolution of its political authorities at all levels of government and local administration – were to be achieved within 10 to15 days. Kiev itself, the capital of Ukraine, was to be fully contained and “secured” by the end of the second day of the operation at the latest (i.e. the evening of February 26).

The reality turned out to be quite different. Within two weeks from the start of this conflict, the Russians have not even managed to achieve the objectives envisaged for the first two-three days of the operation. Russia’s blietzkrieg in Ukraine has turned into a bloody war of attrition the likes of which Europe has not seen for 80 years.

The heroic and highly effective resistance of the Ukrainians, both military and civilian, proved to be the decisive factor in thwarting the invaders’ original plans. Equally important, however, were the elements on the Russian side which proved to be completely surprising and impossible to foresee beforehand. These include, above all:

The course of military operations so far has also vividly confirmed earlier assessments by Western experts that the Achilles’ heel of Russian combat groups is still logistics (and in many cases an actual lack any logistics at all).

Equally surprising is the inability of the Russian Air Force to gain full and unequivocal control of the air in Ukraine, despite having a crushing outnumbering of its forces and resources. As a result, after two weeks of conflict, there are still some operational Ukrainian air defence units operating freely in the West as well as some active military aviation units that sporadically perform combat tasks. At the same time, the Russians’ failure to exercise complete control over the airspace is yet another reason for their limited progress on the front.

As a result of the coexistence of these elements, the Russian offensive on almost all operational directions has lost its momentum as early as on the third or fourth day of the war. A noticeable exception was the southern front (Crimean direction), where the Russian units (clearly the best motivated and the most competently commanded, as well as those with more efficient logistics services) continued to carry out combat tasks for several more days. However eventually, around day 10 of the war, the tempo of operations radically decreased even there.

As a result, after two weeks of war – which is already proving to be Russia’s bloodiest and most costly military campaign after World War II (in terms of equipment loses) – Russian forces have captured only scraps of Ukrainian territory. The Russians made the most progress in southern Ukraine, where forces operating from Crimea captured Melitopol and Kherson (the first and so far only regional capital captured in the operation), and besieged Mariupol and Nikolaev.

In the north and northeast of Ukraine, the Russians were only able to approach the outskirts of Kiev from the northwest; it was not until the 13th day of the war that the spearheads of their strike force crossed the Kiev-Zytomyr highway, effectively cutting off the Ukrainian capital from the west. Also to the east and northeast, Kiev is effectively repelling the actions of enemy forces, operating with combined engagements of several (2-3) battalion tactical groups (BTGs). North of the capital, encircled Chernihiv continues to defend itself, effectively tying down significant enemy forces there. In the east of the country, particularly around Kharkiv, the aggressors not only failed to make significant advances during the second week of the war, but were actually forced to shorten their front and retreat under the pressure of several effective counter-attacks by Ukrainian forces led from the north and east of the city. The entire west of Ukraine is still completely free of kinetic ground operations, allowing for the smooth delivery from abroad of not only military material and equipment support, but also humanitarian aid to civilians in bombed Ukrainian cities.

In these unexpected new operational realities, Russian mid-level commanders show a total lack of flexibility, ability to adapt their actions to changed circumstances, and minimal initiative. This is all the more strange because the reform of the system of command and training of senior officers and commanders of combat units from the battalion level up, which has been implemented in Russia for several years now, envisaged making the command system more flexible and bringing it closer to the standards existing in Western armies, among other things, by giving commanders of individual tactical units more independence and initiative in actions in combat conditions. As can be seen, the reform has not yet changed the habits of Russian commanders.

In the absence of progress on the front, Russian forces have begun to use large-scale tactics of terrorising civilians through artillery and rocket fire as well as aerial bombardment. The destruction of civilian infrastructure of cities and the resulting casualties among the population are intended to break the morale and will to fight of Ukrainians. This type of action was also used by the Russians during the wars in Chechnya and their actions in Syria.

1. Overall, after two weeks of combat operations, Russian forces are still far from achieving an operational breakthrough on any section of the front. Putting aside the incompetence and morale problems of the Russian forces, the success of the Ukrainian defensive strategy also lies in the extremely skillful use of geographic, terrain, and atmospheric factors favourable to the defenders. The rise in air temperature in northern Ukraine in late February and the thaw it caused meant that Russian mechanised columns could only move on roads and highways, making the directions of their crossings/attacks predictable and facilitating the defenders’ ability to organise ambushes. Moreover, the Ukrainians have been using their military potential extremely skilfully and prudently. In areas formally occupied by the Russians (particularly in the north and east of the country), Ukrainian paramilitary formations – the Territorial Defence Units and local civilian self-defence units – are beginning to play an increasingly important role.

2. The low level of training of Russian soldiers and officers, especially in ground forces, as well as the terrible state of the communications, command and supply systems, shed a whole new light on the overall condition of the Russian Armed Forces. Russia has turned out to be much weaker militarily than it was commonly believed in the West to date. This does not mean, however, that the outcome of this campaign is a foregone conclusion, but certainly the attitude, training and combat capability of the Russian ground forces and their equipment must be re-examined in detail.

3. According to Western estimates, the Russians have already deployed between 95 and 99 percent of the total number of ground forces assigned to participate in the Ukrainian operation. There is no indication yet that the Kremlin plans to draw additional units from other parts of the country, which would be difficult given that the Russians are already using about two-thirds of their total ground forces in Ukraine. Perhaps this – along with horrendous casualties in personnel and equipment – is the reason Moscow is taking non-standard measures, such as recruiting fighters in Syria or probing the involvement of its Collective Security Treaty Organisation (CSTO) allies. However, the engagement of the Belarusian armed forces in Ukraine, which had been expected for over a week, has not materialised yet, possibly due to the reported problems with discipline and morale of the Belarusian units assigned to participate in the Ukrainian campaign.

4. Now, two weeks after the outbreak of war, the operation in Ukraine is becoming more evenly matched militarily, and increasingly frequent counter-attacks by Ukrainian forces (such as the one near Kharkiv on 7-8 March) are further disorganising Russian forces, inflicting on them significant losses in men and equipment. It is also clear that the operational weight of the entire war is increasingly shifting to the southern section of the theatre of operations. The Russian army units operating there appear to be the best trained and most competently commanded and, importantly, the most strongly motivated to act against the Ukrainians. It therefore appears that if the Russians have any chance of achieving a breakthrough in this war, it is in the south.

Author: Tomasz Otłowski, Senior Fellow at the Security and Defense Programme of the Casimir Pulaski Foundation

PULASKI POLICY PAPER: What if not the MiGs? Western options for military aid to Ukraine (Tomasz Smura)