The strengthening of the Casimir Pulaski Foundation's Management. 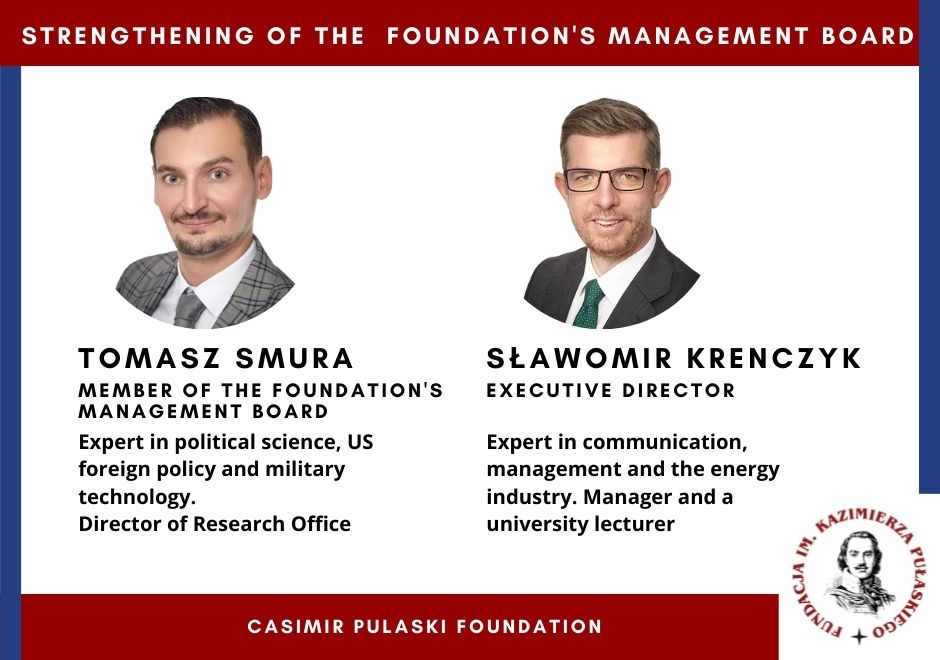 The strengthening of the Casimir Pulaski Foundation’s Management.

In the light of recent international events, effective as of March 2022 – Tomasz Smura (PhD) has been appointed a member of the Casimir Pulaski Foundation’s Management Board. Tomasz Smura will retain his responsibilities as chief analyst of the Foundation.

Additionally, as of March 1 Sławomir Krenczyk has been appointed Executive Director of the Foundation.

Tomasz Smura studied at the University of Nottingham, holds a PhD from the University of Warsaw and is a graduate of the Institute of International Relations at the University of Warsaw. His doctoral dissertation focused on the formation of the balance of power in East Asia. His main areas of expertise and research are: East Asia, US foreign policy and international security with an emphasis on its military aspect. He was awarded a scholarship from the Ministry of Foreign Affairs of Taiwan, he was the director of the Office of Strategy and International Cooperation in a state-owned company and completed multiple internships inter alia in the Department of Strategy and Planning of the Ministry of Foreign Affairs and in the Polish Institute of International Affairs.

Tomasz Smura has been a member of the Casimir Pulaski Foundation since 2014. He will combine the role of the Member of the Management Board with the responsibilities of the Director of Research Office.

Sławomir Krenczyk holds a MBA degree and is a graduate of law and postgraduate studies in communication. He began his career as a journalist and became a press spokesperson later on. He is an experienced mid and senior level manager who worked as an Executive Director in the public sector and served as Chairman of the Board in a corporate company. His areas of expertise include: communication, management and the energy sector. He cooperates with the organizers of congress events on climate neutrality and ESG. He also contributes as an advisor and an academic lecturer.