Warsaw Security Forum - a chance for constructive conclusions and analyzes after more than 200 days of Russian aggression against Ukraine. 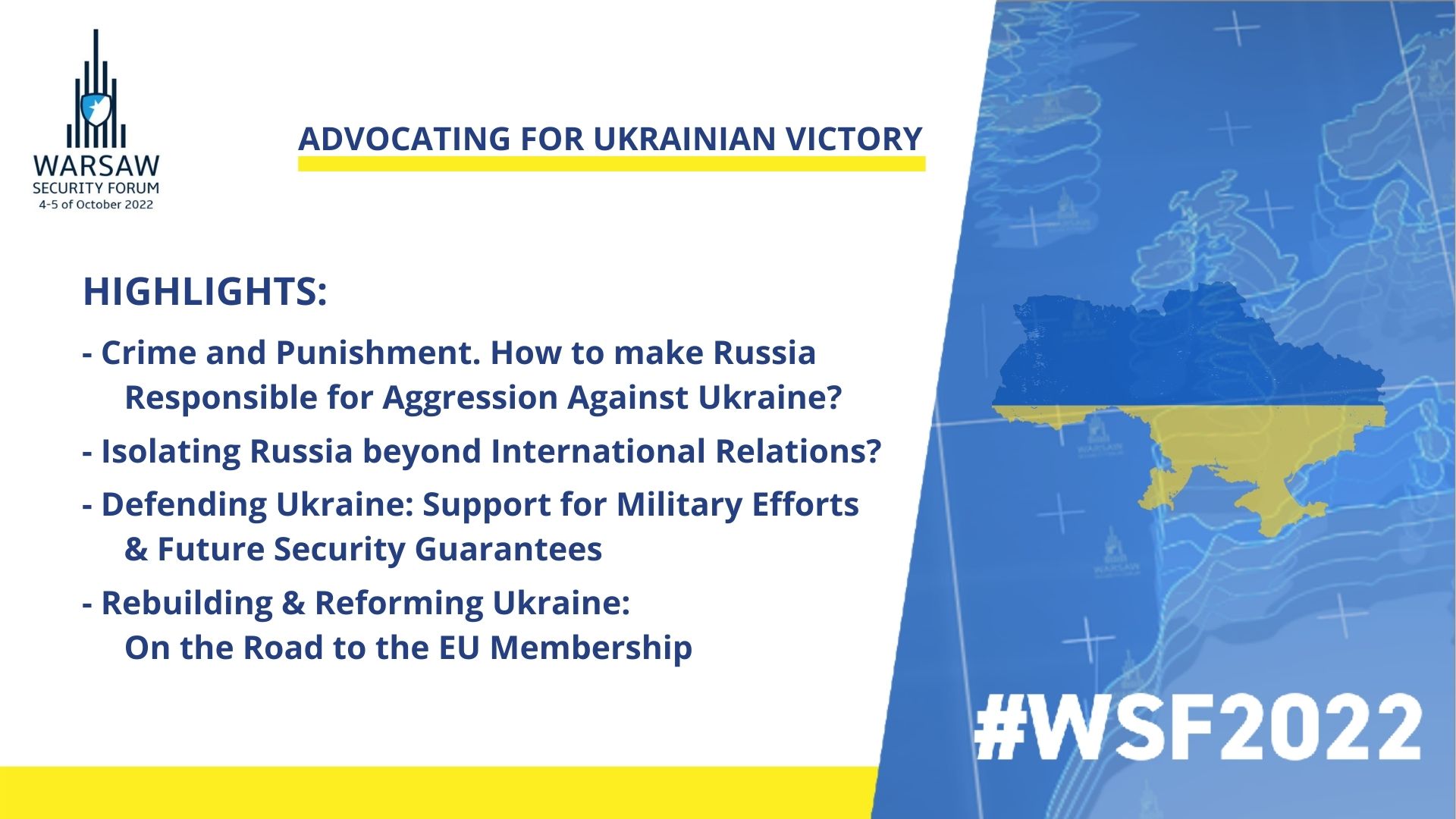 Warsaw Security Forum – a chance for constructive conclusions and analyzes after more than 200 days of Russian aggression against Ukraine.

200 days ago Russian troops invaded Ukraine. This open incursion into a sovereign territory of one of European countries shook Europe and drastically changed the foreign policy of the Euro-Atlantic zone. Since then, politicians, experts and ordinary people have been trying to make sense of the rapidly changing reality by analyzing the news coming from the front line.

Since 2014, the Casimir Pulaski Foundation is the host of the Warsaw Security Forum. The conference, organized this year for the ninth time, is a platform for analyzing current challenges for the geopolitical environment in the transatlantic area and serves to develop specific proposals and solutions to be applied by decision-makers in our Region. This year’s exchange of ideas between leading experts, politicians, soldiers and activists will take place in the context of Russia’s aggression against Ukraine and on the basis of the, already gained, Ukrainian lessons drawn from this conflict.

Organized on October 4-5, 2022, the Warsaw Security Forum will be an opportunity for representatives of state authorities, international organizations and non-governmental organizations to meet with their counterparts from Ukraine. It will be an excellent platform for direct talks and exchange of opinions on the main stage and in closed discussion formats. The main goal of the Forum is to find proposals and solutions that will support Kyiv in its fight against the aggressor and will a return of the rules-based international order.

The Casimir Pulaski Foundation is dealing with geopolitical and defense issues on a daily basis. In the first hours after the Russian troops invaded Ukraine, the Foundation started organizing support for the Ukrainian non-governmental sector.

A week later – on March 4, the International Center for Ukrainian Victory (ICUV) was established in Warsaw. Since then, it has been working tirelessly to support Ukraine’s military effort and its pursuit of international political and military structures. The activists of the Center advocate for international support of Ukraine’s fight against the aggressor and – being in constant contact with the representatives of the government – they relay the most urgent needs directly to foreign decision-makers. Meeting with the highest representatives of the government authorities (Boris Johnson, Anthony Blinken, representatives of the American Congress or the German Bundestag) they call for further sanctions against Russia and continue to inspire the international community to engage in support and post-war reconstruction of Ukraine.

In March, during Joe Biden’s visit to Warsaw, the Foundation together with the ICUV organized a demonstration in Warsaw, gathering over 4,000 people under the slogan: “Stop promising, start acting!” calling for increased sanctions against Moscow. In July, representatives of the Foundation paid a visit to Kiev, during which they held a series of talks with representatives of state and local authorities, announcing the opening of the Foundation’s office in the capital of Ukraine after the end of the war.

In addition to the organizational and substantive support for the Center, the Foundation constantly analyzes events and publishes analyzes devoted to various aspects of the war. The Pułaski Report, Pulaski Commentaries and the Pulaski Policy Papers describe military activities on the front line, social changes and the dynamic evolution of Euro-Atlantic relations. Moreover, the Foundation continues to organize webinars and conferences devoted to the changes taking place as a result of the war, while its experts are being invited for interviews in Polish and foreign media. Going beyond analytical activities, The Foundation organized a fundraiser aimed at supporting Ukrainian refugees residing in Poland and providing material support for people still residing in Ukraine.

Ukraine’s Way to the European Union – is There a Chance for a Success Story?