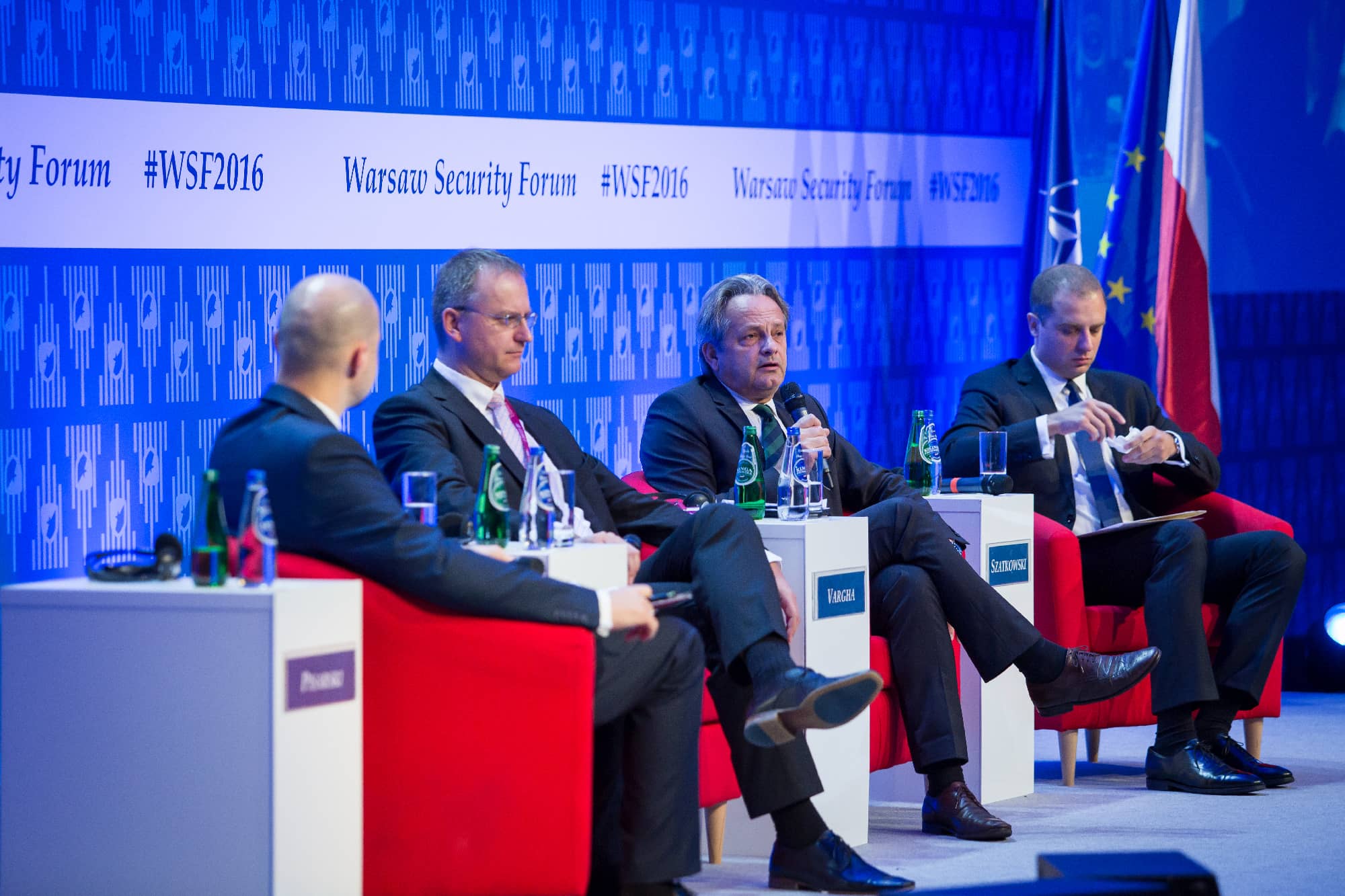 “We want the NATO to adapt toward 360° approach” – ministers of defence and of foreign affairs about the NATO and international security during the Warsaw Security Forum.

“Summit in Warsaw has brought a philosophical change in respect of how NATO perceives defence of its eastern flank” – said vice-minister of defence of the Republic of Poland Tomasz Szatkowski during the ministerial panel on the last day of the Warsaw Security Forum. “It’s a fundamental change of perception” – the minister added.  The panel was attended also by the vice-ministers of defence of Czech Republic Daniel Kostoval and Hungary Tamás Vargha.

During this year edition of the Warsaw Security Forum, one of the points of focus was   implementation of the decisions made on the NATO Warsaw Summit and adaptation of the Alliance to deal with such challenges as the aggressive policy of Moscow or fighting the so-called Islamic State. Minister Szatkowski has stressed the meaning of the Enhanced Forward Presence – the international fighting battalions that are going to be located on the rotary basis in the states of the Eastern Flank. “Defending the Eastern Flank is supposed to be based upon the existing military presence and the reinforcements” – the Undersecretary of the State in the Ministry of Defense has noted.

Minister Szatkowski also stressed Polish engagement and commitment to the strengthening of NATO’s southern flank. “We want NATO to adapt toward 360° approach” – noted the representative of the MoD in the context of the necessity of providing reaction by NATO to threats coming from all directions.

In turn, asked about the problem of solidarity within NATO frames, Hungarian Deputy Minister of Defense, Mr. Tamás Vargha, stated, that the “solidarity is the keyword not only within the North Atlantic Alliance, but also among the V4 states”. “We have to be able to respond to both threats from the east and the south, obviously from the Hungarian perspective the southern threats are more pressing (…), but solidarity means, that we cannot be blind on threats coming from other directions” – minister Vargha emphasized.

Czech Deputy Chief of the Ministry of Defence, Mr. Daniel Kostoval, responded, in turn, to the influence of possible political chances in the allied states in the context of NATO’s integrity. “I am optimist – after shifts of power, some processes accelerate; before elections everything is halted” – he noted. “After elections, American President will have larger mandate to demand form NATO member states development of new strategies” – he added. Representative of the Czech Republic also underlined the necessity of development of NATO’s new strategic concept, adequate to the new threats.

In the opening speech, the Head of the National Security Bureau Paweł Soloch emphasized the achievements of NATO in the field of security. „North Atlantic Treaty has strengthened the eastern flank, but also adapted to the threats from the South” – noticed Soloch. However, presidential minister stressed a still growing wide range of challenges, from violation of arms control mechanisms by Russia, by blended threats, to the conflict in Donbas. Undersecretary of State in the Ministry of Defense Wojciech Fałkowski also described Polish perception of the security environment. “The conflict in Crimea completely changed the strategic situation in Europe” – the Minister said. “However military force should be supported by effective diplomacy” – Fałkowski added.

Peter Jones pointed to the successes of NATO, such as the capable appointment of the Very High Readiness Joint Task Force (VJTF), but he stressed, that “there is still much to be done, especially in the aspect of national spending levels on defence”. Minister Ziółkowski noted, that “the most important decisions were made in July and we are currently at the military-technical stage of implementation”. “First soldiers of NATO’s forward presence will be dispatched by the beginning of next year” – he underlined.

Much attention during the WSF was devoted to Russia. „Russia is not a super-power, but a super-problem” – noticed Linas Linkevičius, Lithuanian Minister of Foreign Affairs, who took part in the WSF’s ministerial session. In this session, two other distinguish guests took part: chief of Romania’s diplomacy, Mr. Sebastian Dănuţ Neculăescu, and Czech Republic’s Deputy Minister for Foreign Relations, Mr. Ivan Jestřáb,. In the context of challenges posed by Russia, Linkevičius stressed the importance of international consultations. “Only through cooperation, continuous meetings, forums and conferences will we ever be able to combine our efforts, so that our actions will be effective” – he stated.

Another panel was devoted to Russia and its relations with the West. Daniel Fried, coordinator for sanctions in the US Department of State underlined that “sanctions imposed on Russia are only a tool.” The aim in this case is to protect the liberal order. “Russia challenges the liberal order in Europe we established in 1991, this is not only a territorial challenge, but also political one.” The chairman of the panel Damon Wilson from the Atlantic Council noted that “Putin does face troubles at home, so he needs an external enemy.” The panel was also attended by Ilya Ponomarev, a former member of the Russian Duma,  Zanda Kalnina-Lukaševica, Parliamentary Secretary in the Ministry of Foreign Affairs of Latvia and the expert on Russia Mark Galeotti.

Galeotti noted that “Putin is as strong as we let him be.” In his opinion, Putin wants to change the international order and is ready to use any means that it has. “Russia wants to be independent from international law and to have own sphere of influence” – expert said. Ilya Ponomarev, only one Russian MP who voted against annexation of Crimea said that the Putin’s goal is to re-establish the world order as it was between World War II and 1991.

On the other hand Ponomarev referred to the internal situation in Russia. “One thing what is Putin afraid of is his own surroundings” – Ponomarey said.

Deputy Prime Minister, Minister of Economic Development and Finance of the Republic of Poland Mateusz Morawiecki also attended the Warsaw Security Forum. „Nothing is more important for the state than ensuring the safety, because it starts everything else” – said Minister Morawiecki during Warsaw Security Forum. „We have a problem reconciling the interests in our family” – he added in the context of the growing contradictions between NATO and EU member states.

During the WSF opening speech Morawiecki singled out three main areas, which may become a threat for Poland. Firstly, he recognized the threat from the East, which is arising from the unstable situation in Ukraine and the increased military activity of the Russian Federation. As a second issue, he defined protection cybersecurity of Poland, ensuring that the Polish IT talents will be used in this purpose. The third area is the terrorist threat due to increased activity of so-called Islamic State. Morawiecki, referring to the statement of the German Minister of Finance Wolfgang Schäuble,  posed the question, why not, in the context of increasing threats, bet on a Common Defense Policy, which would be harmonized with NATO. According to Prime Minister Morawiecki this could be an interesting response to the growing threats in the context of dwindling resources.

Morawiecki participated also in the signing of a cooperation agreement between the Polish Arnaments Group and SAAB.

For the first time WSF agenda included defence industry part. “Reindustrialization is one of the priorities for the coming years” – stated Secretary of State of the Ministry of Development Jerzy Kwieciński during Security Beyond Horizon – the defense industry segment of the Warsaw Security Forum. “The defense industry was not treated with proper attention by the previous governments, but we are willing to change this situation” – the Minister added.

In the part dedicated to the industry, world’s biggest arms manufacturers were present and, among them – prime polish defence company – the Polish Armaments Group. Moreover, representatives of the Polish Ministry of Defence, presented current state of works on the (Polish) Strategic Defence Review and future of military  technology in Poland.

Warsaw Security Forum – large international conference organized by the Casimir Pulaski Foundation is an annual event on security of the European Union and NATO member states as well as relations of the West with Russia. The third edition of the conference was held on October 26-28.