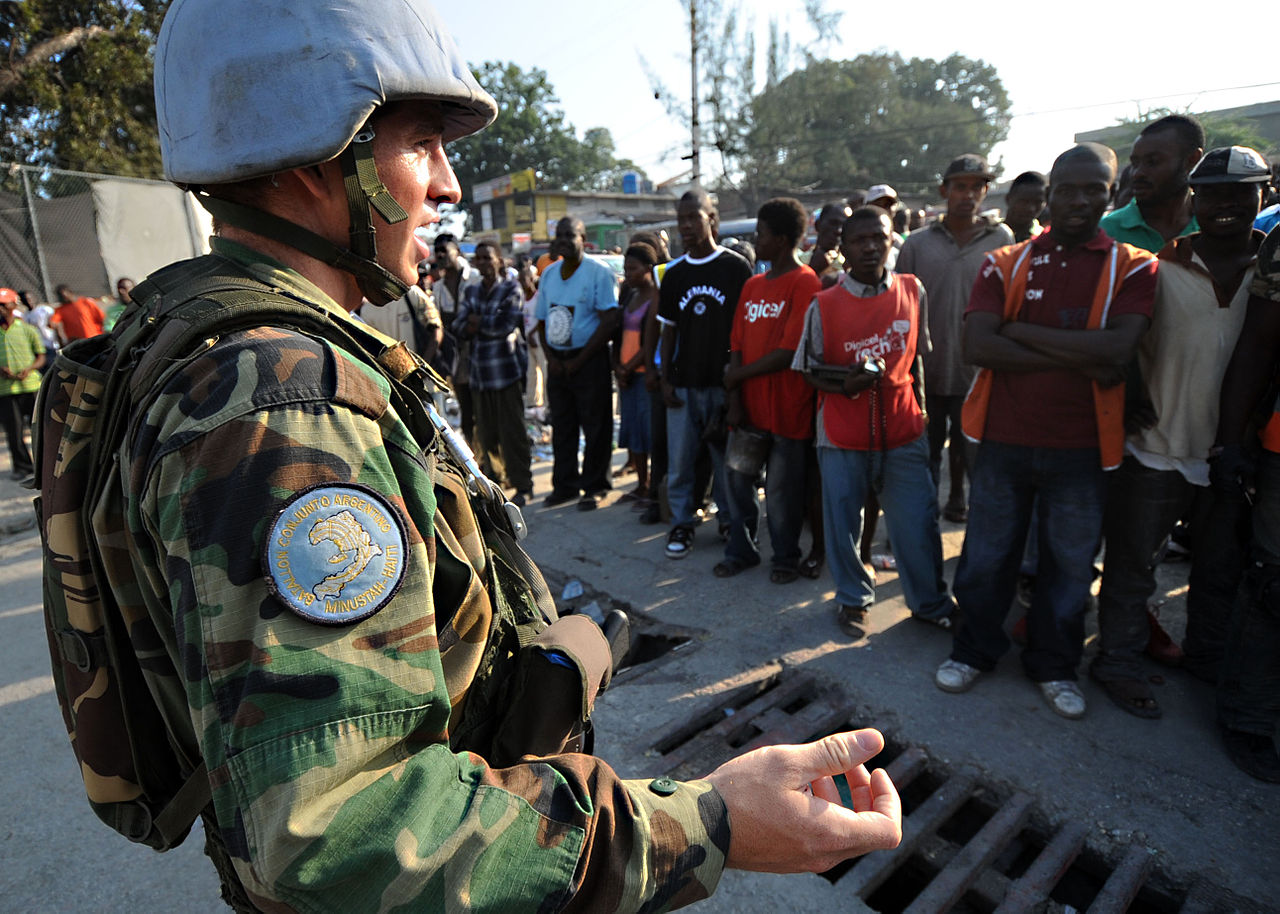 The United Nations celebrated its 70th anniversary (1945-2015) at a difficult time. For the first time since the end of the Cold War the number of armed conflicts around the world has increased. Civil wars and crises  increasing number of inflammatory regions have produced growing number of victims and the largest humanitarian crisis since the Second World War. According to reports by the UN High Commissioner for Refugees,, almost 60 million people are currently displaced by wars and conflicts.

Many factors have contributed to such a state of affairs. Three of them seem to be the most serious. Firstly, the widespread of transnational, organised armed extremist movements which breed on societies deprived of development opportunities and national identity. Secondly, unstable or failing state structures, dominated by armed elites that operating in ethnic and religious conflicts  within artificial and disputed borders. The third is the increasing polarization of  global and regional powers, being played out in crises  such as Syria, Ukraine and in the South China Sea.

In view of such a mixture of clashing interests, quenching and stabilising conflicts, especially building a lasting peace, is extremely difficult. However, the consequences, such as the emergence of ISIS and refugee crisis, should bring more decisive action. Peace operations are one of the main mechanisms available to the international community to stabilise countries and territories where military conflicts are happening. However, for them to be able to fulfil their role in today’s reality, they require fundamental reforms.

Currently there are more than 35 UN peace operations. Some of them have military (and policing) contingents, some of them function as civilian missions supporting political dialogue and peace processes, and some combine both elements. As part of UN missions there are approximately 120,000 ‘blue helmets’ forming the largest military deployment operating in the war zones of the world. They are, however, too few and too poorly equipped to guard peace agreements and cease-fires while also performing policing functions and protecting civilian populations in territories as vast as the Democratic Republic of Congo, Mali, Darfur and South Sudan (total area equivalent to almost half of Europe).

Inadequate mandates of missions constantly  pose challenges. The mandated extent of use of force beyond self-defence, for example when protecting civilians e.g. against armed groups, has been questionable.  Interference in (often unclear) sovereign affairs of countries where operations are carried out is another problematic area. Increasingly complex nature of security challenges regularly undermines the mediatory character of UN operations. Stabilisation tasks are already programmed in the mandates of many of them (e.g. operations in Mali, Haiti and the Central African Republic). In the Democratic Republic of Congo for the first time an Intervention Brigade has been created within the UN forces to support the DRC army in the fight against the rebels (accused of atrocities) in the East.

It is necessary to strengthen the political mandates of missions, their ability to mediate between the conflicted parties and ensure their better integration with the entire UN system in a given territory. There are also changes needed in planning of deployments and management structures of missions. A rapid development of logistics and intelligence capabilities is also essential. Civilian staff should be better prepared to serve in peace missions,  more firmly rooted in the political realities of the regions of operation. The most important, however, is to find the necessary political will for these changes, which are often blocked by a conflict of interests in the Security Council, especially regarding robust mandates.

UN Summit on peacekeeping operations – the beginning of reform or a handful of promises?

Peacekeeping operations have received strong support during the 2105 UN General Assembly (GA) summit, at session chaired by U.S. President Barack Obama. The U.S. administration rightly believes that peace operations are a significantly better alternative (financially and politically) than a potential U.S. intervention, as a crises response mechanism. Barack Obama has announced a new policy of engagement in peacekeeping missions, which involves increasing logistical support, including rapid deployment of troops, building a network of bases, intelligence and training support, and the construction of ‘rapid reaction force’ of the UN. This is the first such formal change in the U.S. approach to engage forces in UN missions since the tragic mission in Somalia in 1993.

For the first time in history,  UN forces have also received strong support from China, who declared to send 8,000 troops and transfer more than 100 million dollars to strengthen the operations, especially in Africa. European countries have also offered support (e.g. Italy will create a special police battalion, Germany will set up a group for engineering and logistical support, and Finland promised to share its special forces and specialists of weapons of mass destruction). In total, during the summit 50 countries pledged a deployment of 40,000 additional soldiers and police, 10 engineering units and, among others, 50 helicopters and 20 field hospitals.

Attention was also drawn to the need for much closer political and operational coherence between peacekeeping operations and stabilisation missions, or even peace enforcement interventions. It is likely that the next display of the UN peace operations will take place in the Middle East and North Africa. Blue helmets may go to Libya, Yemen and Syria to stabilise potential political agreements (which will be unstable in any arrangement). This is a good time to prepare for defining new mandates in the field of countering extremist tendencies and anti-terrorist operations.

The strategic rapprochement and coordination of missions between UN, EU, NATO and regional organisations

Operational and political rapprochement is necessary between the UN peace operations and stabilisation and peace enforcement missions implemented by the EU, NATO, or for example by the African Union. The EU has currently deployed 17 missions under the Common Security and Defence Policy (CSDP). Those include 6 military missions and 11 civilian missions. In total, they engage more than 6,000 personnel. Their locations practically coincide with UN peacekeeping operations. The missions within NATO structures involve 18,000 troops, mainly in Afghanistan and Kosovo, but they also support operations on seas and conduct training missions.

UN needs to actively seek the support of the EU and NATO in order to strengthen the effectiveness of its operations. There is a need for better information and intelligence sharing. Mobile management systems and mobile command units that can be quickly moved over large territories could be provided. UN is also counting on greater logistical and engineering support for rapid deployment of forces and equipment, defence technologies against improvised explosives, and medical facilities. To enhance cooperation, the existing working groups among the organizations should have a fixed formula, and not just a liaison. Closer coordination in the planning stage requires extra effort to connect different institutional mechanisms and different organisational and bureaucratic approaches.

Closer collaboration has been recently tested in the Central African Republic and Mali. The countries have received EU interventions (led by French forces), which have been smoothly replaced by UN peacekeeping missions. However, much remains to be done. The key will be to strengthen mechanisms for the coordination and optimization of the means of making political decisions. The real breakthrough will occur when all organizations will plan missions in support of a broad peace process, with clearly agreed political objectives. It is, however, difficult at a time when numerous interests collide among member states, countries in the region of ongoing conflicts, as well as world powers.

Poland should be a more active participant in international processes related to the creation of strategies and policies towards the prevention and resolution of armed conflicts. For many years Poland has built its position and prestige by its involvement in UN peacekeeping operations. This tradition should be continued,  and should include promoting closer cooperation between the UN, the EU and NATO. Poland should return to the group of countries contributing troops to peacekeeping missions, should send technical and logistical support to peace operations and consider involvement of special forces. Equally important would be sending teams of police officers, as well as civilian experts in areas such as ICT, healthcare, economics or public administration.

Poland may also slowly build a more direct role in supporting peace processes. Poland is a country viewed positively, against which there is little negative connotation (from colonial history or cold war times)  among most of countries currently in conflict. It is an increasingly important player in the EU, therefore, its initiatives can be favourably considered. Poland may build upon the fact that it is neutral, gaining trust of conflict parties. It may play the role of a mediator or sometimes it may actively support operational activities, and contribute to building coalitions and creating political consensus for taking action, i.e.. within the EU forum.

Availability of financial resources undoubtedly is a challenge for the implementation of such a policy. Poland cannot compete with the majority of Western states as a donor, and  is also unable to finance large operations on its own. This does not mean, however, that it could not be more visible and effective. A lot could be achieved through  optimising resources for more strategic and targeted use. One can also place much greater emphasis on the use of expert resources within academia, NGOs and private sectors based on a broad political strategy.

As part of a United Nations operation Polish armed forces may be able to gain valuable field experience. Peacekeeping missions are a perfect ‘testing ground’ for soldiers, an opportunity to gain international contacts and practical skills. They give the possibility to participate in stabilisation operations, civilian protection, defending demarcation lines between the warring parties and protection of humanitarian convoys. The same applies to involvement in EU missions under the CSDP. The increased activity abroad does not need to be at the expense of investment in the country’s own defence capabilities. The strategic balance between developing internal defence capabilities and the activity abroad (with practical and political gains) is the optimal form of  strengthening the security and defence sectors.

In view of the existing conflicts, it is important for Poland to seek adoption of consolidated EU policies towards responding to conflicts, implemented in cooperation with NATO and the United Nations. Polish authorities should become a substantial expert partner in developing policy on peace processes, supporting negotiation and mediation, playing a constructive role in conflict resolution in the Middle East and Africa. Active participation in the coordination of international policies for resolving crises, will allow Poland to improve its position and image, contributing to Poland’s greater influence in several  regions, better relations with partners and growth of Poland’s ‘soft power’.

Taking such a course will certainly support Poland’s efforts to gain a non-permanent seat in the Security Council for the term 2018-2019. Showing constructive activity and creating new initiatives as well as returning to UN operations will certainly be an asset. The NATO 2016 summit in Warsaw could also play an important role, giving an opportunity to highlight the seriousness of the problem of conflicts in the south of the Alliance and to show Poland’s constructive engagement in solving them. This, in turn, will be one of the best strategies for building consensus around priority actions for the ‘eastern flank.’ Crises in the ‘southern flank’ are a fundamental driving force (in addition to economic interest groups) leading to the normalisation of relations with Russia at the expense of Ukraine’s approximation to Europe and Poland’s fundamental interests.

The Polish President, Andrzej Duda, declared before the UN General Assembly: ‘We are ready to increase our direct contribution to the task of maintaining peace and security. This is the reason for Poland’s candidature for becoming a non-permanent member of the Security Council.’ The Polish government will have the chance to show that it treats these assurances seriously.