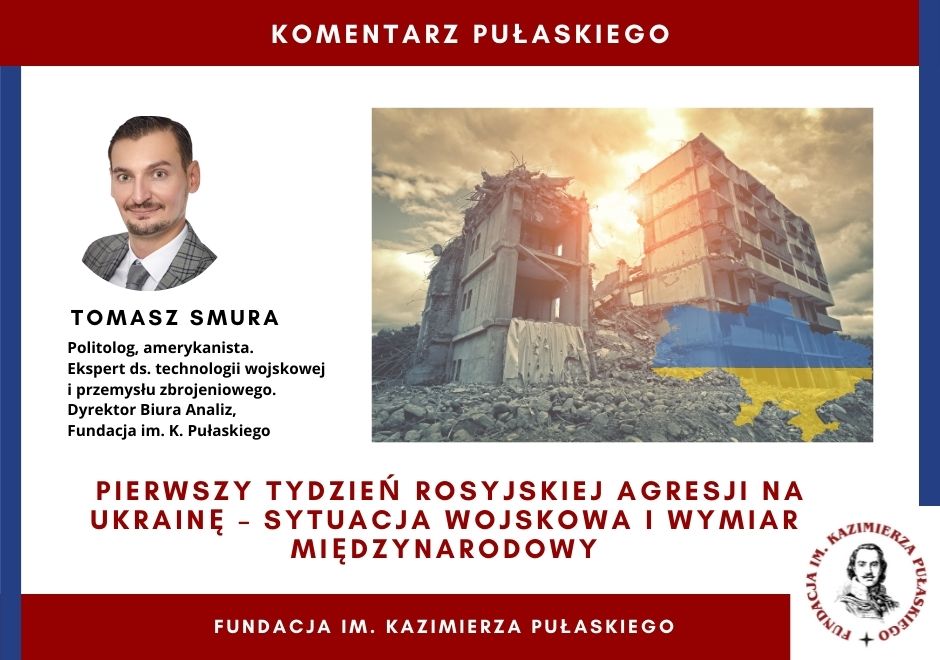 After 7 days of the military campaign initiated by the Russian aggression against Ukraine, the situation of the Ukrainian Armed Forces is deteriorating, the Russians, despite the losses and the unsatisfactory general course of the campaign, are consistently pursuing their operational goals, i.e. encircling Kiev from the west and east. At the same time, there will be a risk of cutting off the Ukrainian forces operating in the south-east of the country. Under these circumstances, the West must intensify pressure on Russia and increase military aid to Ukraine before Ukrainian communication lines are cut.

The Armed Forces of the Russian Federation operating from the north on the west side of the Dnieper (where the units from the Eastern Military District operate) are still failing to make significant progress in their efforts to encircle Kiev from the west. The Russian units have already crossed the line of the M06 motorway – the main road leading to Kiev from the west – but as a result of a counter-attack by the Ukrainian Armed Forces in which they managed to retake the village of Makarov, located west of Kiev, there is a risk of cutting off Russian units operating  south from the highway. The Ukrainian army was also supposed to attack the town of Bucza near Kiyiv, which, according to Ukrainian sources, also managed to recapture, inflicting heavy losses on the Russian side. Nevertheless, Russian units attacking from the north are already moving westward, extending the fighting to Zhytomyr, 100 km west of Kiev.

In the northern axis, on the eastern side of the Dnieper, the Russians has not managed to break the defence of Chernihiv for a week and some Russian units bypassed the city, reaching the town of Kozielec, about 50 km from Kiev, trying to join forces with units from thef the Western MD advancing from the eastern direction along the M02 motorway line running from the north-eastern part of the border towards Kiev, which have already reached Bobrovica (also about 50 km from Kiev). About 60 km south of the M02 motorway line, the Russian units of the 1st Guards Tank Army operating eastwards along the H07 road, after passing the still unoccupied city of Sumy, are consistently approaching the Ukrainian capital. On the southern flank of the eastern operational direction, some of the Russian units bypassed the shelled Kharkiv, moving towards Poltava, most likely in order to join forces from the south and cut off Ukrainian forces around Donbas.

In the southern direction, units of the 22nd Army Corps surrounded Mariupol and obtained a connection via corridor to the Donetsk People’s Republic. In turn, Russian troops in the south, attacking westwards, succeeded in capturing the first major Ukrainian city – Kherson, and continued their attack on Mykolaiv.

In the face of unsatisfactory progress in military operations and increasing international pressure on Russia, on February 27, Vladimir Putin announced that strategic deterrence forces were put on special readiness, which was intended to discourage western countries from providing additional support to the Ukrainian Armed Forces. At the same time, in recent days, there has been a brutalisation of Russian actions, expressed in the increased shelling of Ukrainian cities – Including civilian targets (as in the case of the TV tower in Kiev) – with the use of ballistic missiles and artillery, including the use of cluster munitions considered to be inhuman, disregarding the principle of proportionality required by the law of armed conflicts.

After the first package of sanctions, including preventing Russian banks and financial institutions from accessing international capital markets and banning the sale of oil processing technology, as well as the supply of passenger planes and their parts, semiconductors and advanced technologies (on the other hand, the president of Russia Vladimir Putin and the minister of foreign affairs Sergey Lavrov were subject to personal sanctions) ) on February 26 the EU imposed another package of sanctions on Russia. It included the exclusion of selected Russian banks from the SWIFT electronic interbank communication system and the implementation of measures to prevent the Russian central bank from taking measures limiting the effects of the sanctions. Action is also to be taken against people and institutions that contributed to the war. The next day, it was decided to finance the purchases of weapons and medical equipment for Ukraine for the amount of EUR 500 million from the European Peace Facility instrument. According to the information provided by EU diplomats, the assistance could even cover the financing of the purchase of combat aircraft for the Ukrainian aviation (the information that it would cover, among others, Polish MiG-29 fighters has not been officially confirmed by the Polish authorities). At the meeting of the EU Council on February 27 it was also decided to close the European sky to all Russian airplanes, and the next day, 26 people from the Kremlin’s circle were added to the list of people subject to individual sanctions (including freezing funds and entry bans). The United States and non-EU G7 countries have also adopted sanctions similar to the EU.

In recent days, individual decisions to hand over weapons and military equipment to Ukraine (mainly guided anti-tank missiles, MANPADs, individual equipment and fuel) have also been made by a number of EU and NATO countries (including Belgium, the Netherlands, Luxembourg, Germany and Sweden).

Russia was also condemned at the United Nations, where the General Assembly demanded the Russian Federation to immediately, completely and unconditionally withdraw all its armed forces from Ukraine within its internationally recognized borders. As many as 141 countries voted for the resolution, and only 5, including Russia and Belarus, were against (35 countries, including China, abstained).

The strategic situation of the Ukrainian Armed Forces is deteriorating. The Russians, despite the losses and the unsatisfactory general course of the campaign, are pursuing their operational goals, i.e. encircling Kiev from the west. The Russians – apart from besieged Mariupol – also captured the entire eastern part of Ukraine from Kherson to the “border” of the DPR. In addition, the Ukrainian troops in the southern part of the country can be locked in a huge strategic trap between Donbass,  controlled by the Russians south and the Dnieper River from the west,  which 20th Army operating from Kharkiv to Poltava is trying to close from the north.

There are many indications that in the next several days, Ukrainian troops will be closed in the cities from which they will continue their defence. In the face of potentially large losses as a result of a possible storming of the cities, the Russians will probably move to the siege of Kiev and Kharkiv combined with intensified artillery fire, in order to force the surrender of Ukrainian defenders. In these circumstances, some hopes may be pinned on Ukrainian offensive operations on the left wing of Russian units aimed at closing Kiev from the west. A possible break in Russian lines in this direction could improve the situation of the Ukrainian capital and improve Ukraine’s negotiating position in the next round of ceasefire talks with Russia, which are to be held on March 3 th in the Białowieża Primeval Forest in Belarus.

International pressure on Russia must be continued and must be combined with the intensification of sanctions affecting the Russian elite, which could force Russia’s leadership to soften the negotiating stance. One should also accelerate and intensify the supply of weapons to Ukraine, especially those useful for fighting in cities and guerrilla warfare behind enemy lines (guided anti-tank missiles, circulating ammunition), before Russian troops interrupt Ukrainian communication lines.

Author: Dr. Tomasz Smura, Director of the Research Office of the Casimir Pulaski