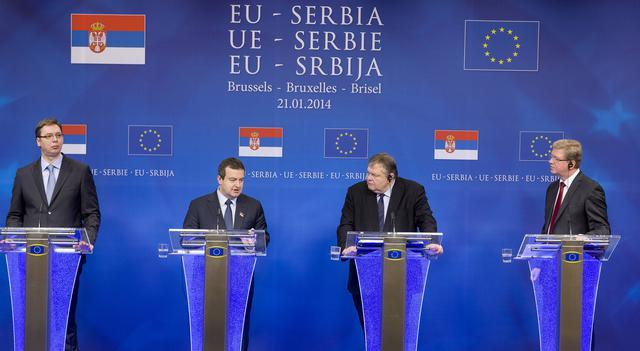 On April 27, 2014, the Serbian parliament granted a vote of confidence to the new government of Aleksander Vučić, leader of the Serbian Progressive Party (SNS), which had enjoyed an overwhelming victory in the March early elections. 198 deputies voted for the appointment of a new government; 23 were against. It was Aleksander Vučić (the leader of the main party in the coalition government at that time, as well as being the Deputy Prime Minister and Minister of National Defense) who made the decision to call early elections. He found that, after the start of Serbia’s accession negotiations to the EU (January 2014), stronger public support would be needed for the planned reforms to accelerate the integration process.

In the elections the SNS achieved a decisive victory, winning 48 percent of votes. But it lacked the eight seats necessary to get the majority that would enable them to carry out a change to the constitution. Therefore, the SNS decided to create a coalition government with its former partner, the Socialist Party of Serbia (SPS). Its leader Ivica Dačić, acquired the portfolios of Deputy Prime Minister and Minister of Foreign Affairs. Another coalition partner was the League of Social Democrats of Vojvodina. So now the parliamentary opposition, which has only 42 seats, has been completely marginalized.

Prime Minister Vučić in his exposé outlined the priorities of the new government, among which the most important are profound economic reforms in the country. Serbia, which has still not overcome the economic crisis, has been facing the problem of a budget deficit of 6.5 percent of GDP (1.4 billion euros) and a high unemployment rate (20.1 percent). Previous governments led a policy of taking foreign loans (including from the European Investment Bank and the European Bank for Reconstruction and Development) to avoid bankruptcy and to put off the implementation of the necessary changes which would affect the society. Vučić, bearing in mind the conditions imposed by the International Monetary Fund (IMF) and the World Bank (WB), has announced reforms that will reduce the budget deficit to 4 percent of GDP in 2017. The reforms will involve cutting public sector wages by 10 percent (currently it employs 800,000 people), an extension of working hours in this sector, increasing the retirement age for women from 60 to 63 years, the discontinuation of subsidizing state-owned enterprises which bring a financial loss to the state. There will also be changes made to the tax system. The authorities announced the abolition from July 1, 2014, of the solidarity tax: 20 per cent for those earning more than 60,000 dinars per month (approximately 520 euros) and 25 per cent for those earning more than 100,000 dinars (about 870 euros). In addition, more than 160 state-owned enterprises will be privatized, mainly in the telecommunication and energy, including ‘Telekom’ or ‘Elektroprivreda Srbije.’ As the new prime minister emphasized, only thanks to achieving macroeconomic and fiscal stability will it be possible to increase the competitiveness of the Serbian economy and attract foreign investments which will also contribute to the creation of new jobs. Along with the healing of the country’s economy it is also important to fight ruthlessly against corruption and organized crime. The new Finance Minister Lazar Krstic and Economy Minister Dušan Vujović will be responsible for carrying out these reforms. It is worth noting that as many as seven of the nineteen ministers in the cabinet of Vučici have a degree in economics.

However, the recent flood, the largest for 120 years in the Balkans, will definitely slow down the implementation of the announced reforms. In Serbia, it affected approximately 25 percent of the country, mainly in the areas west and south of Belgrade. It resulted in the deaths of 51 people, and affected more than half a million people. The European Bank for Reconstruction and Development assesses Serbia’s losses as amounting to between 1.5 and 2 billion euros. Producing around 10 percent GDP of the country, the agricultural sector has suffered most. In addition, the flood led to the destruction of roads and railway lines, as well as interrupting the operation of a number of large industrial plants (including two hydroelectric power plants on the river Morava), and ceased the operability of some energy transmission lines. The flood also threatened the functioning of the Nikola Tesla power plant, which produces about half of the country’s electricity. This natural disaster will certainly have a negative impact on Serbia’s economic growth and the level of inflation.

Another priority for the new Serbian government is to accelerate the process of integration with the European Union. In January 2014, Serbia started accession negotiations with the European Commission. The ambition of the authorities in Belgrade is to obtain membership by 2020; therefore they expect that the talks will be completed by 2018 or 2019 at the latest. It should be noted that in the case of Serbia a new approach to negotiations has been adopted. It assumes that chapters 23 and 24 concerning the rule of law (‘Justice and Fundamental Rights’ and ‘Justice, Freedom and Security’) are considered crucial in the enlargement process.

Undoubtedly, the new government’s ambitious plans are feasible, but it is necessary first of all to develop a detailed action plan. By the end of 2015 the authorities in Belgrade should have already completed the screening stage, which is the initial phase of negotiations for the EU membership. It consists in reviewing the national law and its compatibility with EU legislation.

There is no doubt that the normalization of relations with Kosovo will have a significant impact on the pace of ongoing negotiations. One should remember that in 2013 the authorities in Belgrade made much progress in this area by signing an agreement to normalize relations with the government in Pristina. However, Serbia continues to maintain its position: it does not intend to recognize Kosovo’s independence, even if this means it will be unable to join the EU.

It is worth noting that in Serbia’s current government there is no longer a separate ministry for Kosovo and Metohija. The director for government office for Kosovo and Metohija has also changed. Aleksander Vulin, who performed this function until now, has become the new Minister of Labor and Social Affairs, and his place was taken by Marko Đurić, a member of the ruling SNS party (he was previously Foreign Policy Advisor to the President). He has experience in matters relating to Kosovo, because he participated in a dialogue with Pristina and Belgrade, and prepared a political platform of the government, for, among other matters, negotiations on cooperation with Kosovo’s local government institutions. As the new director of the government office for Kosovo and Metohija, M. Đurić will pursue a policy convergent with the position taken by President Nikolic, who constantly repeats that any new agreements concluded by the government cannot threaten the territorial integrity of the state.

‘Balancing’ between the Russian Federation and the EU

Russia is traditionally Serbia’s ally. Currently, in addition to the political and strategic partnership signed in May 2013, the two countries have strong economic ties. Serbia is the only country outside the Commonwealth of Independent States (CIS) that has signed a free trade agreement with Russia. In addition, the Serbian energy company ‘Serbgaz’ plays a significant role in the construction of the South Stream pipeline (South Stream), which will enable the future transport of Russian gas supplies to Western Europe, bypassing Ukraine. Moreover, it is Gazprom, responsible for the execution of this energy project, that holds a majority stake in Serbia’s largest energy company ‘NIS.’

Close relations determined the position of the Serbian government towards the crisis in Ukraine. Serbia, from the very start, has tried to be neutral, not taking either side of the conflict. Still, the authorities in Belgrade, though not explicitly, did not agree with the opinion expressed by President Vladimir Putin, who, when explaining his policy, compared the position of Crimea to the one of Kosovo. The head of the Serbian diplomacy Ivica Dacic stated clearly that Serbia is a strong advocate of the territorial integrity of each state, but at the same time stressed that the authorities in Belgrade will never agree to extend any sanctions against Russia.

Such a position of the Serbian government certainly is not consistent with the position taken by the EU. Brussels turned to Serbia and asked her to balance its national interests with the interests of the whole EU, which it intends to join in the future. Undoubtedly, this kind of balancing in foreign policy between Russia and the EU will only be possible until the opening of Serbia’s 31 negotiating chapter regarding foreign policy. Currently, there is one more additional factor that makes Belgrade authorities maintain its conservative stance on events in Ukraine. Serbia is aware of the fact that among the EU member states, there is no unanimity as to the shape of a common policy towards Russia. This difference of opinion is also reflected in the EU’s position towards Syria and Kosovo (Spain, Cyprus, Romania, Slovakia, Greece do not recognize its independence).