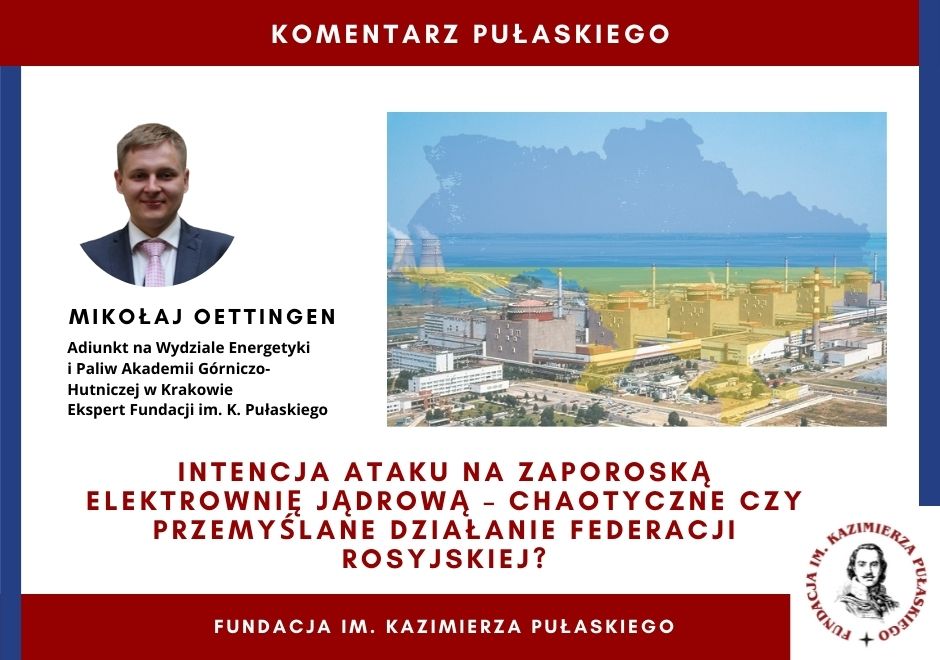 On the night of 3 to 4 March this year, the Russian Federation carried out an attack on the Zaporizhzhia Nuclear Power Plant. This has raised concerns among the public in Western countries about the safety of nuclear reactors. Intentional action by the Russian Federation to destroy or damage the nuclear power plant seems unlikely. The most likely aim of the attack, apart from taking over the plant, seems to be to create disinformation about the potential possibility of damage to the reactors and an increase in radiation.

The Zaporizhzhia Nuclear Power Plant (Запорізька атомна електростанція – ЗАЕС) is located in the Zaporizhzhia Oblast in the town of Enerhodar, on the Dnieper River in the south-eastern part of Ukraine, approximately 170 km from Crimea. The plant operates six power units with second-generation light water reactors of the Russian VVER-1000/V320 design. The first reactor was put into commercial operation in December 1985 and the last in September 1995. The installed capacity of the plant is 6 GWel and the net capacity is about 5.7 GWel. The plant is owned by the Ukrainian state nuclear corporation Energoatom.

Nuclear power in Ukraine provides more than 50 per cent of the electricity with the Zaporizhzhia Nuclear Power Plant accounting for about 20 per cent of the total balance. In recent years, modernization work has been successfully carried out at the plant to extend the lifetime of the reactors by another 10 years. It is also worth noting that four units have partially deployed nuclear fuel made by the US company Westinghouse.  This process is part of a broader strategy to make Ukraine’s nuclear power plants independent of Russian fuel produced by TVEL.

Importantly, the plant also has a spent nuclear fuel dry storage facility, which became operational in 2001. Spent nuclear fuel is stored in the open air in special storage containers, in accordance with all international safety standards. Currently there are about 170 storage containers containing about 4,000 used fuel assemblies. The technology for the repository was provided in the 1990s by the US companies DE&S and SNC, which have implemented similar technology in several US nuclear power plants.

According to media reports, the attack on the power plant was carried out during the night of 3 to 4 March this year with unidentified firearms. There is no precise information on which parts of the power station were attacked and what the real extent of the damage is. The only reliable information relates to a fire in an administrative building directly adjacent to the power plant site, which did not have any impact on its operation. It is located about 400 meters from the nearest reactor building and about one kilometer from the spent fuel storage facility. According to available information, the fire has been extinguished, there is no communication with the plant, it is under the control of the Russian military, the staff are carrying out their standard duties, and there have been no increases in radiation. Latest reports indicate that out of the six reactors, one is being upgraded, four have been shut down due to the attack and one is operating at partial power.

Each of the reactors of the Zaporizhzhia Nuclear Power Plant is enclosed in a safety containment and has a number of passive and active safety systems to ensure, first of all, the cooling of the reactor core as well as its shutdown in case of an emergency.  The safety containment is made of reinforced concrete and is primarily designed to shield the reactor from external events, such as aircraft impact, and internal events, such as release of radioactive substances into the environment. The VVER 1000/V320 type reactors are advanced and widely used in several European countries. No serious accident of a reactor of this type has been reported. The technology of the VVER reactors is extremely different from the technology of the RBMK reactors operating at the Chernobyl Nuclear Power Plant.

The Russian Federation has advanced knowledge and experience in the field of civilian as well as military nuclear energy. Thus, the awareness of political as well as military elites in this field should also be high with regard to the potential consequences of damage or destruction of a nuclear reactor or a spent nuclear fuel storage facility. It should be noted that any facility can be destroyed if the aggressor has the appropriate means and intent. It is extremely irresponsible to initiate an attack with actual firepower, in the area or in the vicinity of a nuclear power plant, and the political and military elite of the Russian Federation should be aware of this, especially since the country has already had to deal with the consequences of the Chernobyl nuclear disaster once.

The real intentions of the aggressor are connected, first and foremost, with taking over the power station and creating disinformation based on an attack which does little harm to the technological operation of the power station. Such disinformation is aimed at provoking a specific reaction from Western governments and societies, which in turn can be used to exert influence in line with Kremlin’s plans. Thus, the attack should be regarded not as a chaotic action, but as a well-thought-out element of the Russian Federation’s strategy. The following conclusions can be drawn from an analysis of the attack:

PULASKI POLICY PAPER: What if not the MiGs? Western options for military aid to Ukraine (Tomasz Smura)