EXPERT’s COMMENTARY: Russian invasion of Ukraine – what else can the West do? (Marcin Bużański) 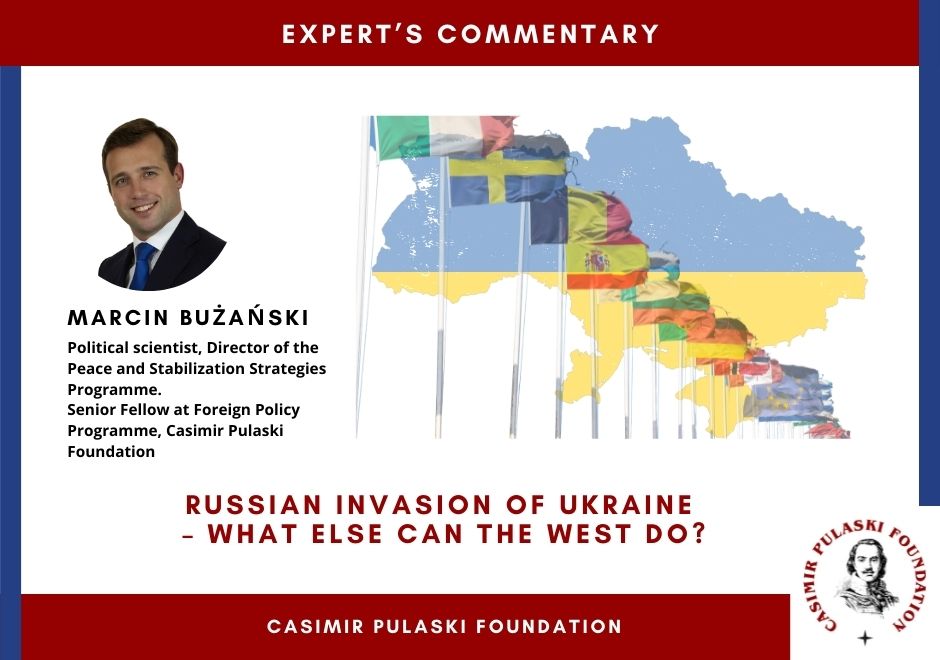 EXPERT’s COMMENTARY: Russian invasion of Ukraine – what else can the West do? (Marcin Bużański)

Unleashing its war machine in Ukraine, Russia has challenged the foundations of the international security order. It must be defended, with the Western democracies leading this fight. It starts with overwhelming support for Ukraine. Second, Russian regime must be confronted and contained – in a sustained manner. Third – Western alliances need to be resolute and strengthened, including through expansion.

Today Ukrainians are fighting for peaceful and prosperous lifestyles for the people in Europe and beyond. First order of business is to provide them military and non-military support – and continue to do so as long as needed. While at this early point, sending in NATO troops is not an option anything short of it should be delivered. Ukraine is the frontline where the conviction of the Western alliance to defend a rules-based order is tested.

Russia wanted an order driven by force, in which states are subjects. This may seem logical for a brutal dictatorship with global ambitions – it’s the only order in which it can thrive. To build it, Russia has been banking on the US and other Western countries’ increasing confrontation with China. The Kremlin imagined something like a three-block + order (US, China, Russia + smaller chiefdoms and nonaligned), a new concert of powers. Ironically, Putin may have slayed that prospect with his aggression in Ukraine.

Contrary to the image of a master in geopolitical chess, it seems there is no grand strategy in Putin’s actions. There are merely tactics, a KGB originated toolkit of actions.  His decisions seem to be driven by an obsession about a place in history through imperial revisionism. And maybe most importantly, he believes that waging a war is the only way to stay in power and sustain full control over the Russian society. All with complete contempt for human life.

Countries in Central Europe like Poland and the Baltic States have been warning for a long time about the significance of the threat from Russia. Finally, the world is waking up. The initial response with sweeping sanctions and international ostracism towards Russia are promising. The response needs to expand with sustained, long term, systematic solutions – notably cutting of any dependency on Russia’s energy resources. Communicating the truth to Russian citizens is also important. Their isolation and the impending hardship should have one culprit – their own leadership.

Putin has to see the unwavering conviction of the Western alliance of countries to contain and deter Russia. Even if some diplomatic solution could be negotiated to stop the bloodshed in Ukraine today (talks have started – though it seems too early for that), there can be no return to business as usual.

It has been encouraging to see new levels of allied solidarity, and determination. It has to be sustained and Ukraine is possibly facing a long and brutal confrontation. Hard to imagine Russia installing a puppet regime in Kiev, which would keep control over the territory of the whole country. An insurgency in response is more than a given – and it would make the Afghanistan occupation look like a walk in the park.

The Western alliance should be strengthened – including through accelerated expansion. EU accession should be put on the table for Moldova, Georgia, the Western Balkan Countries, and of course Ukraine. Sweden and Finland should start a campaign for joining NATO – primarily focused on their own populations. EU cooperation on defense and security needs to be depended, starting with increasing defense budgets, and alignment on foreign policy. The concept of an Energy Union should be fast tracked. While support for Ukraine, containment and deterring Russia are priorities, the momentum should be seized by Western alliance to lead in the new international reality.