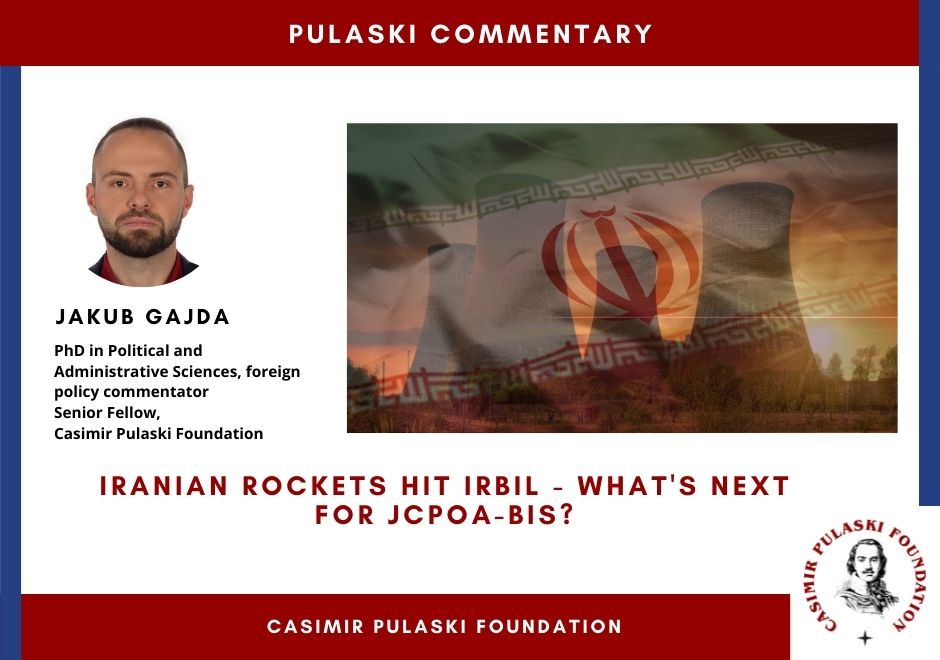 The Islamic Revolutionary Guard Corps (IRGC) released a statement on Sunday that it has attacked “Israeli Mossad training centers” in the Iraqi Kurdistan Autonomous Region with precision-guided ballistic missiles. The IRGC said the operation was in response to the Israeli killing (also in a rocket attack) of two Iranian military advisers on the outskirts of Damascus, Syria, on Monday, March 7.

Iran’s actions have surprised analysts, especially in the context of talks of a new nuclear deal, which would be sure to ease sanctions and return Iran to the world economy. Interestingly, even before the IRGC command took responsibility for the attack, the Iranian media identified Shiite militias in Iraq as the potential perpetrators, taking revenge on America and its allies for the deaths of General Qasem Soleimani and Abu Mahdi al-Muhandis in January 2020.

The IRGC’s statement claiming responsibility for the attack can therefore be considered unexpected and quite controversial. Undoubtedly, opponents to a new nuclear deal with Iran have a new argument to prove that Iran’s actions in the region are aggressive. Tehran’s statements on the matter regarding the necessity of self-defense will not be considered, regardless of their legitimacy or lack thereof, as the facts are clear: Iran launched ballistic missiles into the territory of another country and its authorities admitted it themselves.

Therefore, this incident can be considered as a deliberate Iranian action to sabotage the Vienna talks. This hypothesis is quite plausible, as there are many political figures in the Iranian establishment who are reluctant to enter a new agreement. There are articles on Iranian websites that say that a new deal should not be negotiated because it will probably be abandoned by the next Republican president who sits in the White House anyway. It should be noted that Iranian conservative politicians, especially the clergy from Ali Khamenei’s circles, remained skeptical and distanced themselves from Mohammad Khatami and Mohammad Zarif’s success in signing the first JCPOA in 2015.

In addition to the objectively valid concern about the West’s true intentions, especially Washington’s, there is another important factor related to the reluctance of Iranian elites. The Shi’ite government is afraid of upsetting the current system and political balance in Iran that has been maintained for four decades. The entry of Western companies into the Iranian market, as well as the expansion of Iranian businesses to the West, will certainly engender changes in the social, cultural, and political spheres, inevitably creating ties with institutions of foreign influence. Undoubtedly, Supreme Leader Ali Khamenei and his faction have always preferred ideology over business and economic success. In Iran, there is a saying that if the authorities gave up their regional games – mainly against Israel, in the Levant, and rivalry on the Arabian Peninsula – then “Iran would be earning millions of dollars every day.” It would then be possible to build new roads, airports, and make huge investments that would bring Iran closer to being the de facto leader of the Middle East. On the other hand, the Islamic Republic authorities’ loyalty to the ideas of the revolution puts them at odds with the West, meaning Iran can use only part of its economic potential. The West is economically attractive to Iran, but there is an ideological fear of it. In the light of current events, Tehran’s strategy of looking to the East and searching for ties with countries in Asia (including Russia) is becoming clearer and clearer.

It is worth adding that Iran signed a protocol on Friday in Tashkent with the Shanghai Cooperation Organization (SCO), referred to as the “anti-NATO,” approaching full membership. It’s trade with the countries in this group also increased by more than 40 percent in the last year. Iran’s attitude in the current situation may raise legitimate concerns in the West in the context of Russia’s aggression against Ukraine and the need to rapidly diversify energy resource suppliers to the European market. Iran’s potential in this regard is undoubtedly of great value. While locked in a conflict with Moscow, the need to continue to drive diplomatic and political engagement in Asia is indisputable. Iran, with all its strengths and weaknesses, is one of the most important players in this regard.