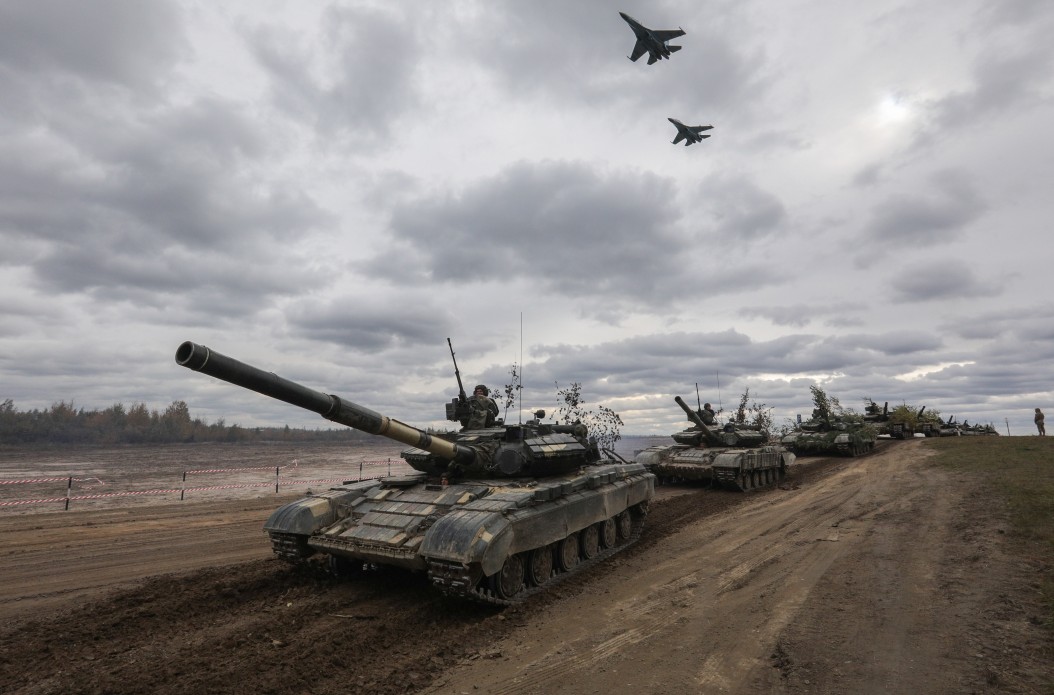 Russian aggression against Ukraine continues. The second day of the conflict, like the first one, began with massive missile attacks on Ukrainian military targets (e.g.  air defence systems). The land offensive continued along all operational axis.

To the north, towards Kiev, on the western side of the Dnieper, Russian sabotage groups appeared in the north-western district of Kiev, Obolon. However, according to the information provided by the Ukrainian authorities in the morning, they were broken up. It seems that it could have been another attempt to accelerate the Russian offensive on the capital of Ukraine from this side, after yesterday’s unsuccessful attempt of the Russian air assault troops transported with the help of helicopters  to take over the Hostomel airport, on which planes with subunits of the 76th Guards Air Assault Division from Pskov were expected to land.

It seems that this axis, due to the lack of larger cities on the road, is currently the greatest threat to the Ukrainian capital (currently Russian troops are approx. 30 km from the center of Kiev). For this reason, the Ukrainian army on February 25 decided to blow up the bridges over the Teteriv rivers near Ivankovo ​​and Irpin. On the eastern side of the Dnieper, the Russian troops stopped at Chernihiv, about 100 km from Kiev, where they attacked, among others, public utility facilities. Along the north-eastern axis, the Russians managed to enter the outskirts of Sumy, with a population of over 200,000, located about 40 km from the border. According to reports, the city of Konotop, located approximately 70 km from the border near the Moscow-Kyiv route with a population of approximately 40,000, was defended. Approximately 40 pieces of Russian military equipment were reported to be destroyed.

On the main eastern axis – Belgorod – Kharkiv, where units of the 20th Guards Combined Arms Army  and probably the 1st Guards Tank Army are operating, an attempt to encircle Kharkiv, combined with shelling at the city, is to be carried out. Along the southern axis, the Russian troops heading from Crimea towards Mariupol, according to local authorities, were spotted around 100 km from Melitopol. On the second day of the war, several important reports (although difficult to be unambiguously verified) influenced the morale of the Ukrainian soldiers. In the morning, Ukrainian missile units fired short-range ballistic missiles from Tochka-U launchers towards the Russian military airbase Millers near Rostov, where at least one Su-30 heavy fighter was destroyed. Ukrainian sources also reported during the day about further destructions of aircraft, including the heavy transport Il-76 near Vasylkiv, south-east of the Ukrainian capital, which may indicate further attempts to organise a landing on the outskirts of Kiev in order to encircle the city. The morale of Ukrainian soldiers will probably also be influenced by the attitude of border guard’s soldiers stationed on the Snake Island, located about 30 km from the Ukrainian coast, who, despite the lack of a chance for defense, refused to surrender to the crews of Russian ships. Overall, the Ukrainian Armed Forces informed that the Russians had lost over 3,500 soldiers, around 100 tanks, around 500 armored vehicles, as well as 24 planes and helicopters since the beginning of the attack. Even taking into account that these data may be overestimated, on the basis of the available photos of the destroyed Russian columns, the Russian losses can be estimated as, at least, several hundred soldiers.

At the extraordinary meeting of the European Council on February 24 the EU decided to impose sanctions on Russia in four areas. The first is to block Russian banks and financial institutions from accessing international capital markets, which will affect approx. 70 percent banking market in Russia (a similar package of sanctions in this area was also announced by the United States). Further sanctions relate to oil refining technology, the ban on the sale of passenger planes and their parts, as well as semiconductors and modern technologies. The next day, personal sanctions were imposed on the President of Russia Vladimir Putin, and the Minister of Foreign Affairs, Sergei Lavrov. So far, however, due to objections from four Member States, it has not been possible to adopt a common position on the exclusion of Russia from the banking information exchange system SWIFT, although there has been information about the openness in this matter on the part of the key blocking states, i.e. Germany and Italy.

After the first 48 hours of the conflict, it is evident that the Russians have not yet succeeded in paralysing the Ukrainian defence system. The chain of command and the basic functions of the state are maintained. In the military dimension, the Russians seem to be focusing on taking Kiev as quickly as possible with the help of airborne and subversive actions along with the consistent progress of heavier units, avoiding potentially bloody fighting in other large cities. Massive missile (according to information from the US administration, more than 200 cruise and ballistic missiles have been already fired against Ukraine) and artillery attacks aimed at breaking the morale of Ukrainian soldiers and civilians were continued. Despite such a tactic, the Ukrainian Armed Forces managed to inflict losses on the Russians. In this war, time is working in favour of Ukrainians – along with the protracted campaign, further losses on the Russian side and growing international pressure, especially if the fighting becomes brutal and affects cities and civilians to a greater extent, pressure on the Kremlin to look for a different solution, than the complete destruction of the Ukrainian state, may be increased.

At present, the first signals about the possibility of starting truce talks are appearing (Putin was supposed to talk about the possibility of such a talks in a conversation with the PRC Chairman Xi Jinping, negotiations on a possible truce were also proposed directly by the Ukrainian President Volodymyr Zelensky). Taking into account, however, the political, material and prestigious losses that Russia has already suffered an intermediate solution at this stage will hardly be interesting for the Kremlin.