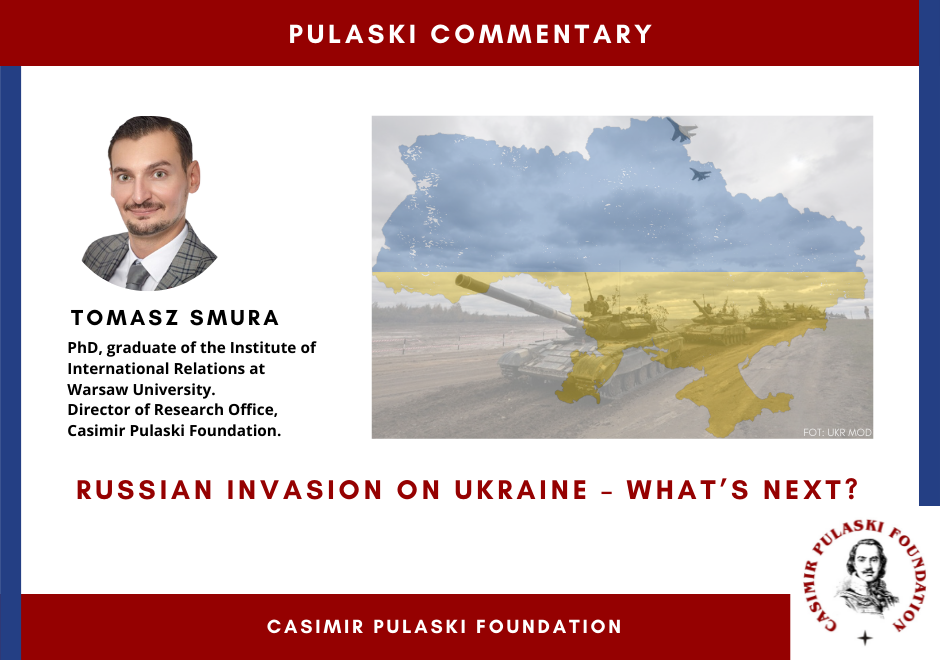 On February 24, 2022 at around 5 am, following months of psychological pressure and hybrid operations that pick up pace in October and November 2021 (before that, a similar type of operation happened in May and April 2021), Russia has decided to launch a full scale invasion of Ukraine. This was in fact the fulfilment of the worst-case-scenario, predicted by the current US administration, to a Kremlin imposed crisis on the Russo-Ukrianian borders.

According to Ukrainian sources, the Russian invasion (that was in the making since October 2021), begun with precision strikes against key military installations. These included, but were not limited to air force bases and early-warning radar stations. These strategic targets were attacked with the use of Russian long range, highly maneuverable cruise missiles (aka standoff weapons). Ukraine has also raised alarms that its territory was attacked with the use of ballistic missiles (intelligence suggest these could have been the 9L720 Iskander systems) from the territory of Belarus. Several hours after the first air and missile attacks, at around 8 am, the Russian Armed Forces begun the land invasion of Ukraine by crossing the border from three separate directions: from the South (from Crimea, attacking north-western and north-eastern Ukraine), from the East (from Belgorod, attacking Kharkov), as well as from the North (from Belarus, attacking Kiev). The assault on the capital of Ukraine is further aided by the airborne troops (VDV), which are tasked with securing bridgeheads close to Kiev in order to speed up the passage of slower and heaver units. According to latest reports (afternoon 24/02), Russian VDV forces took control of the Hostomel airport that is located 20 km from the center of Ukrainian capital.

According to information from Ukrainian armed forces, as well as multiple photos and videos that are floating around social media, it can be assumed that in the initial phases of invasion, the Russian Armed Forces have lost a number of aircraft, helicopters and tanks. Sources also suggest that these feel prey to Wester-made anti-amour and anti-tank systems given to Ukraine by NATO members in the recent weeks. This goes to show that Ukrainian armed forces managed to upkeep their morale, and continue fighting despite Russian advantage in equipment and numbers. Due to the shape and geographical characteristics of Ukraine it is expected that heavy fighting will began on only at the outskirts of major Ukrainian cities

The aggression of Russia on Ukraine was preceded by a speech of Russian President Vladimir Putin, who has announced a beginning of a large-scale military operation that was aimed at “demilitarization and denazification” of Ukraine. The Russian propaganda has been long known to accuse Ukraine of their pro-Nazi sentiments. The Russian invasion was supposedly agreed upon as a result of a formal request by the Donetsk People’s Republic (DPR) and the Lugansk People’s Republic (LPR) that were formally recognized by Moscow in the beginning of the same week. This event also marked a formal signing of military cooperation pacts between the separatist “republics” and Russia.

During the same event where DPR and LPR have been unilaterally recognized by Moscow, President Putin has also given out an aggressive speech, where he claimed that the Ukrainian statehood is “artificial and unnatural” and where he falsely accused Ukraine of war crimes (including mass murders in Donbas and attempts to acquire nuclear weapons). Soon afterwards, Putin received a formal approval of the Russian Duma to use the Russian Armed Forces outside of Russian borders. Only now do we know that this was a prelude to the ongoing aggression.

The first symptoms of the possible Russian attack on Ukrainian soil were visible for months – the US Administration has reported on several occasion that based on their intelligence an invasion is practically unavoidable. Because of that, the Russian aggression has surprised the West far less than the similar move by Moscow in 2014. Even before the first tanks rolled into Ukraine, a number of NATO countries had begun working towards strengthening NATO’s Eastern Flank’s defenses. Poland has seen the arrival of the 82nd Airborne Division from USA, the Royal Marines Commandos from the British Army as well as a number of allied fighters and helicopters. Romania saw the arrival of the 2nd Air Cavalry units and the Enhanced Forward Presence forces were further strengthened by Germany. The first batch of sanction was also imposed, as soon as Russia decided to recognise the existence and aid the armies of the DPR and the LPR. These initial sanctions included the banning of any economic cooperation with the two “republics”, the suspension of certification efforts related to the Nord Stream 2 pipeline by Germany, as well as the freezing of all assets that major Russian banks had in Europe. Personal sanctions were also imposed on those Russian parliamentarians who supported the bill to formally recognise DPR and LPR in the Duma. As the result of Russian full-scale invasion further sanctions will now certainly follow. During a press conference, NATO Secretary General Jens Stoltenberg has informed the public that thanks to the approval of the North Atlantic Council, the defensive plans for NATO’s Eastern Flank have been activated. These will include a relocation of NATO Response Force to whenever they will be needed the most. The first component of NATO’s high-readiness troops are the VJTF units that are supposed to be fully mobilized in 5 to 7 days. On February 25th a virtual NATO Summit will also be held. There, the member states will decide on further steps aimed at Russia. In a separate press conference, the representatives of the EU have spoken of the most serious violation of international law since WWII. They have also announced that the Council of Europe will urgently be assembled in order to agree on “the most painful sanctions ever in history”. These will likely include the freezing of capital of all Russian banks. The issue of excluding Russia from the SWIFT payment system also remains on the table but opposition to this move is likely.

China on the other hand presented a far more accepting, yet cautions approach to Russian actions. Beijing highlighted that we ought to respect “concerns regarding security” of other nations (this is exactly how Russia justifies its actions against Ukraine), as well as spoke about American arms supplies as one of the reasons behind the escalations. However in the end China also called for the de-escalation and the resolving of conflict using peaceful means.

There are no doubts, that President Putin has chosen the most aggressive scenario from a whole range of options he had on the table. Since there have been no perspectives for the implementation of Russian demands by NATO and Ukraine (these included a de facto neutralisation of Ukraine, the withdrawal of NATO from the Eastern Flank and adjustment to the strategic weapons treaties), Kremlin has decided to forcefully coerce Ukraine into its demands. The Russian goal in Ukraine most probably involves gaining a full control of Kiev (including Russian Spetsnaz operations aimed directly against top Ukrainian politicians) and the changing of government into a pro-Russian one that would certainly agree on all Russian conditions, including Ukraine becoming a satellite of Russia. Currently the chances for a diplomatic solution are slim to none. For now, all depends on the determination on the forces and civilians defending Kiev and other Ukrainian cities. In the worst case scenario, the government and military command can move to Lviv to continue the running of the state and commanding the defence of Ukraine. If the Ukrainian defenders will hold their position, than this may mean that the Russian invasion will turn into positional warfare. This will certain lead to numerous Russian casualties that paired with Western sanctions may force Putin to look for diplomatic solutions. NATO and EU member states should, on top of imposing sanctions, also increase their military aid to Ukraine. One solution could be the donation of older post-soviet equipment to the Ukrainian Army, since it would not require a lengthy training (Ukrainian soldiers are familiar with majority of popular soviet armaments). These may include BWP IFVs, T-72 family tanks, MiG-29 fighters  and other obsolete equipment in use in CEE’s armed forces.