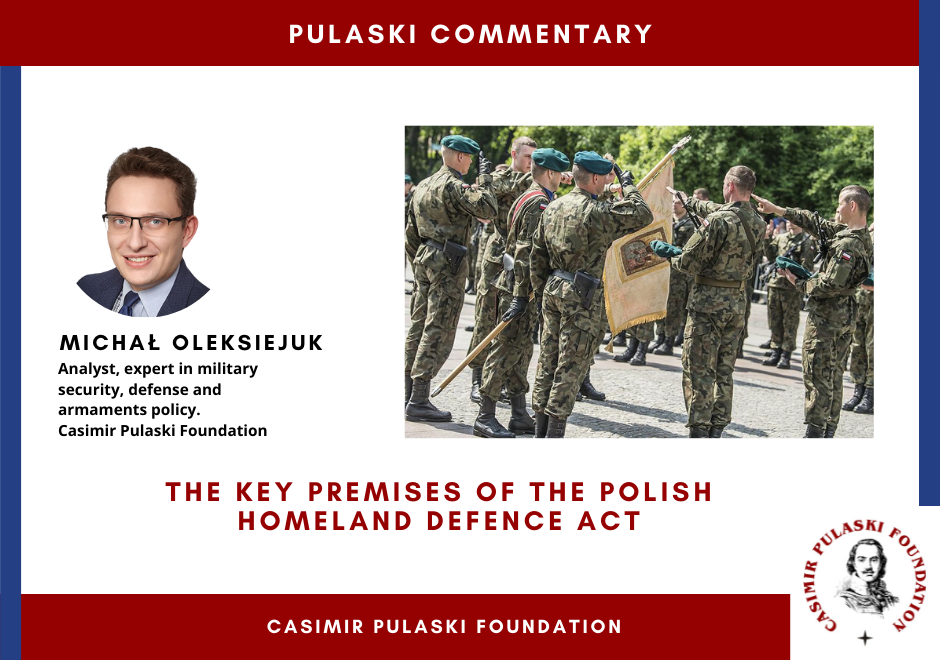 A comprehensive reform of the Polish Armed Forces, announced over a year ago, has significantly accelerated since the outbreak of the war in Ukraine. The Homeland Defence Act (HDA) was first announced by the government in October 2021. On March 17, 2022 it has been approved by the Polish Senate and only a day later it also received a formal signature of approval from the President of the Republic of Poland. The most important assumptions of the HDA in its current form include an increase in defense spending to the level of 3% of GDP in as early as 2023, an increase in the size of the army and the extension of the financing model of the Polish Armed Forces with funds from outside of the dedicated budget of the Ministry of National Defense. For many years, military, veteran and expert circles have been calling for the changes currently proposed as a part of HDA, and which became even more pressing after Russia’s invasion of Ukraine.

The official presentation of the first draft of the Polish Homeland Defence Act (HDA) took place on October 26, 2021 in the Polish Parliament (Sejm). Deputy Prime Minister Jarosław Kaczyński and Minister of National Defense Mariusz Błaszczak emphasized that its overriding goal is to further modernize the Polish Armed Forces, increase the attractiveness of army service and implement the concept of universal defense on a wider scale. Although the provisions of the act were drafted even before the Russian aggression against Ukraine, it is clear that the document was prepared with an aim to counteract the aggressive and expansionist policies of the Russian Federation in the region. During its preparations, the Russian Federation has already accumulated significant military forces in Belarus once (May 2021) and supported the Minsk-controlled migration crisis on the Polish-Belarusian border. Importantly, the Ministry of National Defense announced that due to the exceptional situation in Eastern Europe, further changes to the Act were introduced to further accelerate the expansion and development of the domestic armed forces. Most of these changes were approved by the Parliamentary National Defense Committee and became an integral part of the final project. The act was adopted in an express mode thanks to the cross-party alliance of PIS, KO, The Left and Poland 2050 parliamentary parties. 450 MPs voted in favor of adopting the HDA in the Sejm (nobody voted against, 5 MPs abstained), while in the Senate (higher chamber of the Polish Parliament) all 97 senators supported its introduction. On March 18, 2022 the HDA received a formal signature of approval from the President of the Republic of Poland – Andrzej Duda.

The Homeland Defence Act is a document consisting of over 450 pages, which is to replace 14 older laws and acts regulating the structure of the army, it’s financing and the functioning of the reservist system. Some of the acts being replaced are almost 50 years old, while the oldest and most important of them – the Act on the Universal Duty to Defend the Republic of Poland – has been approved in 1967 and has only undergone a few minor amendments since then. The most important assumptions of the final version of HDA – taking into account the amendments announced by the Polish MOD on March 3, 2022, after the war broke out in Ukraine – include:

It is worth emphasizing that a number of amendments were introduced to the original bill, proposed both by the ruling party as well as by opposition parties. The most important ones included the inclusion of the Armed Forces Modernization Fund under parliamentary control, as well as employment guarantees for all (i.e. 3,000) employees who are currently employed by the soon to be disbanded Provincial Military Staffs and the Military Recruitment Commands (Military Recruitment Centers will be established in their place). The Sejm also agreed to adopt the Polish Armed Forces Strengthening Package planning document for the years 2023-2025, which is to be developed by the Council of Ministers and is to include the most important tasks in the field of arming and equipping of the army with modern equipment, as well as plans to increase the number of armed forces personnel. Amongst the 39 rejected amendments were those ordering the spending of 50 percent of the MOD budget on Polish producers and the one that gives every adult in Poland (without prior convictions) access to firearms.

As a whole, the Homeland Defence Act implements many postulates that have been pursued by military, veteran and expert circles for a long time. In the era of aggressive actions by the Russian Federation and the ongoing war, the increase in defense spending to the level of 3%. GDP  in 2023 is a reasonable decision. Further expansion of the budget of the Ministry of National Defense with the Armed Forces Modernization Fund will allow for even faster and more comprehensive replacement of equipment and the acquisition of new combat capabilities. Although it is too early to be able to draw binding conclusions from the war in Ukraine, the need to expand and disperse the Polish Air Force, as well as the need to implement modern air defense systems and portable anti-tank launchers, is already a clearly visible assumption in the current phase of the conflict. Additional money provided by the HDA will allow for at least some of those needs to be met. The further development of the personnel potential of the Polish Armed Forces also coincides with the conclusions drawn from the observation of Russian aggression in Ukraine. The introduction of a new system of financial incentives is a good way to keep experienced soldiers in the army, but the level of 300,000 planned troops as announced by the Minister of National Defense, Mariusz Błaszczak seems to be too ambitious, even unrealistic. The financial needs necessary to maintain such a manpower, even with an increased budget of the Ministry of National Defense, would mean limited possibilities of acquiring new equipment since most of the money would go towards personnel expenditures. Even a slight slowdown in the purchase of new equipment would then adversely affect the operational capabilities of the domestic armed forces, which during a potential conflict must be ready for clashes with slowly but systematically replaced and improved Russian armed military systems.