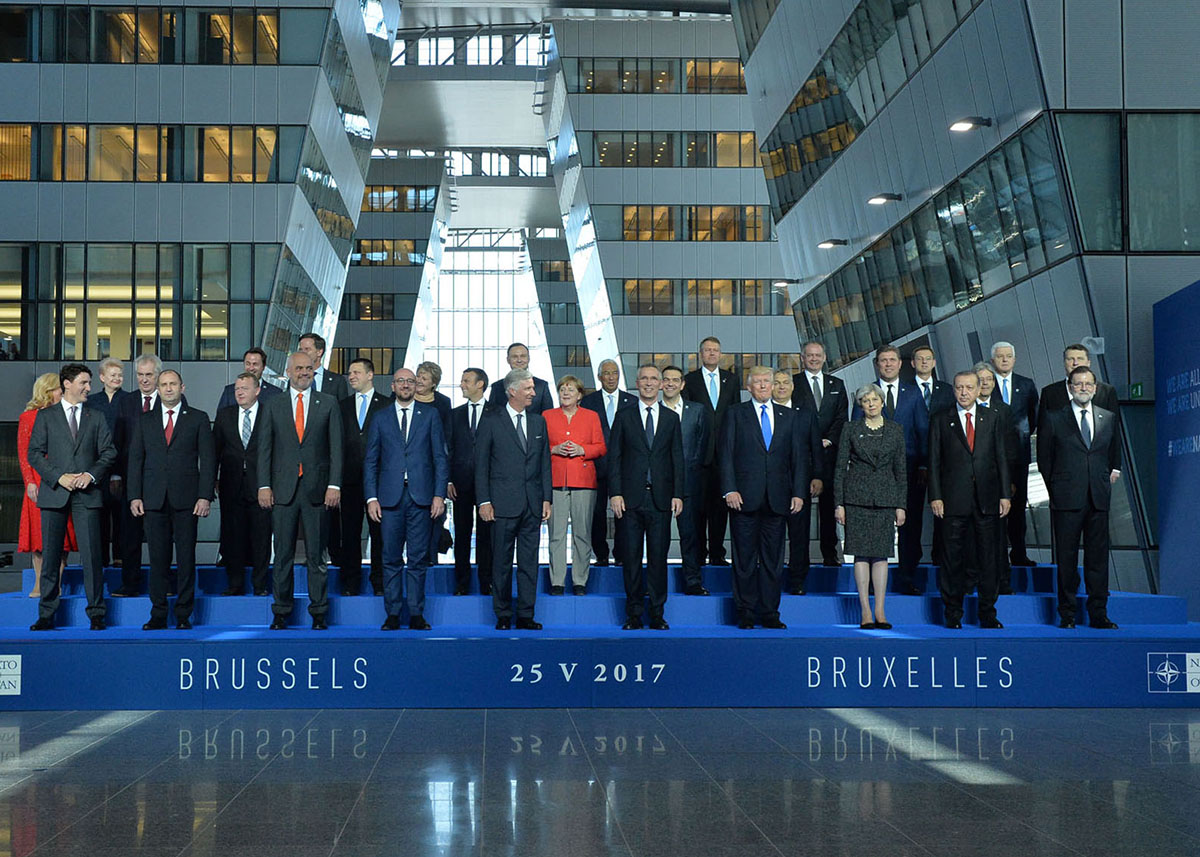 The meeting of NATO heads of state on May 25 in Brussels, dubbed the “little summit,” did not bring any breakthroughs. Still, it was far from just a routine gathering. Symbolically, it introduced the new NATO headquarters, as well as stressed the Alliance’s modernization. It was seen as a demonstration that NATO is neither behind the times nor underfunded, as the Trump campaign has alleged. The modern headquarters symbolizes the Alliance’s ability to develop and proves its liveliness in a dynamically changing world.

The Brussels gathering was marked by the first meeting of NATO heads of state since U.S. President Donald Trump and French President Emmanuel Macron came to power. Trump’s critical statements towards NATO, especially during his electoral campaign, brought some uncertainty before the summit. Experts and leaders feared pushback on some deep reforms. Those apprehensions, however, as well as other bleak scenarios that were conjured up before the meeting, did not materialize. President Trump did not uphold his earlier objections and reservations, but rather adapted a conciliatory tone. He confirmed the legitimacy and purposefulness of the main NATO principles and thus demonstrated willingness to implement provisions of the July 2016 Warsaw Summit.

Many capitals, however, noted a shift in priorities. Particularly, there was no reference made to Article 5 of the Washington Treaty (NATO’s collective defense clause), even though the will to uphold this general rule could clearly be read from the spirit of Trump’s remarks. Still, many states, particularly in the Eastern flank, hoped to hear a direct declaration, as all previous U.S. presidents have provided in the past.

Another declared priority was the war against terrorism, which comes at the cost of putting less attention on threats from Russia, which dominated discussions in Warsaw in 2016. This setting of priorities, combined with differences in perceptions of Russia between European leaders and Trump, leaves space for speculation on possible course changes in the U.S. and NATO’s policies toward Moscow. Officially, prolonging NATO’s military presence in the Eastern flank beyond 2018 was confirmed – this was largely expected by Central and Eastern European leaders. Still, concerns about the fate of the mission on the Eastern flank remain.

Undoubtedly important was a declaration that NATO as an organization will join the coalition against ISIS. As there are no imminent practical consequences for such a declaration, it bears a symbolic significance. It is important to stress this decision got strong backing from the Eastern flank states, particularly Poland. Polish authorities, justifying this position, stress that threats and challenges associated with terrorism originate in the same area as threats to the Eastern flank. A balanced and coordinated answer – that is, by NATO – is therefore needed.

One of the practical aspects of the decision to join the anti-ISIS coalition is the establishment of a terrorism intelligence cell within NATO’s new Intelligence Division, which will allow NATO to improve information-sharing among Allies. This is the next step in the reformation of the NATO intelligence system, which was initiated at the Warsaw Summit by the creation of a new post, Assistant Secretary-General for Intelligence and Security.

The highlight of the Brussels meeting was Trump’s criticism of the 23 member states for not meeting the requirement of allocating two percent of their respective GDPs toward defense – and a call for a quick correction. This criticism, despite being justified, was met with mixed feelings, if not disgrace, by the countries concerned.

Most of the states agreed with the need to increase spending on defense, which was embodied in numerous declarations by the leaders during their meetings. However, the style in which Trump raised the issue made a bad impression. A highly mercantile approach towards allied cooperation marked a departure from standards upheld within NATO since its establishment. A spirit of partnership combined with a sense of solidarity, which was behind the foundation of Article 5, is at odds with Trump’s language and business-like economical calculations. This observation raises questions about the Alliance’s imminent future, particularly in relation to cohesion within its leadership and to an atmosphere of understanding of the needs of other member states. There is no doubt that Trump brought a new, unfamiliar style to the group; time will tell whether it will be a new, persistent feature of the American administration’s approach, and how it will affect NATO.

Lastly, a highly important and significantly underreported element of the Brussels mini-summit related to the introduction of Montenegro as NATO’s 29th member. Eight years ago, NATO welcomed Croatia and Albania into the Alliance. In 2017, NATO is again opening its doors to another Western Balkan state. It is a symbolic and multidimensional event. First, it proves the persisting attractiveness of the Alliance in difficult times, and its resilience and ability to conduct proactive security policies in the Balkans. One must remember that Russia has traditionally claimed a sphere of influence in the region, which includes Montenegro. There is no doubt that Russia will continue attempts to influence the situation in the country, which would pose a new challenge to NATO. Finally, Montenegro’s accession provides NATO with a historic chance to change the European balance of powers and to increase political-military stability in the region.

In summary, the NATO heads of state meeting did not bring any breakthroughs; but one could still call the summit successful, despite the above-mentioned shortcomings. Grim scenarios heralding upcoming crises or the breakup of the Alliance did not prove correct. Leaders demonstrated unity, despite differences in opinions, which is normal in such a big and diverse organization. Importantly, the main ideas, which linked all the member states and NATO priorities during the Warsaw summit, were upheld. The near future will show whether Trump’s new style of politics and the U.S. administration’s new goals and methods will bring positive changes to the organization or weaken it. There is no doubt that after moving into the new headquarters, NATO will face new changes. Hopefully, these will be for the better.