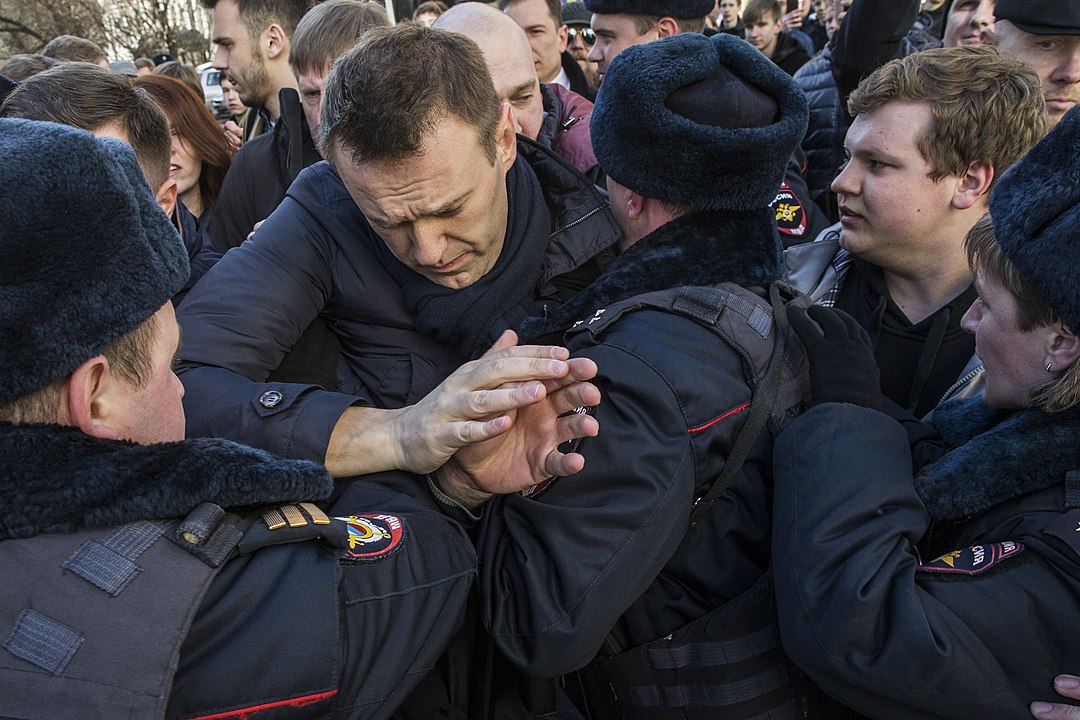 Alexei Navalny returned to Russia on January 17, 2021. The oppositionist decided to take this step, despite the attempts from the Russian elite to discourage him from doing so. After the publication of the results of the Bellingcat and the Insider’s investigations, which identified eight associates of the Federal Security as being responsible of poisoning attempt of the opposition activist, all the Kremlin’s attention was aimed at Navalny. At the end of December 2020, there was information about a new criminal case against the leader of the opposition and an attempt to change  the suspended prison sentence from 2014 into an imprisonment. Navalny’s return to the country despite these risks confirms the inability of the Russian authorities to overcome the repressive modus operandi.

The oppositionist had a choice of either remaining in exile, where his political influence would probably run out, or raising the political stake and returning to his homeland. He chose the second option, which was recognized not only as an unprecedented act of courage and a confession for the Russian authorities, but for many experts it broke the established pattern in which they are the rulers, who impose an agenda of actions.

The unexpected return of Kremlin’s greatest critic caused a hysterical response of the government. The gathering of the force structures at the Vnukovo airport, where Navalny’s plane was to land, the arrests and attempts to disperse the supporters of Navalny, and then redirecting of plane to Sheremetyevo airport and Navalny’s arrest of the oppositionist during passport control, were only the first nervous acts by the government. The next day, in violation of many court proceedings, a court hearing was held at the police station imposing preventive measures on Navalny, and temporarily putting him under house arrest for 30 days (on February 2, there will be a hearing on the activation of the sentence from 2014).

This attempt to neutralize the threat, whatever the opposition perceives the Kremlin, did not go unanswered. Navalny and his supporters began calling for a street protests on January 23, and the Anti-Corruption Foundation, funded by the activist, released a video titled “Palace for Putin. The story of the biggest bribe”. It shows a palace complex (unofficially) owned by the President of Russia, with an estimated value of 100 billion rubles and a size of almost 18,000 m2. The film, which already has over 100 million views on YouTube, not only guides the viewer in details around the lavishly decorated interior of the palace and shows the objects belonging to it, but also thoroughly discusses corruption patterns in Russia and supports the thesis that the head of the Russian state has an insatiable appetite for wealth. The material, as well as the whole situation related to the arrest of Navalny, was widely commented not only by independent media, but it also caused a considerable resonance in social networks, which were even “flooded” with anti-Putin content. On TikTok, posts  the Navalny hashtag gathered over 200 million views.

Before the 23rd of January’s protests, law enforcement agencies announced that they decided to take a wide range of preventive actions. Police officers rushed to the homes of Navalny’s fellow activists and associates with the intention of arresting them for inciting or encouraging participation in an illegal action. In schools and universities warning messages against going out on the streets appeared and parents of adolescents were called not to let their children leave the house on the day of the protest. Many experts believe that this propaganda venture was counterproductive – it became an advertisement and a source of information about the protest for those who had not heard about it.

In the end, protests took place in no less than 125 cities in Russia (some sources say 196 cities), and hundreds of thousands of people took to the streets across the country. In terms of numbers and geography, it is the largest street protest in post-Soviet Russia. The toilet brush from the video on Putin’s palace, for which the president paid 700 euros, became the symbol of the protest.

In connection with the protest, over 4,000 people were detained. The first criminal cases against the protesters are already pending and the authorities also are carrying out searches in the houses of Navalny’s associates, and detaining activists and independent journalists. Although tougher repressive measures initiated after the action on January 23rd this year were implemented, they did not stop many Russians from taking part in another demonstration on January 31st this year

Contrary to the attitude of Navalny, who showed courage despite the authorities’ attempts to intimidate him, the Kremlin’s reaction to his return is perceived by many observers of Russian politics as hysterical, confirming the ruling elite’s fear of the opposition’s leader. Navalny’s strength certainly does not lie in the rankings of public support, because, according to independent public opinion polls, only 2 percent of respondents would see him as president of Russia. However, the oppositionist is the one who excels at showing the weakness of the system. The extent of the government’s abuses and corruption is widely known, but he reveals the true enormity of its scale. The videos prove that not only the authorities can track and control citizens, but that citizens can and should look at the authorities’ hands, and thanks to new technologies it will no longer be possible to hide the dark sides of government activities. Navalny showed that “the king is naked”, which not only causes outrage in society, but also makes the Kremlin a laughing matter. Such a combination threatens the legitimacy of the government, the more so that in a few months the elections to the State Duma will be held. Meanwhile, those in power have less and less to offer the public outside of the so-called “Crimea effect”, based on a sense of pride in a state that has challenged the West. The system has become extremely ineffective, unable to ensure sustainable economic growth and stop the decline of the incomes. Paradoxically, by showing the scale of the absurdity in the Russian system, Navalny provoked the authorities to amplify  hysteria. The personal fears and phobias of the people in power have become the engine of the operation of the entire system, aimed at intensifying repression against the dissatisfied activists, who are more and more numerous. Therefore, the real problem of the rulers is not Navalny himself and his associates, whose activities act as a mirror reflecting system errors, but they themselves and their shady businesses. The strategy adopted by the Kremlin is focused on stopping and persecuting activists, and although it may be effective in the short term, it will not solve the basic problem of the decline in confidence in the ruling party, growing frustration and social discontent. Russian experts agree that the protests alone are not a sufficient factor in changing the system, and a split in the Russian ruling elite is needed for this. Time will tell whether the ruling class will remain strong and united despite the ongoing process of desacralisation of the state leader.

Author: Dr hab. Olga Nadskakuła-Kaczmarczyk, Research Fellow at the International Politics Programme of the Casmir Pulaski Foundation, the Pontifical University of John Paul II in Krakow, author of the YouTube channel “RuSMI, or what Russia lives”

PULASKI POLICY PAPER: T. Otłowski – The new U.S. administration's policy toward the "wider" Middle East and the threat from Islamic terrorism – an attempt to forecast