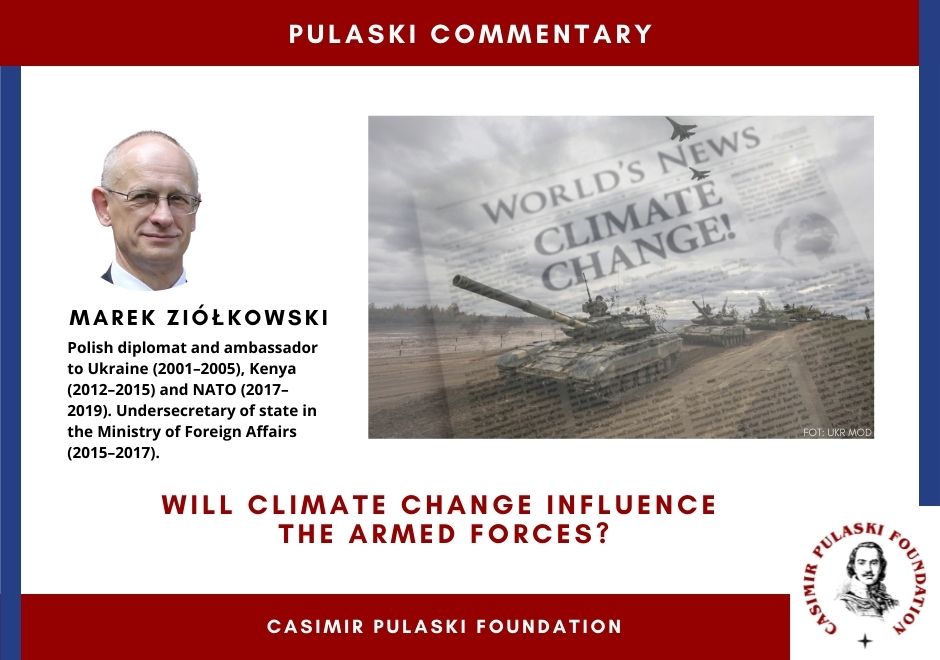 Following the recent NATO summit and Western sanctions hitting Russia’s fossil fuel industry, it seems that climate issue will increasingly affect the development of the armed forces of Western countries. Allies have formulated their own policies on climate change and the defence industries of the Allied countries are joining the global decarbonization policy.

The Madrid NATO summit, both in the final declaration and in the Alliance’s strategy, referred to climate change as a key challenge of our time, significantly affecting the security of the Allies. This general observation was complemented by the decision to significantly reduce greenhouse gas emissions by Allied infrastructure and military structures. Allies pledge to improve energy efficiency, invest in clean energy sources and use green technologies, while ensuring military effectiveness and a credible defence and deterrence attitude.

Russia’s war against Ukraine has outlined new areas of rivalry between the West and Russia: political and economic sanctions, diplomatic isolation, strengthening Ukraine’s defence capabilities, etc. One such field of rivalry between the West and Russia is the reduction (in the long term) of fossil fuel consumption, which, adding sanctions on their import from Russia (in the short term), could lead to a permanent reduction in Russia’s economic potential and enable the West to reaffirm its decarbonization policy. It also means considerable challenges for the defence sectors of NATO and the EU.

U.S. President J. Biden during his visit to Warsaw, on March 26th, 2022 argued that the geopolitical importance of fossil fuels is running out. „Europe must end its dependence on Russian fossil fuels. And we, the United States, will help make that happen. That’s why yesterday in Brussels, together with the President of the European Commission, I announced a plan to lead Europe through the energy crisis. In the long term, for the sake of economic and national security, and for the sake of the survival of the planet, we all need to start using clean, renewable energy as soon as possible, and we will work together to help make that happen,” the US President indicated. It could be said that the ‘green revolution’ is becoming part of the Western defence policy towards Russia. However, this type of weaponry belongs to the realm of politics and diplomacy, not the military, so the direct role of the armed forces is limited. The war in Ukraine does not, therefore, fundamentally change the limited action of the armed forces on climate change to date.

However, due to the increased importance of climate security issues, both within NATO and the EU, the defence industries of individual states are undertaking risk mitigation projects related to climate change. In both organizations, climate change is described as a security threat multiplier. From this point of view, they have an impact on national security and their analysis should therefore be taken into account in foreign policy and defence strategies. In this context one points out to planning the infrastructure and logistics of the armed forces in accordance with the long-term consequences of climate change, reducing CO2 emissions, building low-carbon criteria into procurement standards for purchased products or creating own sustainability strategies by companies of the defence industry .

Some allied countries such as the United States and the United Kingdom issued reports on climate risks for national defence in 2021 (respectively: US Department of Defense Climate Risk Analysis, UK Ministry of Defence Climate Change and Sustainability Strategic Approach). Moreover, in March this year the Department of Defense’s draft budget for the 2023 financial year included USD 3.1 billion for so-called ‘climate investment’ (in 2022 it was USD 617 million). Both the criterion of financial and operational cost-effectiveness and the political and public pressure to define the tasks of the armed forces with regard to climate change mitigation play a positive role in this context. It has only recently been recognized in the armed forces of Western countries (after a number of hurricanes and floods in the last decades) that military bases and defence installations should be built with the consequences of climate change in mind, and that military infrastructure powered by renewable energy can be cheaper than traditional energy sources and more resilient to cyber attacks due to the independence of the energy source from the grid (destroying a solar or wind farm requires a much larger force or a bigger number of missiles than hitting a typical transformer).

Defence sectors also need to take into account their own governments’ commitments to reduce CO2 emissions. The US Department of Defence is reproached for being the world’s largest institutional emitter of greenhouse gases, and Defence Secretary L. Austin admits that climate issues are integral to national security. The UK Department of Defense’s work on climate change is led by retired General Richard Nugee, who also uses public appearances to promote a policy of climate neutrality in the armed forces. Nugee was one of the few armed forces representatives among the hundreds speaking at COP26 in Glasgow. There he announced that the British military would reduce its CO2 emissions to zero by 2050, while not reducing its combat power. This is a prospect almost as revolutionary as the aspirations of climate activists for full climate neutrality by 2050.

Climate and the defence industry

The issue of climate change is thus becoming part of the official policy of the defence departments, to which the defence industry is responding. This is evidenced, for example, by the decisions of the BAE Systems corporation, (co-manufacturer of the Eurofighter Typhoon aircraft, among others) to invest in the development of products that have a lower carbon footprint or that replace dependence on fossil fuels. Tracing the development plans of the world’s other leading arms industry companies (Lockheed Martin, Boeing, Airbus, Leonardo) reveals that each is presenting a program to adapt its operations to the standards of a low-emission economy. All that while maintaining the ironclad principle that equipment should either retain or enhance its existing combat capability. So, on the one hand, formally, government authorities – and indirectly corporations – can benefit from the defence sectors being exempt from reporting emissions under the 2015 Paris Climate Agreement. On the other hand, the incentives for corporations to start researching and developing new types of fuels for aircrafts or ships, or electric propulsion for combat vehicles are the aforementioned directives of the defence departments and their acquisition policies in this area, as well as the strong incentives of the global market environment to introduce low-carbon products. Climate policy itself should not be seen as a threat to existing business models, but as an opening for the development of new approaches and possibilities to take leadership in them. It is worth noting that this is happening at a time of surging sales in the arms market, as well as rising expectations as to the effectiveness and level of defence capabilities of the armed forces. Indeed, following the Russian aggression against Ukraine, after an era of disarmament (including 30 years since the conclusion of the CFE Treaty[1]), Europe and the world are entering a long period of increasing defence budgets.

Currently, it would be difficult to name a major aircraft manufacturer that does not conduct its own research into biofuel or other alternative energy sources . So-called SAF (Sustainable Aviation Fuel) standards are in the process of implementation, several models of electric combat vehicles have been produced and most allied countries have already adopted energy efficiency standards for new military infrastructure and installations. Tesla is already producing armored vehicles, Boeing is testing the ecoDemonstrator (an aircraft that can drastically improve efficiency results by using ‘big data’ and a new type of fuel), Lockheed Martin Sikorsky approved the use of sustainable aviation fuel for the S-92 helicopter in November 2021 and the Korean Defence Development Agency is working on hydrogen propulsion for submarines, etc. These examples are the result of officially announced ‘sustainability’ or ‘go green’ programs by weapon manufacturers.

In some defence ministries, concepts for the armed forces to acquire low-carbon equipment are in the development and planning stages. This trend will intensify as the decarbonization of the global economy progresses and the range of low-carbon products for the military expands, which will influence the acquisition policy of armies worldwide.

In Poland, the aforementioned process still seems to be treated marginally, and the Polish arms industry (PGZ, as well as private companies) does not yet include the issue of reaching low-emission status in its development strategies. The combination of official governmental skepticism towards climate policy and the strong dependence of the Polish armaments sector on the political disposer results in a lack of interest on both sides in any „go green” programs, which may have negative consequences in the future (due to, inter alia, export potential).

Author: Marek Ziółkowski, retired ambassador 2021. In the foreign service of the Republic of Poland since 1991. Concerned with Eastern and security policy. Ziółkowski has been involved in diplomatic service in Belarus, and was Ambassador of Poland to Ukraine, Kenya and NATO. In 2016-2017 Marek Ziółkowski was Undersecretary of State for Eastern Policy.