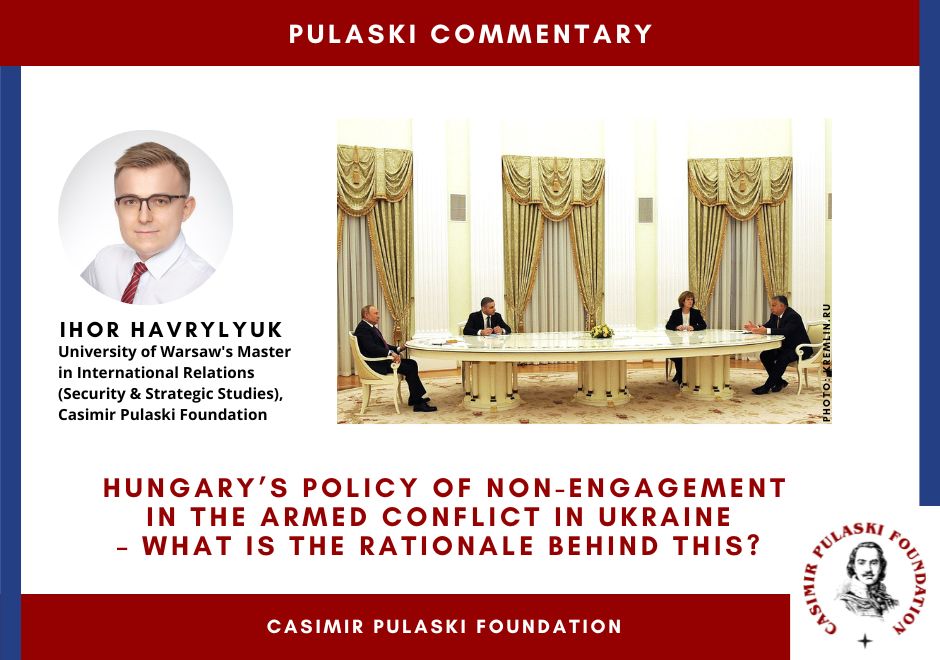 After Russia launched a full-scale invasion of Ukraine on February 24th, 2022, Hungary has been one of the few members of the Euro-Atlantic community that took a cautious stance in regard to providing Ukraine with political and material support. Budapest’s decision not to send its own lethal weapons to Kyiv and not to allow partners to transport military aid through its own territory has been widely perceived as a breach of the Euro-Atlantic unity and has come under criticism even by the regional partners from the Visegrád Group (V4).

On July 19th, 2022, Levente Magyar, Hungarian Deputy Foreign Minister, officially communicated Hungary’s readiness to allow all aid heading to Ukraine, including military supplies, to pass through its territory. Although he reiterated that Hungary would not change its stance on supplying Ukraine with its own weapons. The following day, Zoltan Kovacs, the spokesperson of the Hungarian government, refuted information about giving consent for transit of the military aid intended for Ukraine and called it fake news. It is yet to be determined whether it was a communication blunder or rather an attempt of Ukrainian authorities and media’s attempt to impose a certain interpretation of Magyar’s words, but no matter which version is valid it is important to understand the Hungarian rationale behind the policy of non-engagement. There are a few potential reasons why Hungary has refrained from following the path of its regional partners from V4.

Firstly, Hungary is heavily dependent on oil and gas from Russia, which makes this landlocked Central European state particularly vulnerable to a potential cut-off of the Russian supplies. Hungary imports approximately 80% of its gas and 65% of its oil from Russia. Moreover, on September 27th, 2021, the two countries signed a new natural gas supply contract for 15 years, with an option to renegotiate it after 10 years. Experts from the Institute for Central Europe call Hungarian attempts to diversify sources of natural gas and oil supplies a myth and highlight Hungary’s propensity to intentional reliance upon Russia as a guarantor of Hungary’s energy security. For this reason Budapest is utterly unwilling to back the EU sanctions on Russia oil citing potential severe economic consequences.  It is still crucial to remember that Hungary has been intentionally subjecting itself to excessive reliance on Russian energy supplies.

Admittedly, Germany is another country, which has been overly reliant on Russia as an allegedly reliable gas and oil supplier. In light of these circumstances, Orbán’s government is not expected to support Ukraine at the expense of its own energy security. An abrupt reduction or halt of energy supplies will undoubtedly lead to a price hike, which in turn could endanger the stability of the populistic Fidesz government.  Despite the war in Ukraine and Russia’s threats to cut off energy supplies to Europe, Hungary’s Foreign Minister Péter Szijjártó, paid a visit to Moscow on the 22nd of July, 2022, where he held talks on purchasing more natural gas from Russia.

Secondly, Budapest also has a major investment project with Moscow – the expansion of the Paks nuclear power plant (NPP), which accounts for about half of Hungary’s electricity output. Despite the original idea of launching an international public tender for the project of expansion of the existing Paks I nuclear plant, PM Orbán awarded it to Russia’s Rosatom in 2014. Benedek Jávor, a former Hungarian MP and an environmental activist, cites a list of arguments against the expansion of the existing NPP and hints at the strong political component of this  . There are two important aspects of the deal: funding and technology. Up to 80% of the project costs are covered by a Russian loan, which makes Budapest extremely dependent on the funding from Moscow. According to some sources, the Paks II investment is estimated at EUR 12.5 billion, of which 10 billion is a Russian loan. Expansion of Paks I is also practically impossible without the Russian nuclear technologies, which account for one of the few high-tech export goods of this country. Though a potential withdrawal of the Russians from this project is very unlikely, as it ultimately would give the Kremlin another instrument of leverage over Hungary, Orbán’s cabinet will try to secure this investment in order to get a source of cheap electricity with very low carbon emission, which in turn could be sold to the neighboring countries.

Lastly, there is a protracted conflict with Ukraine over the rights of the Hungarian minority densely populating Zakarpattia oblast. This region, located at the crossroads of Hungary, Slovakia, Romania and Ukraine, was under strong political and cultural influence of Budapest for centuries. According to the 2001 census 150,000 of ethnic Hungarians live in Zakarpattia oblast, which accounts for 12% of the total population of the region.

The Hungarian minority living in Ukraine has become a useful instrument in the hands of Orbán and his party. Andras Nemeth, an editor at a Hungarian independent weekly HVG.hu, cites two reasons why the diaspora is important for the Fidesz-led government from a political  . First, Hungarians living in Ukraine predominantly vote for Orbán’s party and owing to this he can get an additional two or three seats in the parliament to secure a constitutional majority. Secondly, the Hungarian government makes investments, for example in the local infrastructure or businesses, to court its own diaspora, and part of those funds returns back to Hungarian officials in the form of bribery. In order to sustain a stable bond between Hungary and its diaspora, the former also often demands wider autonomy for the latter in the sphere of education, which plays one of the key roles in shaping people’s national identity. The Education Act passed by the Ukrainian parliament in 2017 has been the stumbling block between the two countries; according to this document minority languages can only be taught at the primary stage of education (preschool education and 1-4 grade levels). Under the pretext of violating the rights of Hungarians by Kyiv, Budapest has been repeatedly blocking Ukraine on its path to the European Union and NATO since then. Interestingly, this has been in line with the expectation of the Kremlin which strongly opposes Ukraine’s bids to join the North Atlantic Treaty Organisation. Although rights of all minorities should be respected both under domestic and international law, the Hungarian diaspora has an alarmingly low proficiency level in Ukrainian, which prevents it from actively participating in public life and creates a strong stimulus to migrate abroad. The so-called passportisation in Zakarpattia was possible due to liberalisation of law regulating the procedure of obtaining Hungarian citizenship. Similar practices have been applied by the Russians since 2014 towards the inhabitants of the temporarily occupied territories in Ukraine. The so-called passportisation in Zakarpattia gives Budapest a free hand to interfere into Ukraine’s internal affairs under the pretext of protecting Hungarian citizens. Additionally, it creates breeding grounds for ethnic tensions and separatist movements within the region.

Politically and economically destabilised Ukraine would be more suitable for the restoration of the historical ties with Kárpátalja  (Hungarian name of the Zakarpattia oblast), which Budapest will ultimately strive to achieve. For this purpose, in 2018 the Hungarian government appointed a ministerial commissioner for the development of Zakarpattia Oblast, which caused a backlash in Ukraine. Statement made by Péter Szijjártó in a recent interview with Index.hu, where he stated that Budapest has a plan to protect its own ethnic minority in Ukraine from hostilities were to approach Zakarpattia, serves as an additional blow to Ukraine’s  . In the short time mistrust and colliding national interest will be an obstacle to achieving amicable relations between Budapest and Kyiv.

In the short term perspective it is unlikely that Orbán will profoundly change his approach towards the war in Ukraine. Apart from not sending its own weapons and not allowing military aid for Ukraine to transit Hungary’s territory, the officials in Budapest have been lobbying for decisions, which may be detrimental to Kyiv, e.g. arguing that Western sanctions are not working. Whereas it is generally common to have opposing interests in the international relations, Hungary is showing strong inclination to support certain visions of the conflict resolution, which inevitably involve fulfilment of the Russian demands. Numerous statements regarding the Russian invasion of Ukraine made by Orbán and Szijjártó are in line with the Kremlin narrative. Current top officials of Hungary tend to blame Ukraine and the West while at the same time justifying the unprovoked act of aggression committed by the Kremlin. It is no surprise, especially in the light of the Orbán’s and Putin’s illiberal style of ruling, Hungary’s dependence on Russia in the sphere of energy and hostile attitude towards the campaign of Ukrainisation.